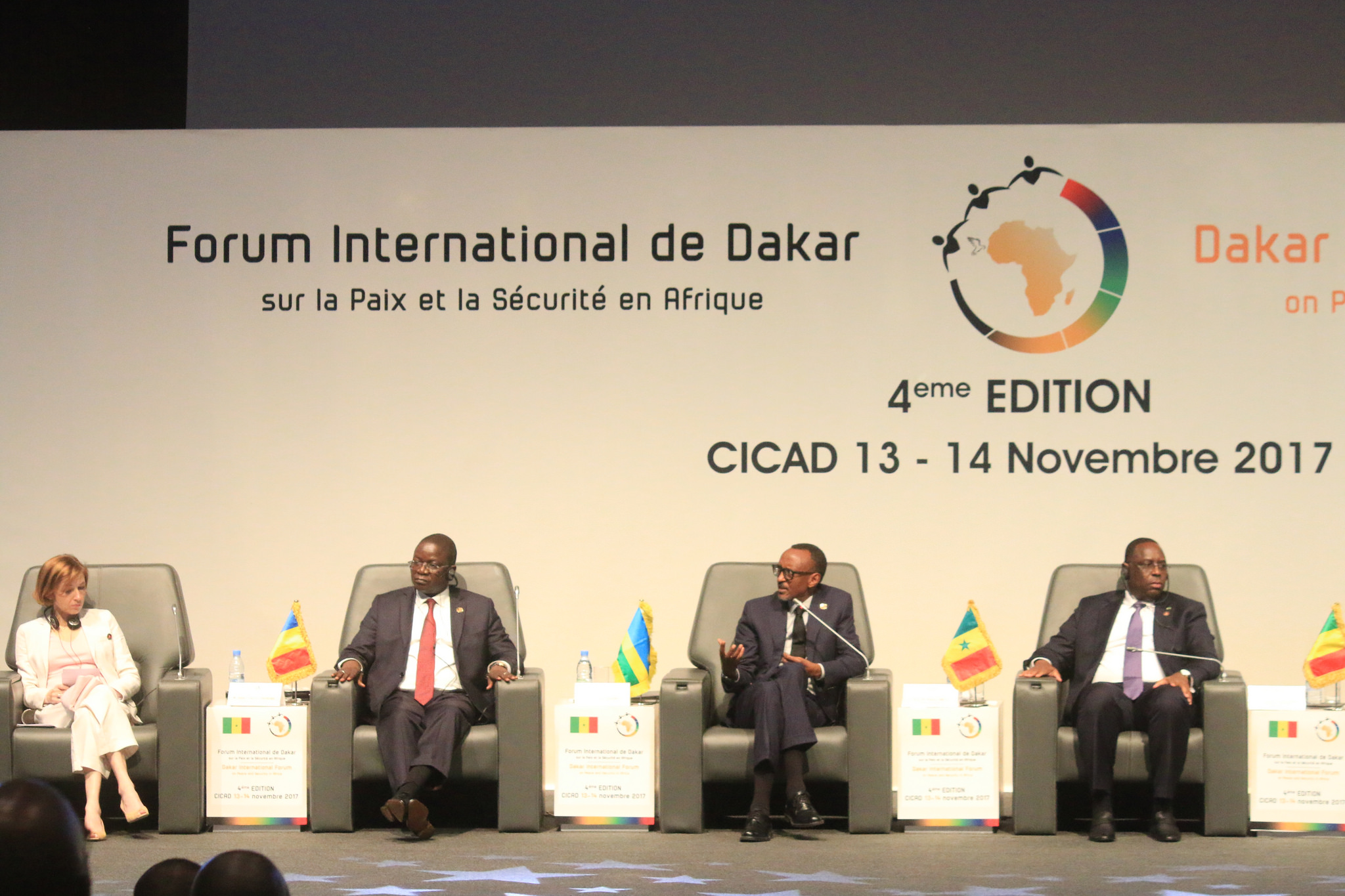 President Kagame (3rd from left) attending the forum with other leaders

President Paul Kagame has said that the ongoing security threats hitting the African continent are solely caused by one big factor; lack of collaboration among Africans.

Kagame was addressing the fourth edition of the Dakar International Forum on Peace and Security in Africa taking place in Dakar, Senegal.

“Allow me to emphasize that insecurity flourishes when we fail to cooperate with each other. Across the continent, insecurity hits up with endless killings of people especially in Somalia and other parts of the continent.

While African leaders have been emphasizing on operations against security threats, Kagame said that one important missing factor is; the citizens.

“Stability is built on a foundation of trust and rising prosperity from which all Citizens benefit,” Kagame said.

By defining insecurity, President Kagame told the forum that: “Insecurity takes many forms, from security to uncontrolled migration to divisive politics.”

The fourth edition of the forum is themed, “Current security challenges in Africa: towards integrated solutions.”

The forum brings together close to 400 participants from high-level regional and international political and military authorities, experts, academics from the African Union, the European Union and the United Nations as well as civil society. 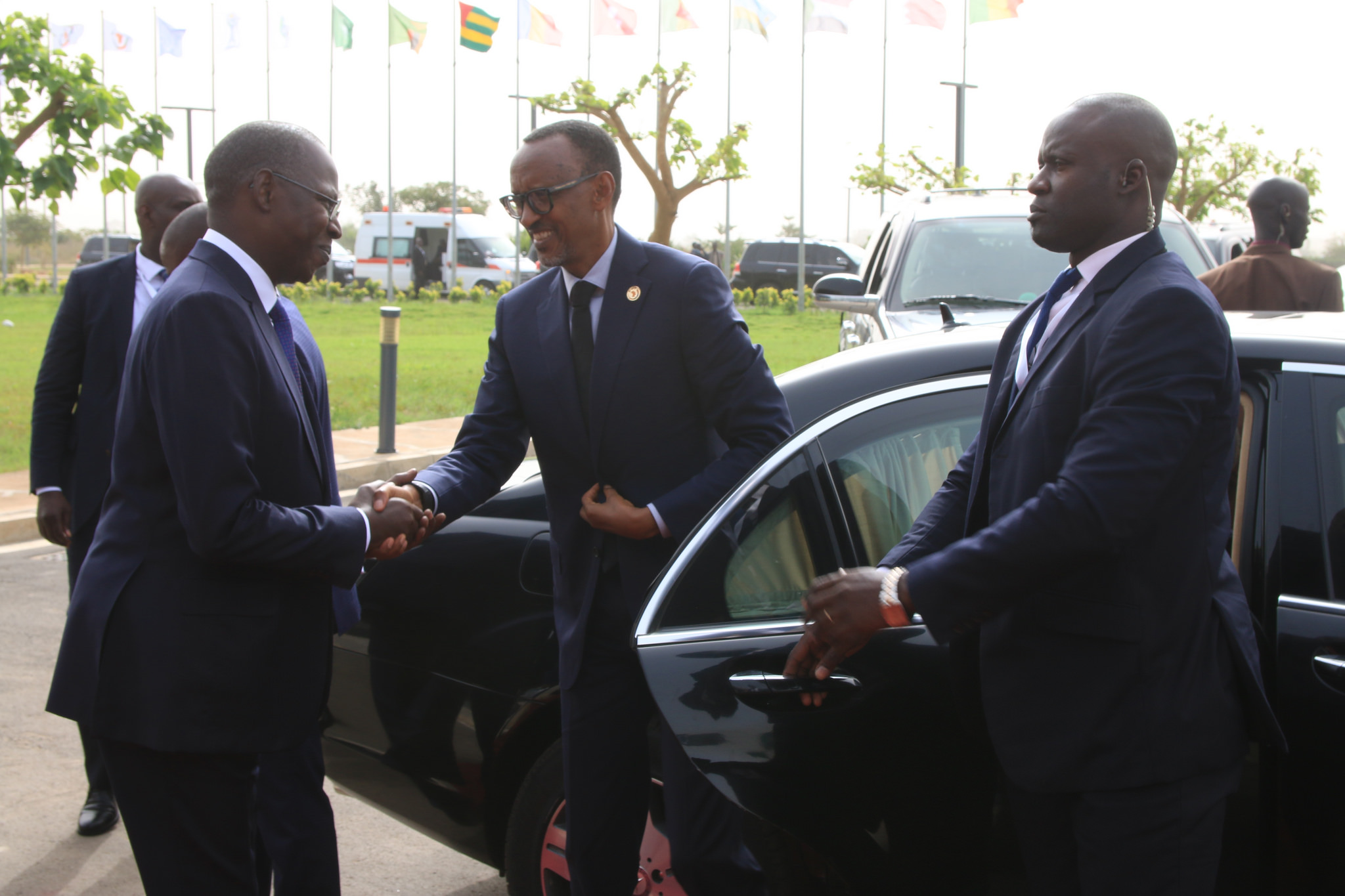 Kagame  received at meeting venue of 4th edition of the International Forum on Peace and Security in Africa | Dakar, 13 November 2017

In his address, Kagame extended his wish for cooperation beyond the continent, saying “African unity and resolve does not negate the importance of productive collaboration with external partners.”

The President however reminded that “If we allow others to define our problems and take responsibility for solving them, we have ourselves to blame.”

To achieve self-reliance across the continent, Kagame said “A logic that a consultative form of politics in which citizens and private sector are involved, offers the best prospects.

The President called for collaboration of governments and private sector without leaving citizens behind. This is the logic behind our experience in Rwanda,” he said.

The President acknowledged steps taken to have a unified Africa – giving an example of the African Union (AU) reforms – a continental body that brings together all member states.

“A major pillar of institutional reform of the AU is a more focused and assertive Africa. This means coordinating among ourselves as Africans,” he said.

For President Kagame, “The spirit of collaboration must extend beyond governments.”

He thanked his counterpart and host President Macky Sall and partners for contributing to the success of the forum.

Meanwhile, this year’s forum convenes amid growing threats of insecurity across the continent.

According to the report on State of Peace and Security in Africa 2016, a total of 17,539 violent events were recorded last year, with Libya, Somalia, South Sudan and Nigeria accounting for 33% of these events.

The report also says there were 8,050 conflict-related fatalities and 5,098 migrant deaths recorded; new armed groups and militias as changing the conflict landscape in Nigeria’s Niger Delta and Eastern DRC as well as a surge in the number of riots and protests with 20% occurring in South Africa and 11.2% in Tunisia.

According to the report which is prepared annually for the Tana High-Level Forum on Security in Africa, countries with the most reported cases of rape and gender-balanced violence in 2016 were Sudan, South Sudan, Central African Republic (CAR) and DRC.