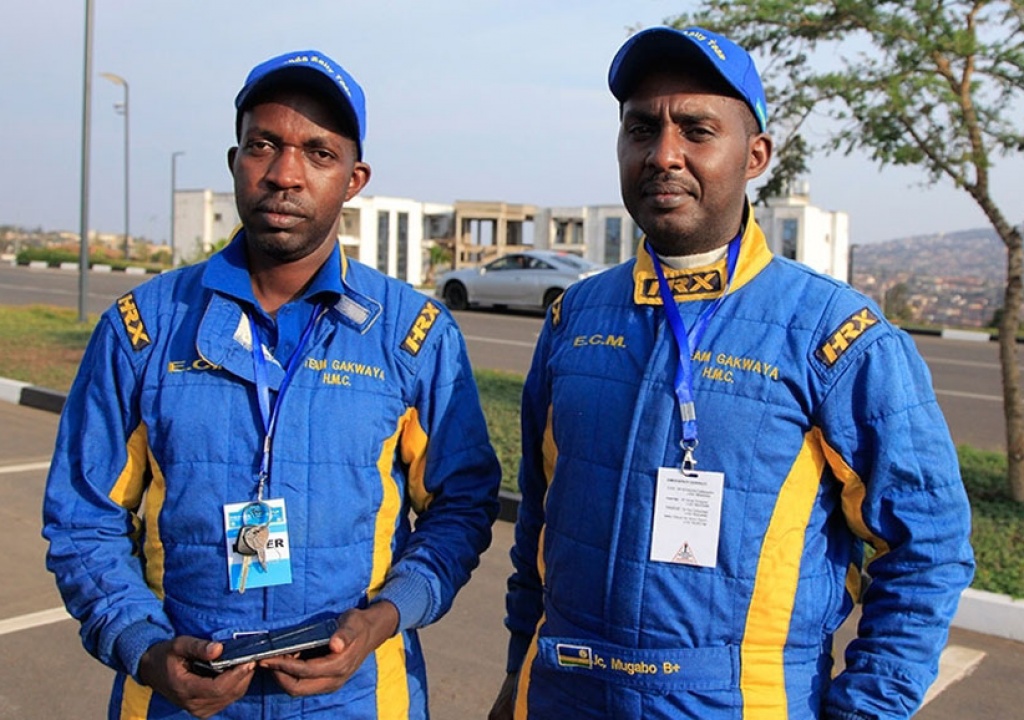 Gakwaya Jean Claude (Left) and his navigator Mugabo (Right) in a past rally championship. Gakwaya has won the 2017 National Rally Championship.

Rwandan Gakwaya Jean Claude is the winner of the Rwanda National Rally Champion despite not competing in the final rally of the season- Rallye des 1000 Collines- which was won by Burundian Giesen Jean Jean over the weekend.

Giesen navigated by Dewalque Yannick in a Toyota Celica claimed the Rallye des 1000 Collines held over the weekend in the roads of Nyamata, Gako, Nyagihunika, Kamabuye and Rilima, covering a total distance of 168.22km in one hour, 39 minutes and 13 seconds.

The closest Rwandan Nyiridandi navigated by Remera Regis in a Toyota Celica finished fourth clocking two hours, 13 minutes and 20 seconds. Nyiridandi’s fourth position could not enable him to displace Gakwaya off the top spot as he only garnered 55 points, 12 points behind the eventual champion.

Gakwaya never took part in the final rally of the season after his Blue Subaru Impreza’s engine broke during the Huye Rally held two months ago, hence was unable to replace it in time for Rallye des 1000 Collines.

The National Championship started with the Gorilla in the Mist rally in Uganda (March 3-5), followed by the Sprint Rally held in Nyamata (May 20), Uganda Pearl of Africa Rally (June30-July 2), Rwanda Mountain Gorilla Rally (September 8-9) while the most recent event was the Huye Rally held last month.

Jean-Claude Gakwaya has dethroned the Ugandan pair of Ugandan Pole Pole Wilbert and Bashir Mbogo–Mitsubishi Evolution VI (Kajala Rally Team) as the champion of the Rwanda National Championship with 67 points.

#Umushyikirano2017: Rwanda Is Resilient than Ever Before – Kagame