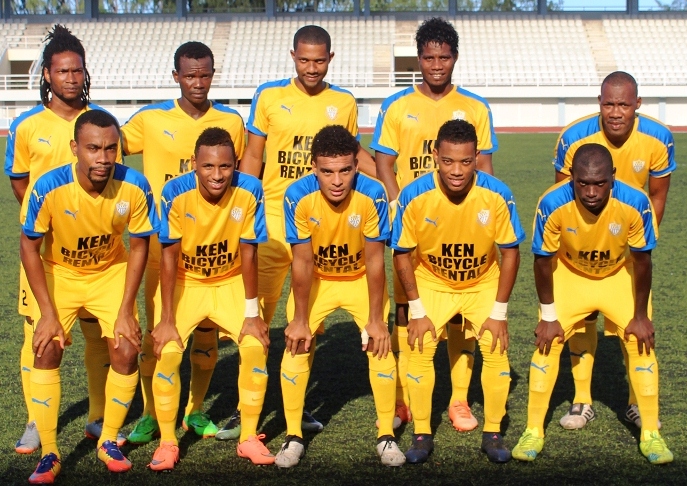 Seychelles side Anse Reunion is in Rwanda since Wednesday acclimatizing ahead of their Sunday’s first leg clash against APR FC at Amahoro Stadium. Courtesy Photo

Seychelles side Anse Reunion is expecting a tough opposition when they play APR Fc in a two-legged match of the CAF Confederation Cup this year.

The La Digue outfit which arrived in Kigali on Wednesday faces Peace Cup holders APR Fc in the first leg at Amahoro Stadium on Sunday.

Anse Reunion head coach Ted Esther told Seychelles local papers that their clash against APR is a tough encounter for his players.

Esther has sought help from license ‘A’ coach Ralph Jean-Louis, the former national team head coach who guided his former club St Michel to a number of wins in African club competitions to assist him in negotiating a tough APR Fc boundary.

Coach Esther had to seek help for this African club competition as he does not hold a licence ‘A’ coaching badge and he expressed his gratitude to coach Jean-Louis who accepted to help them for this two-legged tie.

“Our preparation started rather late as the players were not regular for training at first but they appear to be highly motivated as the match approaches. But we are aware that it is going to be tough after playing only two test matches,”

“We also have some information about our opponents who appear to be a top-class side. So we will try to get a positive result in this first leg,” explained coach Esther.

Anse Reunion though have failed in their bid to sign Ghanaian striker Emmanuel Ankrah from St John Bosco and will be without Jude Anaou and Adrian Constance for the first leg but can count on their four foreign players, namely Malagasy defender Eddy, Tanzanian midfielder Rashid Gumbo Mohamed and the Ugandan pair of Ahmed Bulanga and Mohamed Bayerno.

Meanwhile, APR Fc have good preparations since the start of the year where they beat Rayon Sports in the Heroes Cup final match but lost the title to the latter.

Forward, Iranzi signed from Zesco United of Zambia while Savio Nshuti joined the military side from AS Kigali.

The 16-time league title winners did not go past the preliminary round of the Champions League last year, crashing out of the competition at the hands of Zambia’s seven-time league champions Zanaco FC.

The return legs for our two African qualifiers have been scheduled for February 21 and 22 in midweek.

Fines for Driving While on Phone Hiked 10 Folds