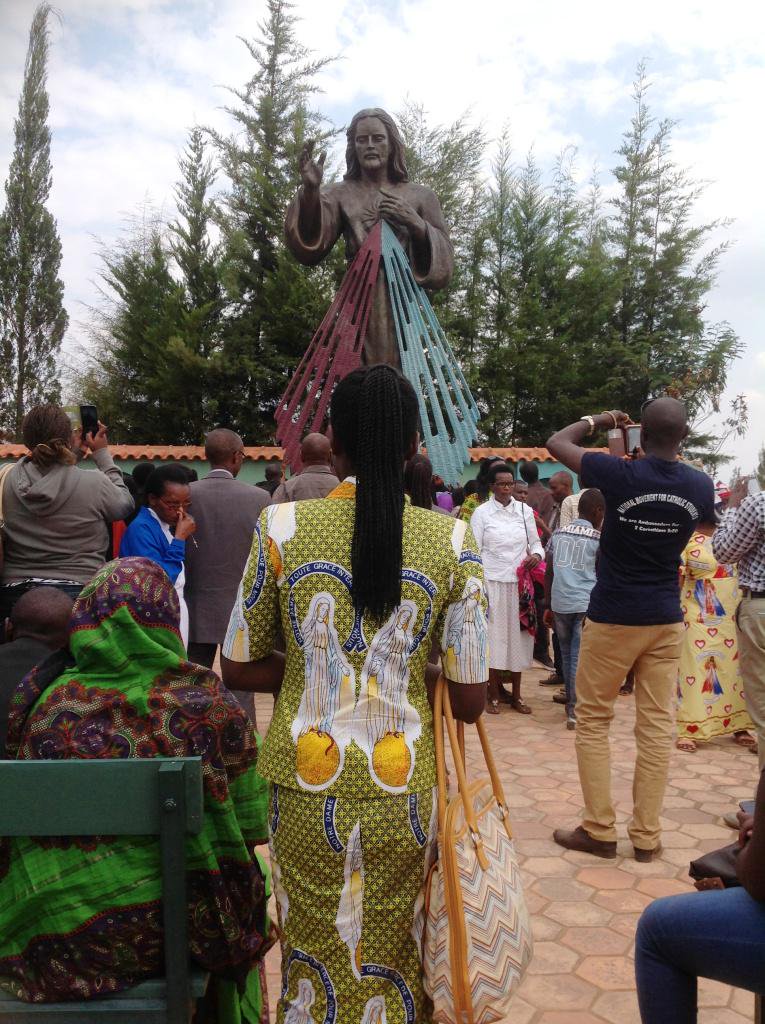 Christians gather in front of Statue of Jesus at Kibeho. The catholic church announced plan to detect fake images and other items used by the Christians

The Roman Catholic Church in Rwanda has announced it will start regulating the market of statues and other items used by Christians in fellowship with God the Catholic way.

Church leaders said they are compelled to come in, because sellers are abusing the market.

“We are putting up a screening committee that will examine standards of all the items on sale,” Monsignor Celestin Hakizimana, Bishop of Gikongoro Diocese told KT Radio’s Marie Claire Joyeuse last week.

Bishop Hakizimana said there are strange statues of Jesus or her mother. For example, he said “there are statues which portray Jesus like an Indian.”

At the celebration of Apparition of Virgin Mary Mother of Jesus in Kibeho, Hakizimana further warned that “these items will have a mark of Kibeho such that any Christian would know the genuine items, otherwise, we shall not raise our hand to bless something that does not have Kibeho mark.”

Kibeho, a village of Nyaruguru district, southern province, has become an important venue for the Catholic pilgrimages.

Pope John Paul II declared Kibeho as a ‘holy land’ in 2001 after three young ladies had said that Virgin Mary appeared to them.

Hundreds of thousands of pilgrims flock to Rwanda every year to get “a special blessing” from Kibeho. More than 500,000 pilgrims visit the place every year.

Sellers lay down the items in thousands to sell to this crowd. They said, regulation of the market is good, provided that they build them a shopping mall so that they are able “to keep the Holly items to a safer place.”

Christians from the Catholic Church who spoke to KT Press, said that however much they don’t know the origin of these images of Jesus and her mother among others, there are conventional items.

“If someone brings an image of Jesus different from what we have been seeing, he is being unfair to us,” one believer said.

Meanwhile, the church has now decided to put in place a tour guide from the Kibeho clerics who will work together with tour guides from Rwanda Development Board (RDB). The service will be free.

To have all information from Kibeho reach the world, Radio Maria, the International Radio of the Catholic Church launched its Kibeho studio on November 28, 2018.

In Morocco, Rwanda Insists Migrants Are NOT Criminals