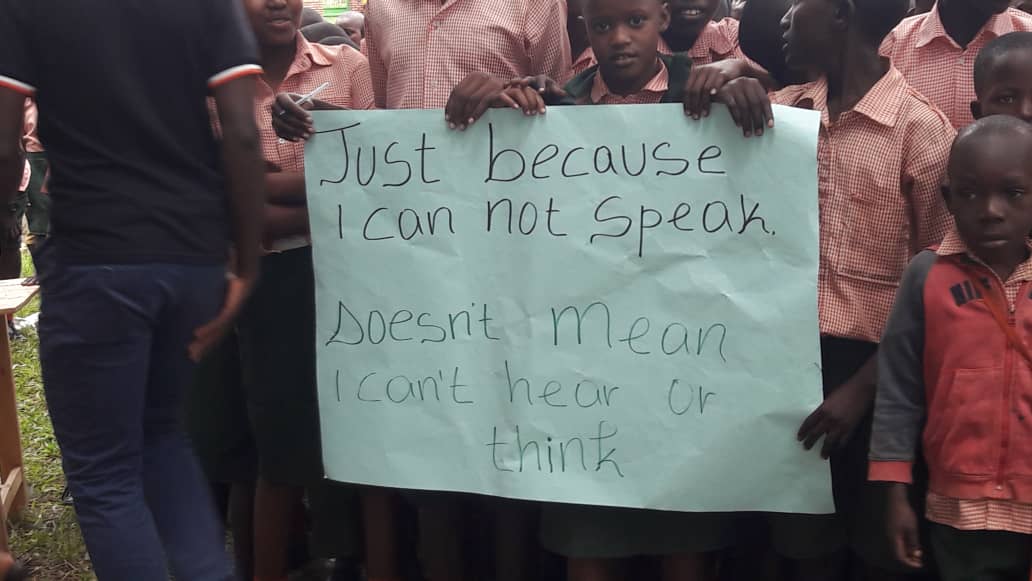 A minute-long bell rang at a breath-taking hill in Rusiga sector of Rulindo district in Northern Rwanda.

The hill is home to Groupe Scolaire Rukinga – an inclusive primary and secondary school.

“Welcome to G.S Rukinga – an inclusive school” is a rare gesture to regular visitors of so many schools in Rwanda. But at Rukinga School, the word “inclusive” matters.

All school-going children are welcome – irrespective of their background, religion, family roots or nationalities as is the case in all Rwandan schools.

But above all, Rukinga has a special attention; they never consider children’s physical and mental health to be able to enroll at the school.

The “Ring the bell” campaign was brought to this school on Wednesday, March 13, by the National Union of Disability Organizations in Rwanda (NUDOR).

The campaign aims at raising awareness across the communities to consider that persons with disabilities have the right to education as output of the activity. 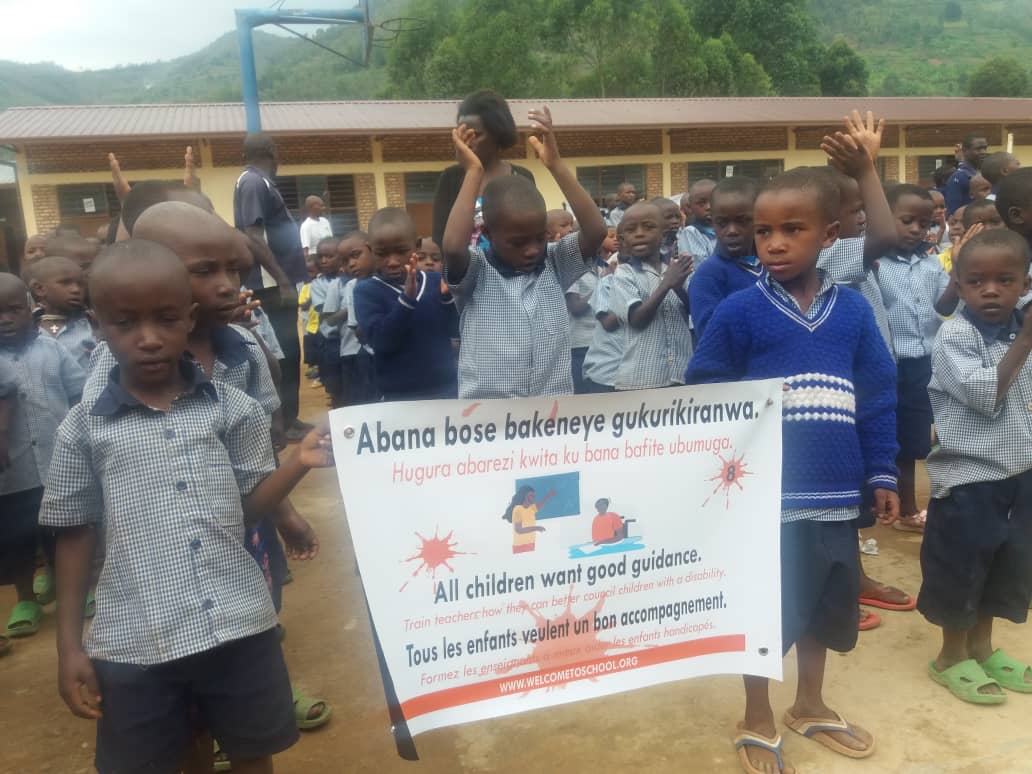 At Rukinga school, a first time visitor get struck into emotions to find loud noise in one section of the school while the rest is silent – despite being break time.

But a jovial mood exhibited on the faces of every child tells it all. Communication is another element that shocks you.

You cannot easily identify the difference between disabled and non-disabled kids. Sign language has become the norm at the school – especially when children interact.

In one of the classes, KT Press landed on Etienne Munyakazi – a sign language teacher. In an extremely quiet but seemingly joyful class, students demonstrate how, irrespective of their disabilities, they can compete with others in sign languages.

The class was amazing, as children demonstrated writing skills on a chalkboard while following teacher Munyakazi’s sign language skills.

“A language cannot be taught using another language. That’s why you never saw me opening my mouth,” Munyakazi told KT Press. 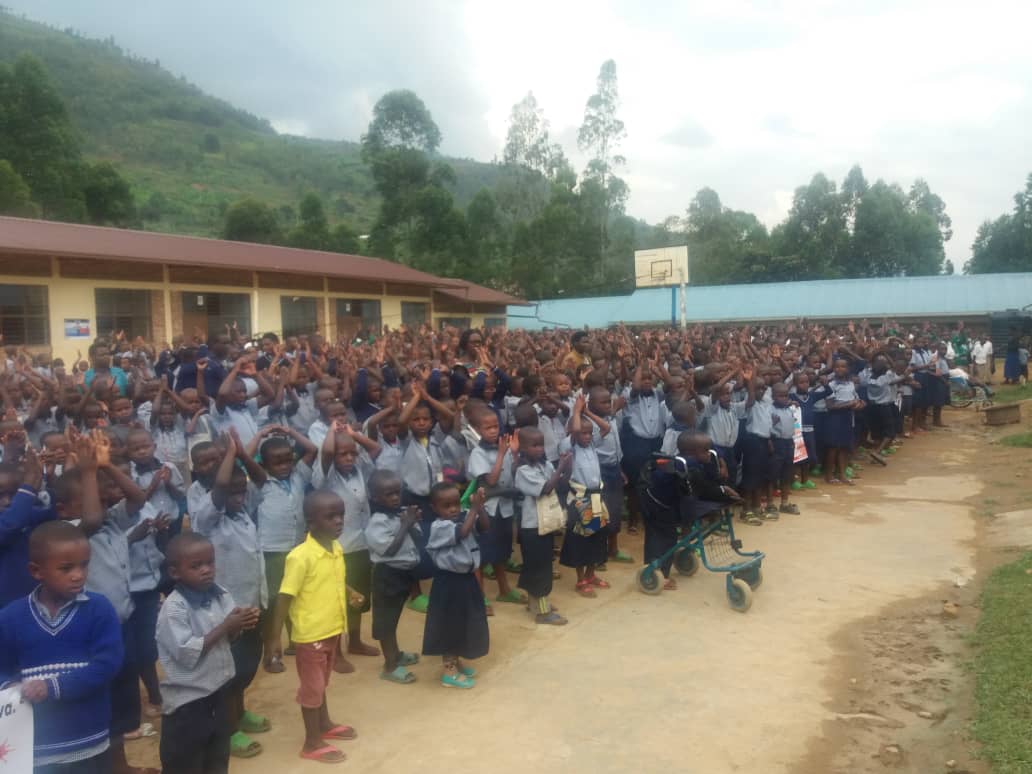 Outside Munyakazi’s classroom, paved pathway for disabled children can be seen all over.

But why can’t other schools follow this example? “There is a big issue of mentality. The cost is not that different. We are here to ring the bell and alert the public so that they know children with disabilities also need access to education,” he said.

According to Rukundo, research has discovered that across the world, 9 out of 10 disabled children worldwide can’t be able to enroll in school” says Aimable Rukundo – head of Community Based Rehabilitation (CBR) at NUDOR told KT Press.

Many Children with disabilities not in school

The 2014 school census conducted shows that only a total of 24,862 children with disabilities were in preschool, primary and lower secondary schools across all categories. 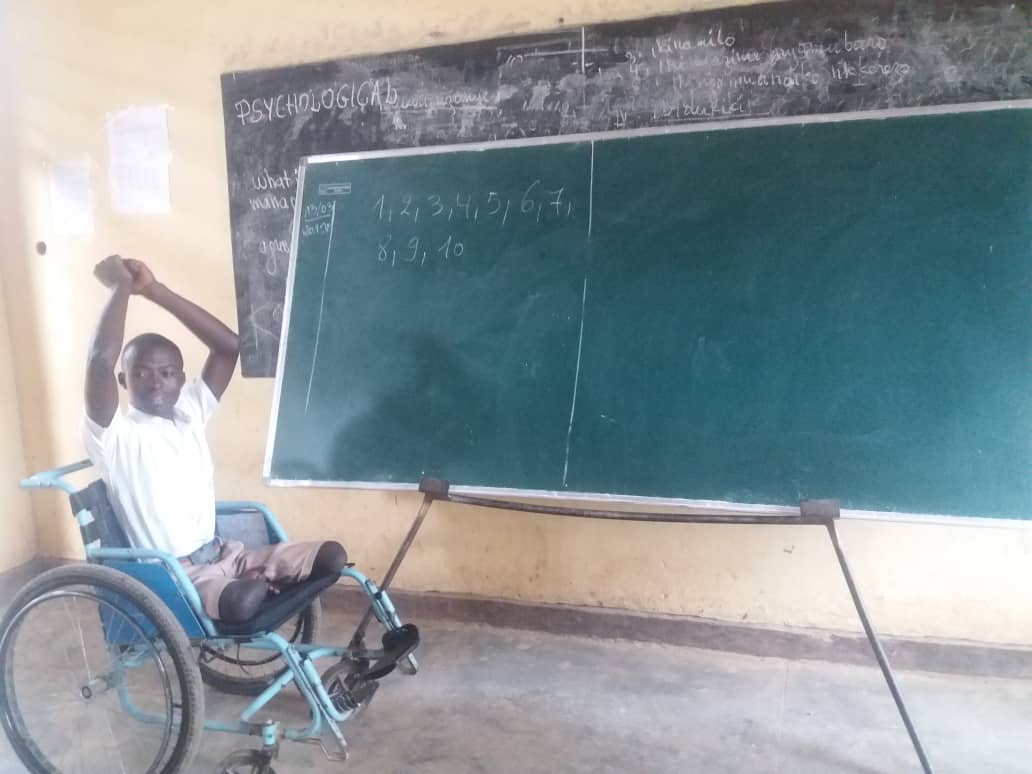 Globally, around 150 million children live with a disability; in low- and lower-middle-income countries while 40 per cent of them are out of school at primary level, with a possibility of rising to 55% at lower secondary level.

While this is happening, data on this issue remains poor. Aimable Rukundo – head of Community Based Rehabilitation (CBR) at NUDOR says; “We depend on data from the national institute of statistics of  Rwanda and their recent survey never included children aged and below 5 years.”

A recent research by the Global Partnership for Education (GPE), found that less than 5 per cent of children with disabilities in 51 countries in Sub-Saharan Africa and South Asia are enrolled in primary school.

In Rwanda, according to UNICEF’s 2014 survey, there were 92 inclusive schools with a number of districts not even having any – pushing demand to surpass supply in special schools.

Maurice Uwifashije, a bachelor’s degree holder in sign language teaching at Groupe Scolaire Rukinga sees lack of access to education by Children with disabilities as a result of two key issues; cultural beliefs and lack of specialists in the sector.

“For instance, I am the only graduate with a bachelor’s degree here (GS Rukinga). Other two teachers are diploma holders. We are still very few,” he said.

According to Uwifashije who graduated last year from the only government-owned School of Inclusive and Special Needs Education, “You can’t even find a master’s holder in our field. We still have a long way to go. If we were enough, we would even help mobilise parents to bring their Children with disabilities to school.”

Rwanda has made a significant commitment to the right to education for children with disabilities, including ratifying the UN Convention on the Rights of Persons with Disabilities (CRPD) in 2008 and establishing the National Council for People with Disabilities (NCPD) to act as an advocacy body and coordinate activities and monitor progress towards this commitment.

However, “There is still a long way to go. People especially parents and school authorities need to get rid of discriminating Children with disabilities,” Aimable Rukundo told KT Press.