Cimerwa – Rwanda’s Cement manufacturing factory with over 30 years of monopoly, could lose to a new rival before end of this year.

The plant, with annual production capacity of 600,000 tonnes, will release its first bag of cement on the local market in December this year.

“The first phase of their production is expected before end of this year with most of raw materials provided within our district,” Augustin Ndabereye – Musanze district deputy mayor in charge of economic affairs told KT Press on Wednesday.

Located in Kimonyi sector – about 4 kilometers from Musanze town, the plant will be equipped with state-of-the-art laboratory to provide good quality products with production of multiple cement types, according to officials.

On May 24, State Minister for Transport in the Ministry of Infrastructure, Eng. Jean de Dieu Uwihanganye and Northern Province Governor Jean Marie Vianney Gatabazi were seen inspecting construction of a road that will provide easy access to the plant located in the district’s industrial park. 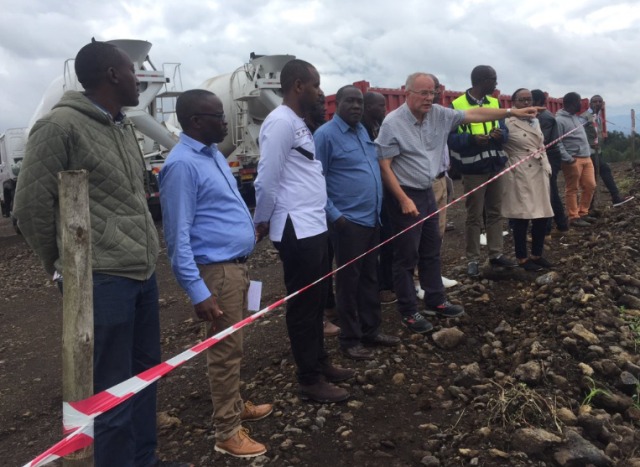 Cimerwa has struggled to feed the growing local market, despite a booming construction industry.

Between March and June last year, Rwanda was hit by biting cement crisis – causing severe shortages of cement that pushed retail price per 50 kg bag to over Rwf13,000 ($14.28) up from Rwf8,500.

The crisis came after the Company, in which South Africa-based PPC Ltd. owns a 51 per cent stake, had invested $170m to upgrade it and increase the capacity from 100,000 metric tons to 600,000 tonnes.

The remaining shares are co-owned by government and a consortium of local investors including Rwanda Social Security Board (RSSB) and Rwanda Investment Group.

In March this year, President Kagame, while addressing leaders at a retreat, directed that government pull off its shares in Cimerwa to avoid ‘absorbing losses’.

The President said he was wondering what government benefits from a company supplying not even a quarter of what is needed in Rwanda.

By pulling off its stake in Cimerwa, Kagame said the biggest shareholder will either do better, make profit or decide to close shop.