Home NewsNational Bring Me the Head of Sinzi
National

Bring Me the Head of Sinzi 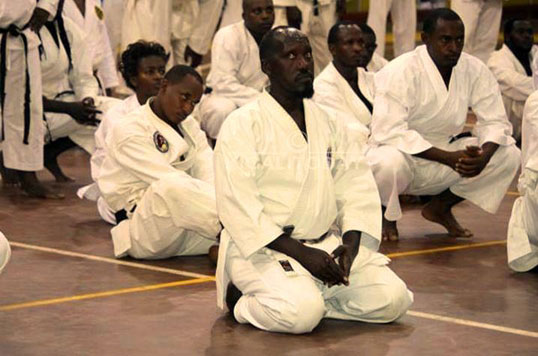 “The journey we travelled is impossible to describe…impossible to understand, people were blown up in the air, and on the ground you would see their legs, their arms…it is impossible to say…” One might be forgiven for imagining these the words of World War11 octogenarian, and nonagenarian veterans describing the Normandy landings, whose 75th anniversary has just been commemorated in Europe. But they come from Clementine Kayitesi, nine years old during the 1994 genocide against Batutsi, trying to describe as best she can, the horror she witnessed.

Kayitesi was one of over a hundred survivors led to safety by Tharcis Sinzi. A quietly spoken fifty-five year old, Sinzi was thirty in 1994, when like so many, his world as he had known it became a hell on earth. He would emerge to be an outstanding example of the many extraordinary individuals, who took a heroic stand against impossible odds.

As the killings started, like many others, Sinzi gathered up his young family, wife and daughter, and headed to his village, from the city of what was then Butare, today’s Huye, in the hope that they would be safer there.

His eighty-two year old father who had lived through the earlier genocides, 1959, 60s, 70s, and now 1994, sat him down, and for over two hours, clearly outlined to his son the horror that was to come. In great detail he explained how he and his neighbours had fought off the killers in those earlier genocides, and encouraged Sinzi to do the same.

Sinzi had earned himself quite a reputation as a Karate enthusiast and instructor, now his father suggested he draw from that renown to bring people together, and put up a stand against the killers. “He explained how they had fought in 1959, 60s and 70s, and said Sinzi, you are known as a strong man, you must get the people together and do the same”

Sinzi mobilised about two hundred of his neighbours, and for a week that must have seemed a year, they successfully fought off the notorious Interahamwe, the government youth militia which spearheaded most of the tortures and killings, in all Rwanda’s genocides against Batutsi, including the 1994 genocide, which was intended to wipe out every last Mututsi man, woman, and child.

Interestingly, at the beginning, what we can call Sinzi’s army was made up of not only Batutsi, but, Bahutu, and Batwa, all together in resistance against the Interahamwe militias. Later on the Bahutu would slowly desert the fight.

As always happened when faced with any resistance, the Interahamwe militias called in reinforcements from the national army.

“They now begun to shoot at us” recalled Sinzi, “for most of those with me, it was the first time they had heard gun fire, and they all fled, leaving me alone”. Armed with a cutlass and a club, Sinzi was able to walk through the ranks of Interahamwe, searching for his wife and child, passing many road blocks unhindered.

He was in part protected by his reputation as a Karate fighter, and by the fact that the Interahamwe would flee from any challenge, preferring to slaughter the defenceless. “They would not have got past us, if it had not been for the help they got from the army”, Sinzi recalls.

He deliberately chose not to run. “I wanted to conserve my energy, so that if they attacked me, I would at least take some of them with me”.

He eventually ended up at a government cattle farm, where people were fleeing. Many more would seek him there, hoping for some kind of leadership they hoped might afford them a chance of survival. Before long there were over 3,000 terrified men, women, and children, with all their belongings, including their own livestock.

Sinzi once again organised the people to fight back against the attack from the Interahamwe, using anything they had for weapons. He moved everyone to a vantage point from where they would observe any approaching attackers. Women and children were designated to bring stones to the fighters. He had devised a desperate plan with the stones, “if fifty of us had stones, and the attacker had a gun, he would kill some of us, but, the rest of us would kill him, when he ran out of bullets”.

The inevitable attack duly came. The defenders put up such a strong fight that the national radio, the infamous hate radio RTLM (Radio Television de Mille Collines) claimed that the Inkotanyi (Rwanda Patriot Front, or RPF fighters) had advanced to the farm, and called for support from the army.

Sinzi received intelligence from Batutsi women who were married to Bahutu men, that a military attack had been planned. He was a particular target, the Interahamwe were demanding his heart and head, to show that he had been truly defeated. His intelligence was soon proved accurate. Reconnaissance planes and helicopters circled their position. Soldiers camouflaged themselves as refugees, carrying guns in mattresses, in the manner of the refugees, to get within firing distance, and there set up gun placements surrounding the refugees.

Sinzi now called a meeting, and told the people that they should all cross the Akanyaru river to Burundi, additing that they would not be able to withstand the coming attack. His plan was to move at night, putting cattle in front of the refugees as a shield for any attack.

“There were many educated people there, doctors, Pastors, teachers…instead of supporting me, they argued against the plan, saying that the government could not just kill so many people…some believed that prayer would save them, and they refused to go”

His plan rejected, he set about trying to defend their position the best he could, knowing their position would be hopeless, against a full military assault. The attack when it came, was ferocious. The refugees were bombarded with mortar shells first, followed by bullets and machete blows. In disarray, they now tried to flee across the river to Burundi. But, unlike when Sinzi had first suggested that plan, the army and Interahamwe were now prepared for this route of escape.

They channelled the refugees into a corridor, and attacked from all sides, shooting, hacking at them with machetes as they fled.

Even now, Sinzi moved about, trying to encourage them, comforting the children. Clementine Kayitesi remembers him telling them to take heart, that they might just live through it all.

He fashioned ropes out of clothes to help many who could not swim to cross the river. Of the 3,400 people, he managed to get only 118 to Burundi and safety.

He never managed to save his own family. He would later find and bury his wife’s body, but would never find that of his child.

After fighting for his life, and surviving the earlier genocides, at eighty-two, his father was finally cornered and murdered.

The survivors of that fateful journey described by Clementine Kayitesi speak Sinzi’s name with deep emotion and profound gratitude. The man himself remains somewhat haunted by how many more would have survived, had they acceded to his flight plan.

You can hear Sinzi’s story, in his own words, on Rwanda Beyond The Headlines, Sunday 8pm, KTRadio, 96.7fm, or on podcast, Ktradio.rw.