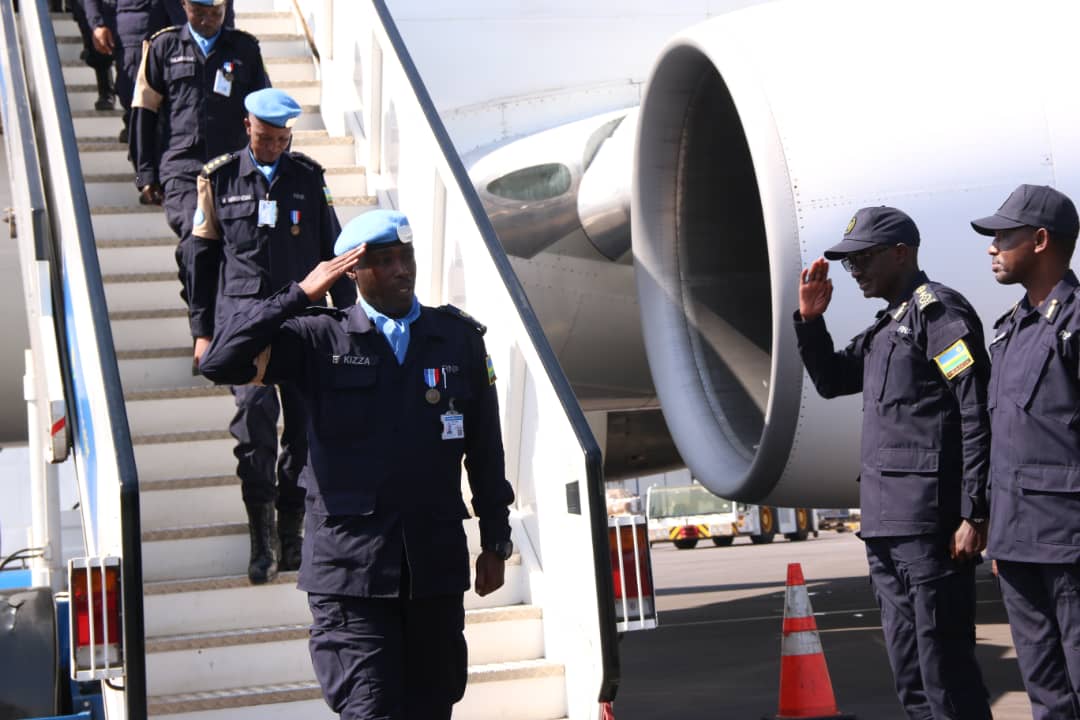 The officers had returned home – after a year long deployment in Haiti for peacekeeping mission.

Upon disembarking the plane, the officers, led by their Deputy Commander, SSP Edward Kizza, received a welcome salute from the Police Spokesperson CP John Bosco Kabera and other senior Police officers.

Their end of mission today marks the country’s 9th and final rotational exercise since 2011, when the maiden FPU contingent was deployed in the Caribbean nation to respond and provide humanitarian assistance and security – following the catastrophic earthquake that killed over 300, 000 people and displaced over three million others, according to documented figures. 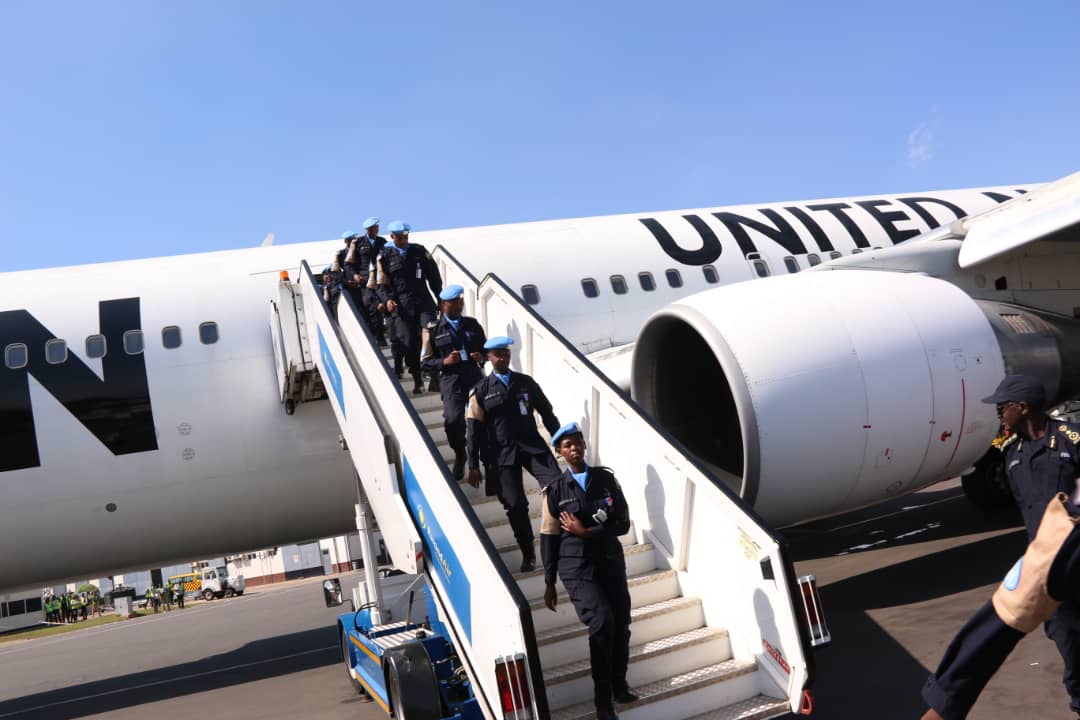 The contingent, codenamed ‘RWAFPU9’, had replaced the same number under RWAFPU8 which completed its peacekeeping mission last year.

For the entire period Rwanda Police has spent in the Caribbean nation, it has emerged, that their heroics remains in the hearts of Haitians who, amid a disastrous life caused by the Earthquake, lived to testify that, atleast, life was possible together with Rwanda Police Peacekeepers.

Many had lost hope. Others never dreamed to see another day – just after helplessly watching their loved ones breathe their last under the rubble – brought down by the deadly magnitude of 7.0 tremor that hit the Island nation. 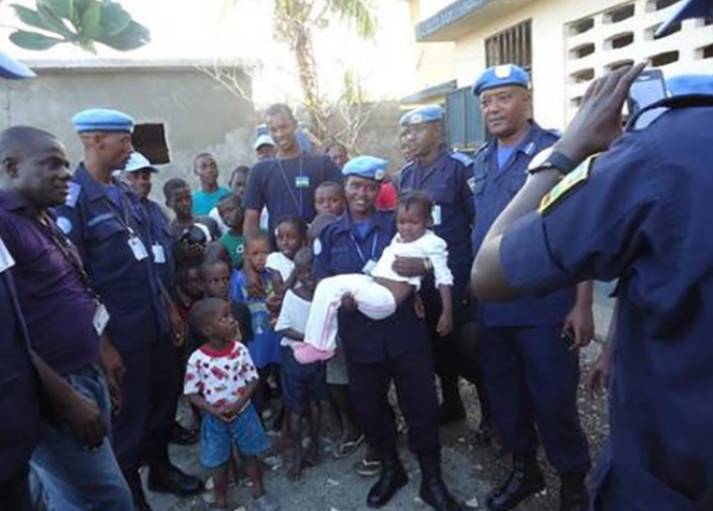 At exactly 4:53 PM in 2010, the earthquake hit southwest of the Haitian capital of Port-au-Prince.

According to media reports at the time, the initial shock registered a magnitude of 7.0 and was soon followed by two aftershocks of magnitudes 5.9 and 5.5.

Haiti had not been hit by an earthquake of such enormity since the 18th century, the closest in force being a 1984 shock of magnitude 6.9.

The country was literally torn apart – prompting the World to ring alarm bells for help, including the United Nations.

The wave of the call to help Haitians reached every corner of the world including in the music circles.

Even a remake of the famous 1985 hit song “We Are the World”, which was written by American musicians Michael Jackson (RIP) and Lionel Richie, was reproduced as the “We Are the World 25 for Haiti”.

The song was recorded as part of a charity by the supergroup Artists for Haiti. 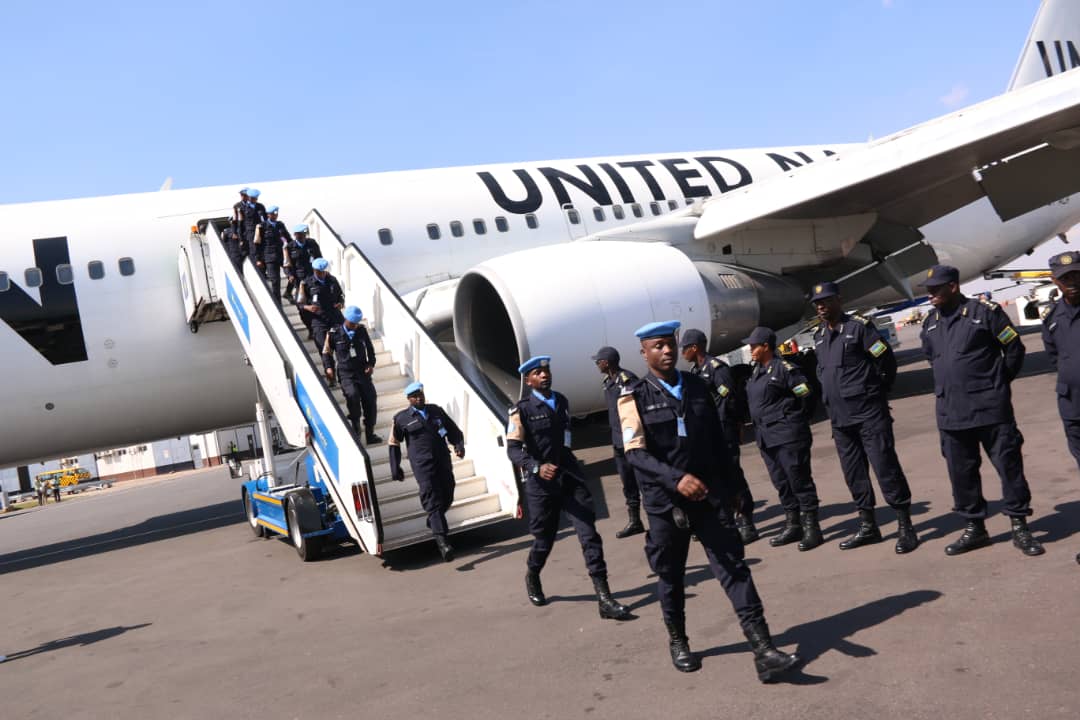 Initially, in late 2009, it had been suggested to Richie and Quincy Jones – produce of the original “We Are the World” – that a re-cut version of the song be re-released under the title “Live 25”.

But following the deadly earthquake in Haiti, it was agreed that the song would be re-recorded by new artists, in the hope that it would reach a new generation and help benefit the people of Haiti.

The song, which was recorded in fourteen and a half hours by over eighty artists on February 1, 2010, was commercially successful worldwide – generating funds to help rebuild the torn-apart-Haiti.

But that was one part of the project. Haitians needed more than money. They also needed security and other humanitarian assistance.

Bringing smiles back on the faces of Haitians

For the period of nine years, Rwandan forces, among other forces on a mission in Haiti had appeared in the media trying to bring back smiles on the faces of Haitians.

Some were seen sharing bread and biscuits with Children on streets of their operation areas.

Others, according to portrays shared by Rwanda Police, were seen several times helping Haitians to rebuild their country.

A case was in October 2017, when Rwandan Police peacekeepers under Formed Police Unit Eight (RWAFPU VIII) of 140 officers, were joined by residents of Zone Two in Jeremie commune of the Grande Anse region, to rehabilitate a road covering a distance of about 1.5km, which had been destroyed by rain and paralyzed the traffic flow and the business in general.

The activity was done as part of a home grown solution known back in Rwanda, as ‘Umuganda’ or monthly community work which brings together Rwandans every last Saturday of the month, to clean neighbourhoods, build infrastructure and later on discuss with leaders several development projects.

Several top leaders including UN officials have decorated Rwandan Police peacekeepers for their exemplary gesture in peacekeeping operations in the Island nation that is still recuperating from the aftermath of the tremor.

“Our relationaship with Haitians was cordial. We have helped them maintain security,” he told journalists. 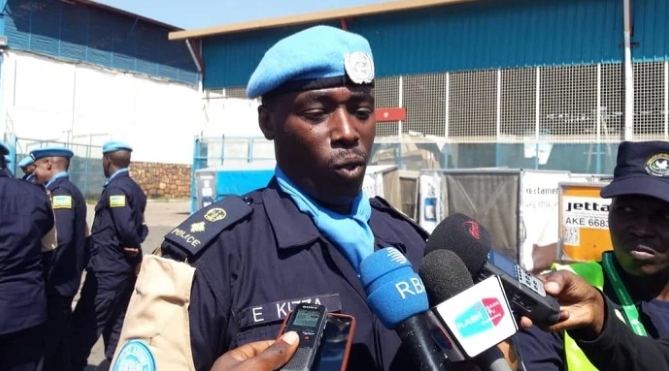 Meanwhile, welcoming them back home on behalf of Rwanda National Police leadership, Police Spokesperson, CP John Bosco Kabera, commended the peacekeepers for the discipline and courage demonstrated throughout their one year  tour of duty. 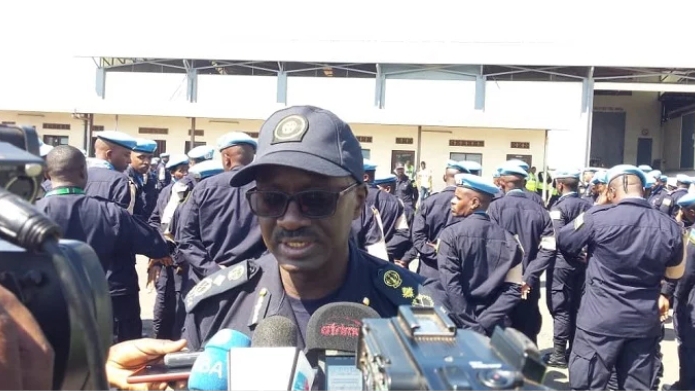 In April 2017, the UN Security Council, extended the UN mandate in Haiti under a new entity—UN Mission for Justice Support in Haiti (MINUJUSTH).

Under the new mandate, the new UN body was mainly to supports the Government of Haiti in strengthening rule-of-law institutions, further develop and support the Haitian National Police and engage in human rights monitoring, reporting and analysis, among others.