Home Voices Stepp’d in Blood, A Book Review: If an Akazu Member Killed You, or Took Your Wife by Force…
Voices

Stepp’d in Blood, A Book Review: If an Akazu Member Killed You, or Took Your Wife by Force… 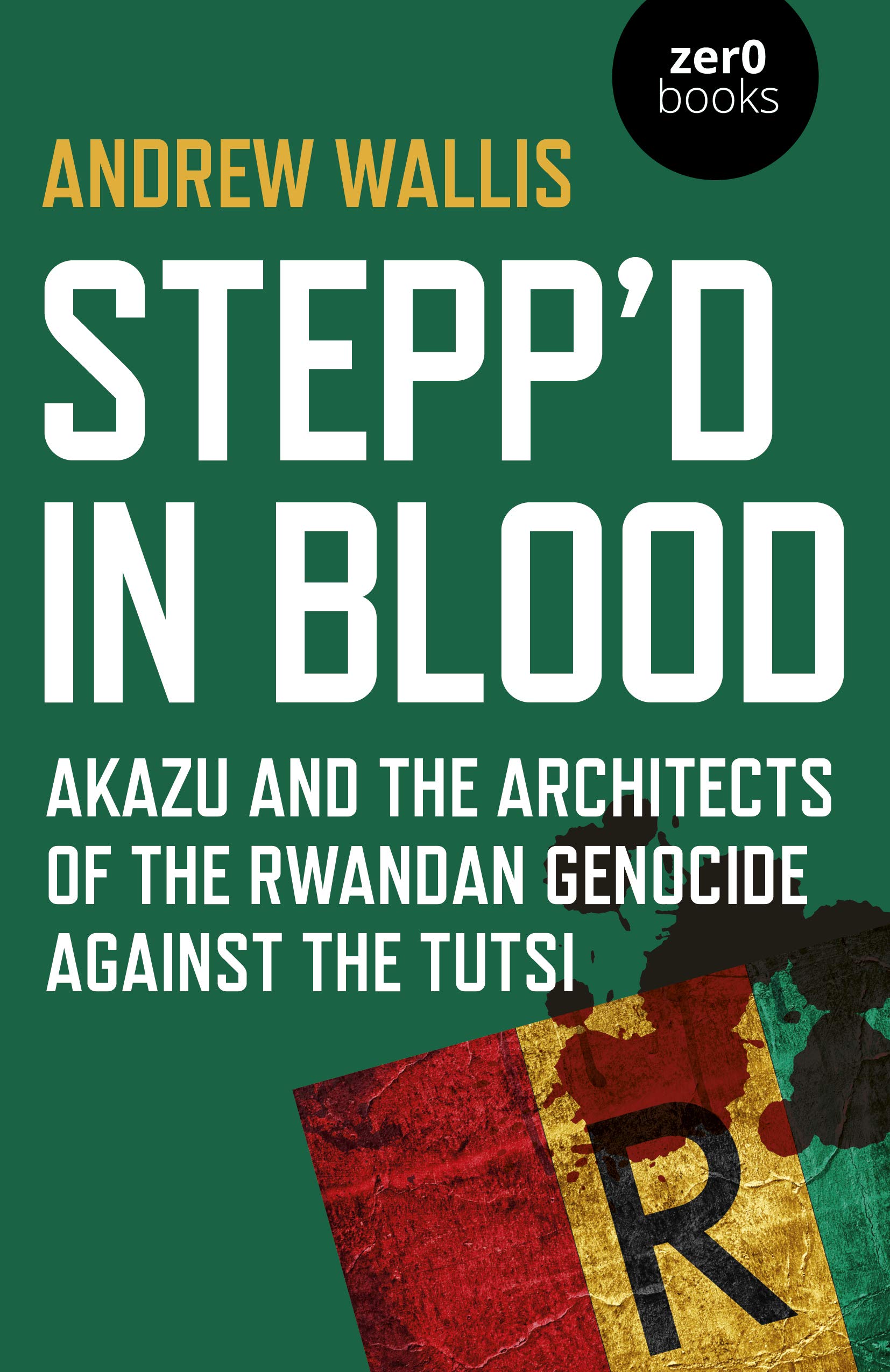 What would a woman do if a big government official braked his vehicle beside her as she walked, and he told her to get into the car, drove off, then forced her to sleep with him? And what would the cuckolded husband think?

That kind of thing was common in the days of the Habyarimana regime, as indicated in the following snippet about the conduct of one of the regime fat cats, Protais Zigiranyirazo as described by British journalist Andrew Wallis in his book, Stepp’d in Blood. “An imposing figure, always stylishly dressed in a hand-made suit and tie, even in informal situations, Zigiranyirazo (Mr. Z) was not a man to be treated lightly.

“Like (Theoneste) Lizinde, and indeed Habyarimana himself, taking another man’s wife who caught his fancy was a statement of his power and status. Husbands were given work assignments away from the area, and tended to co-operate rather than face the consequences of trying to face down authority. Zigiranyirazo would sometimes stop his car when he saw a pretty lady, married or single, to talk to her or to invite her on board!”

It actually was much worse than Wallis describes. People who lived through those times talk of incidents such as when a military heavy; someone like Laurent Serubuga the regime’s deputy army chief of staff, would enter a man’s home. The feared man would be welcomed, then after a few minutes of small talk he would get up, with the man’s wife, to go with her into their bedroom, leaving the poor fellow in the sitting room.

This mix of arrogance, contempt for people, and power-drunkenness in the powerful is unimaginable in the Rwanda of today; really more of an impossibility that one can only think of in hypothetical terms.

But in the 21 years of the Habyarimana regime – the subject of Stepp’d in Blood (subtitled Akazu and the Architects of the Rwandan Genocide Against the Tutsi) – those were the daily realities of life for every Munyarwanda. Everyone, that is, save for the perpetrators of such daily humiliations – and other offences far bigger and worse – against the populace. That was the rule of the tiny cabal that hailed from Ruhengeri and Gisenyi who ran the country like a Mafia fiefdom.

It was the “Akazu”, whose criminality Andrew Wallis has documented and brought to light far more than any other author or historian before him.

The British journalist has dug into the highly corrupt, power-abusing ways of the family of Habyarimana and of his wife Agathe Kanziga who was the real power in the land. As everyone with some knowledge of Rwandan knows Kanziga – with her coterie of all-powerful close confidantes a group portrait of whom would be a who-is-who of the perpetrators of the Genocide Against the Tutsi – called the shots. There was Theoneste Bagosora, a close neighbor from her home village in the former Giciye Commune of the Bushiru region. There were her brothers Elie Sagatwa and Protais Zigiranyirazo, and her cousin Pierre-Celestin Rwagafilita, another sinister power broker.

This was the core along which a host of close retainers, Serubuga, Theoneste Lizinde, Aloys Nsekarije, businessmen Kabuga Felicien and Joseph Nzirorera to name only the most notorious of them, rotated.

The strength of Stepp’d in Blood is that it serves no agenda other than presenting all the events, facts and actions leading to the 94 Genocide against the Tutsi, and a while afterwards. Wallis clearly did not set out to write a pro-RPF book. Neither was he trying to impose a contrarian version of events – such as those that strain to implicate the current Rwandan leadership into some crime with revisionist accounts of historical facts; and that seek to deny or trivialize that horrific crime.

Wallis just sets out the facts, and let’s the reader draw their own (in this case horrified) conclusions. And the facts he narrates aren’t things he learnt second hand, or while sitting down. The man has done his research, reflected in a list of endnotes thick as a book themselves. He’s interviewed multitudes of victims, and eyewitnesses to the regime – going back to elderly former officials of Rwanda when it still was a Belgian colony. Wallis has extensively combed through the records of court cases of the International Criminal Tribunals. He’s been to France poring through Mitterrand-era records, and researching that government and its officials dealings with the genocidal regime.

The result is this breathtaking work whose central conclusion is that the Akazu itself, at the direction of Agathe Habyarimana, was responsible for conceiving, planning and instigating the genocide. That is nothing new to anyone familiar with Rwanda’s past. Well, unless one is a determined genocide denier. What’s new is the level of detail the author brings to the narrative, something that will leave no reader with a doubt about the culpability of the Akazu mafia in one of the Twentieth Century’s signature atrocities.

Habyarimana obviously was as culpable as anyone. He was the individual around whom all the plotting centered. But “le clan Madam”, the clan of Madam, had long usurped his powers. And ultimately when the clan – Kanziga herself, Bagosora, Zigiranyirazo, Elie Sagatwa, Rwagafilita and other members of this core – decided it, Habyarimana ultimately was expendable. Which is what happened when they needed a pretext to implement the bloodbath they had prepared.

They were ready to go that route rather than countenance sharing a country with its Tutsi citizens, or anyone that wasn’t from Bushiru.

To these people it was inconceivable that the Rwandese Patriotic Army seemed to be winning the war. By then Habyarimana’s was long estranged to his wife, with some of their violent quarrels memorably detailed in Stepp’d in Blood. For those aware of the ambition of Kanziga, there only was going to be one outcome to a contest between her and ikinani.

To this woman, the thought that even a smidgen of hers, and her clan’s power could be lost – worst of all to the “Tutsi cockroaches!” – was unthinkable. They had controlled a state for decades. They had power of life and death over people, a powerful addiction in itself. They were very wealthy after decades of siphoning millions of dollars and other forms of foreign aid, to personal use. They were quite ready to massacre an entire ethnicity if that was what it took to maintain the status quo.

The scenes in Habyarimana’s living room the morning following the downing of Habyarimana’s aircraft are beyond chilling, and speak far more clearly of who killed the man than anything else. The journalist describes the personalities that immediately converged on Habyarimana’s house, to sit in the lounge area “that had become a temporary morgue where the bodies from the plane were slowly recovered and brought”.

Present were Habyarimana’s two sisters, Godelieve and Telesphore; his brother Doctor Seraphin; as was Archbishop Vincent Nsengiyunva. There were the families of Tharcise Renzaho, and army chief Deogratias Nsabimana. There were two of Habyarimana’s children, Jean-Luc and Jeanne. Also present was Mr. Z, Bagosora’s brother Pasteur Musabe, and a few other powerful individuals.

Agathe Habyarimana, hard eyed, told relatives who stood over the bodies not to cry, “because that would assist the enemy”! Along with Zigiranyirazo, she was busy working the phones, making repeated calls to Mitterrand, Mobutu, and the French ambassador, at times asking to speak to them in private. Suzanne Seminega, a life-long friend of Mrs. Habyarimana’s is described in the book as being shocked that instead of finding a woman in mourning, she saw Agathe dictating a list of names on the telephone. “Agathe named political opponents, among whom Prime Minister Agathe Uwiringiyimana, who would be killed a few hours later.”

The killing spree went as planned. However the end was anything but. The RPA prevailed, inflicting military defeat after defeat upon the Mitterrand-backed regime, until the liberating force put a stop to the crimes against humanity.

Aided and abetted by a handful of Western governments, most notable Francois Mitterrand’s administration, this is one moral horror the French establishment from that time has fought tooth and nail, either to sweep under the carpet; to deny or trivialize; or to turn on its head by turning the victims into perpetrators.

Stepp’d in Blood is a well-researched indictment of their role as enablers of the Akazu, and a capable repudiation of their efforts to obfuscate.

Most importantly however, Stepp’d in Blood is an essential read for any Rwandan, either to educate, or remind themselves just what life was like in this country up to 1994.

Rwanda:Tantalum Plant Launches Next Month, Lithium Drilling for Next Year