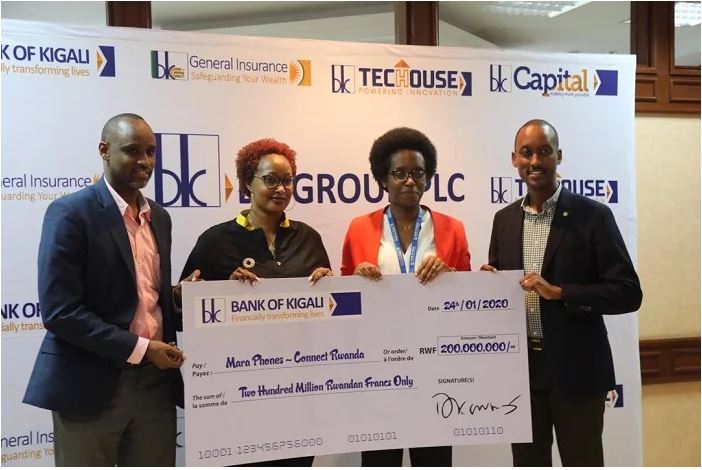 Bank of Kigali Officials handing over the dummy cheque to Mara Phones – Thursday-January 24,2030

Bank of Kigali of parent company BK Group PLC on Friday honoured the 2,000 smartphone pledge to the Connect Rwanda initiative with a Rw200 million cheque which will go towards purchasing Mara Phone smartphones to be given to the unconnected Rwandan households.

The drive which is aimed at connecting at least 2.88 million Rwandan households without a smartphone was kick-started last year by telecom company MTN Rwanda in partnership with the Ministry of ICT and Innovation with President Paul Kagame adding impetus to it.

BK became the leading contributor to the campaign by handing over the Rwf200m cheque to local phone manufacturer Mara Phones which will deliver the handsets.

The CEO of the group Dr. Diane Karusisi said that by giving out the phones, they are facilitating Rwandans to get easy access to services, including banking services, without having to travel long distances.

“We are in the business of transforming people’s lives and we know very well that when a citizen gets a smartphone, they are able to get easy access to services and their lives immediately transform,”

“With the phones they can log into Irembo and get whatever services they want and also use the same phones to do banking and other financial services without moving long distances and losing time,”

“We also think that with the smart phones, they can access knowledge and information on line which they need to transform their lives. That is our small contribution,” Karusisi said.

The companies under the group including Bank of Kigali, BK TechHouse, BK Capital and BK Insurance contributed Rwf150m while the group staff raised Rwf50m towards the challenge.

Dr Karusisi said that in a way, it is an investment for the group because it will directly benefit from the use of smartphone since the citizens will be able to access the bank’s services using the same smartphones.

Innocent Bagamba Muhizi, the Chief Executive Officer, Rwanda Information Society Authority (RISA) said that Connect Rwanda will go a long way in contributing to the digital economy because the smartphones will enable people to access services on line without wasting time in queues.

“This is an important initiative which will enable citizens to access most government services online and other services in their homes, without losing time on long journeys chasing after services. They can spend this valuable time in their gardens and use the phones to access whatever services they want,”

He said the government is committed to put in place the necessary infrastructure to support the initiative, including ensuring access to internet and electricity in all corners of the country for the phones to work efficiently.

He said that once the phones are distributed, the time people spend in local government offices such as sectors and cells will reduce tremendously and the time used can be used to do other things.

The CEO of Mara Phones Eddy Sebera said that the phone manufacturer is not only a beneficiary of the initiative but it is also committed to playing its role in the drive to ensure that unconnected Rwandans have access to smartphones.

“It should be noted that the smartphones being given out are not necessarily Mara Phones. Even other phones are accepted but us as Mara Phones, we are committed to play our part in the campaign by ensuring that our handsets are affordable yet durable for Rwandans in all categories, which is why we reduced the price from Rwf120, 000 to Rwf100, 000,”

“This is why we set out in the first place. We wanted Rwandans to have a smartphone fitting their tastes yet affordable unlike other brands which are expensive for most Rwandans. For us Connect Rwanda confirms exactly why Mara Phone was thought,” Sebera said.

The Chief Marketing Officer (CMO) Richard Acheampong said that the telecom company thought of the campaign in a bid to increase smartphone penetration in Rwanda and luckily it was embraced by everyone.

“Connect Rwanda challenge was initiated with the aim of increasing smartphone penetration in Rwanda. The idea was that one capable person can buy a phone for someone who can’t afford it. We thank Bank of Kigali and others who came forward to support this campaign,”

“Together we are going to ensure that at least every Rwandan household has a smartphone and can directly benefit from it,”

Safi’s Trip To Canada: News Has it He Will Stay There