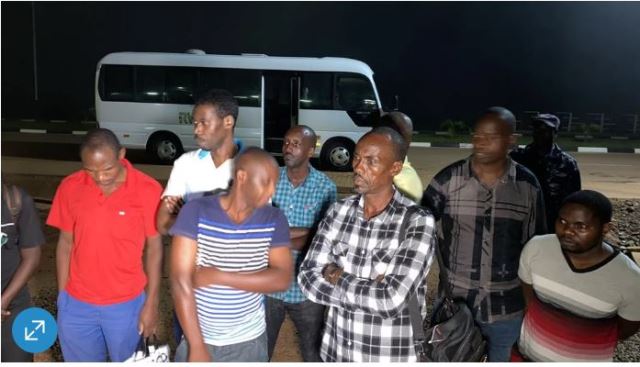 On Thursday morning at around 12:15am, Nine Rwandans who were on Wednesday set free by Uganda arrived back home after a long journey by road from Kampala.

The 9, who include Rene Rutagungira, who was among the first Rwandans to be arrested in Uganda, were officially handed over by Ugandan immigration officials to their counterparts on the Rwandan side, in what has been described as a positive step towards the normalisation of the relations in the two countries.

Appearing emaciated yet jolly and unfazed by the foggy and biting cold at Gatuna One Stop Border Post in Gicumbi district, Northern Rwanda, the first group of Rwandans to be officially released by Uganda expressed relief upon stepping on the Rwandan side.

“We can now rejoice we are home” were the first words uttered by the group as they crossed over to Rwanda.

Having been earlier handed over to Rwanda’s mission in Kampala by the Ugandan Minister of Foreign Affairs Sam Kutesa in line with the implementation of the Luanda Memorandum of Understanding, the 9 were transported to Gatuna where the official handover was conducted.

The released individuals had spent between one to two and a half years in arbitrary detention. They include the 7 who were on Tuesday released by the military court martial in Uganda.

Uganda’s Chieftaincy of Military Intelligence (CMI) has been repeatedly accused of detaining and torturing Rwandans in Uganda in a bid to forcefully extract confessions that they are on spy missions on behalf of Rwanda.

Upon arrival at Gatuna, the released individuals said that they were subjected to torture, mistreatment and deprivation of personal belongings by Ugandan security agencies.

“I was abducted by CMI on August 5, 2017. I was detained in CMI cells for close to 3 months before I was arraigned in court. I was put on the same charge sheet with people I didn’t know. From here we were transferred to Luzira Central Prison where I spent 3 years,” Rutagungira said.

“I then filed a case in the civilian courts challenging my dentition and that is when I was moved to a military barracks where I was locked up until yesterday when I was released,” he said adding that “I am happy to come back home,”

In the military barracks, Rutagungira said they were subjected to torture and poor living conditions, to the extent that he had to file a case over torture in civilian courts.

“It is an open secret. We were tortured,” he said, adding that without the intervention of the Rwandan government, they wouldn’t have been released. He said that he was jailed in a room where he wasn’t seeing light until the last two weeks.

For businessman Mugabo, it was a tale of no light at all, torture and total disconnect from the world. He was arrested in Uganda on January 18, 2018 as he conducted his usual business in the East African country.

“I was arrested on the suspicion of being a spy and taken to a place I didn’t know. It is only today that I have seen the light. I was in a dungeon. People would come in and go. I was shocked to see some of the people today and realised that they were still there,” Mugabo said.

“I am very happy to be back home. I thank God and the Government of Rwanda plus the leadership for ensuring that we are released. I am one of the people who were badly tortured. Between January and April 2019, I couldn’t walk due to torture,” he said, adding that he is not confident that he is fully healthy given the conditions they were in.

The 41-year old, who was arrested when he was 39 said that currently he doesn’t know the status of his family, having left home in December 2017. The father of 5, perhaps 6 now since his wife was pregnant at the time of arrest said that he was cut out completely from the rest of the world.

A resident of Tabagwe sector, Nyagatare district, bordering Uganda, said that after two years, he has to start from scratch, beginning by finding out the whereabouts and status of his family.

Rwanda’s Minister of Foreign Affairs Dr Vincent Biruta on Wednesday said that the release of the 9 is the first step towards the implementation of the agreement which was signed by President Paul Kagame and President Yoweri Kaguta Museveni in Angola in August last year aimed at resolving issues which have affected relations between the two countries.

We believe this is a first step towards the implementation of the Luanda MoU in order to resolve these issues for good. However under the agreement, they are not just 9 people. There are more than 100 people arbitrarily detained in Uganda,”

“We hope the next step is to release all of them and implementing other recommendations,” Minister Biruta said, adding that among other things, Rwanda hopes that Uganda will stop targeting Rwandans who go to Uganda for their personal business and errands.

Appearing withdrawn and seemingly traumatized, the group of 9 will be first accorded medical care and rehabilitation amid reports that they were tortured and mistreated by security agencies for the period they were in jail in Uganda. 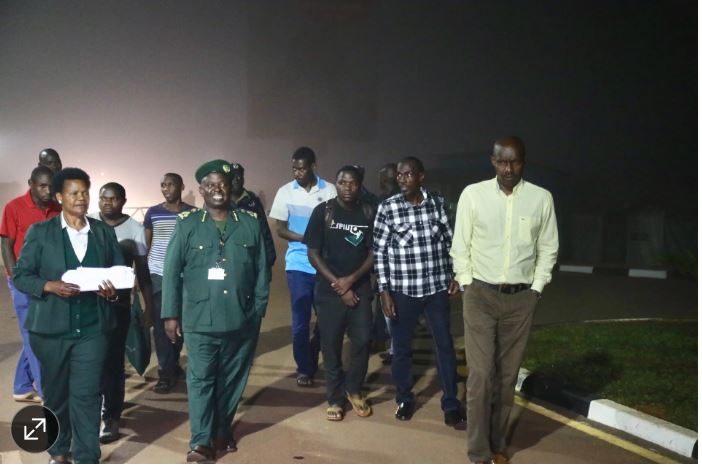 The individuals who were in Uganda while conducting personal or business errands will be reunited with their families.

Elie M. Mandela, said that it was a huge relief for the family, following the release of his father, Rwamucyo, who was abducted in the western Uganda district of Mbarara on May 26, 2018.

“Thank you all for the support and prayers! Dad is coming home. @RwandaGov thank you so much for everything and for truly caring for your citizens,” Mandela, who has actively advocated for the release of his father tweeted on Wednesday.

He was reportedly framed with illegal possession of fire arms but there was no evidence to prove it. Rutayisire, who was arrested with Rwamucyo said that they were picked from a petrol station in Mbarara where they had made a stop to discuss business ideas on their way to Kampala.

“I met Rwamucyo who was known to me on the bus on my way to Kampala, where I used to support Mugabo in his businesses. We decided to stop over in Mbarara since that was his destination to discuss and later I would continue to Kampala,”

“We were at Global Petrol Station chatting over tea. It didn’t take 15 minutes before we were surrounded by security operatives. They told us that we were under arrest but they never told us the reason immediately. We were taken to Makenke Barracks,”

“They put us in a cell and interrogated us, asking us about Rwanda and our mission. They told us that they knew we are soldiers, but we told them that we are simple businessmen just looking for money. They did not believe us. After 9 days, they called CMI and we were transferred to Kampala,” Rutayisire recalls.

They were handcuffed, blindfolded and put in a car to Kampala where they were held at Mbuya CMI premises. After 6 days, they were interrogated again and accused of coming to Uganda to destabilise the security of the country, despite the duo insisting that they only came to Uganda to do business.

For many months, they were tossed between CMI, Makindye Military Barracks and courts while undergoing torture and mistreatment until Tuesday when they were freed by the General Court Martial.

“All they wanted was us to admit to their accusations but we did not,” Rutayisire said, adding that it frustrated them when they refused to admit. He said that they were asked which side they belong to –the one supporting President Kagame or not, but they maintained their position.

Minister Kutesa said that charges against the 9 were withdrawn as an act of goodwill, adding that they hope Rwanda would reciprocate.

The Minister of State for Foreign Affairs in charge of East African Community Amb. Olivier Nduhungirehe however told KT Press that there is nothing to reciprocate since Rwanda has not illegally detained Ugandans.

Kigali also says Kampala should cease all forms of support to armed groups fighting the government of Rwanda, mainly the Rwanda National Congress (RNC) whose members remain active inside Uganda.

Minister Biruta said Uganda if Uganda follows through on its promise and tackle the raised issues, Rwanda will lift the travel advisory and ease border restrictions if it is deemed safe for Rwandans to travel to the East African country.

About 1, 430 Rwandans have been unceremoniously deported from Uganda, dumped across the border and deprived of their properties and money while more than 100 remain incarcerated.

Biruta Speaks out on Uganda, Burundi