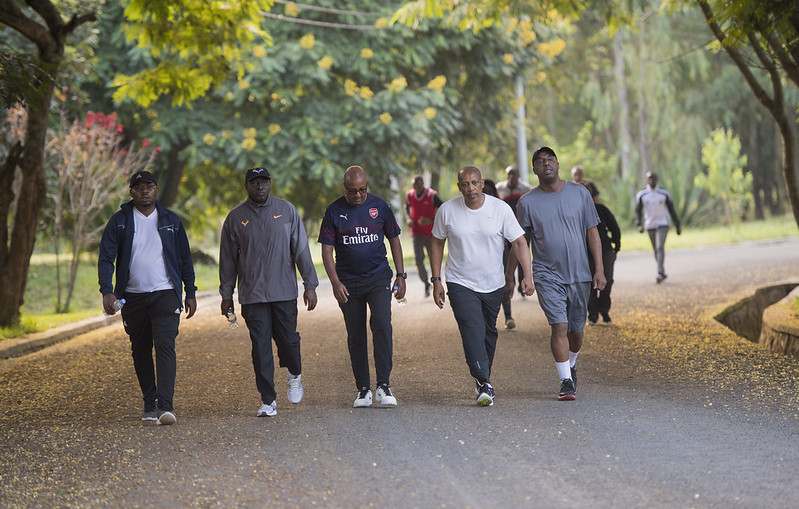 From President Paul Kagame openly speaking about ministers who resigned recently to the Mayor of Bugesera district getting himself in the hotspot, day one of the 17th National Leadership Retreat, Umwiherero, was nothing but a day for officials to openly admit that they needed to do things differently.

“Business unusual” and “accountability” were the keywords and from the word go. One could tell the Head of State would not entertain the usual talk, running over real issues and going home four days later with the same resolutions and a similar outcome one year after when the leaders return to Rwanda Defence Forces Combat Training Centre in Gabiro.

It is the first time President Kagame openly spoke about dropping cabinet members in reference to three Ministers who resigned this month, going further to say that had he not ‘sacked them’, the trio would be in Gabiro sitting with fellow leaders as though everything was ok.

At some point, he sent the room into laughter when he struggled to remember the name of the former Minister of State for Education in charge of Primary and Secondary Education, Dr Isaac Munyakazi, saying that “I often forget the names of wrongdoers very fast”.

President Kagame also said that had the retreat started two days later, maybe 3 more ministers wouldn’t be in attendance. For the first time, he said that he was not in the mood for diplomacy or niceties, mentioning that he sacked the Ministers instead of the known narrative of “resigning”.

From the onset, he also made it clear that he was not going to accept a situation where officials come to the same venue, repeat the same issues and go back to their homes and return with the same issues next year –the 17th Umwiherero was going to be different.

“Everything that we have not done right in the last 17 years, where we have fallen short, it is not because those who were given those responsibilities did not know what they are doing,”

“The reason for not doing the right thing is having the wrong values. You have knowledge and you know what you are doing but you have the wrong values,” President Kagame said, warning the leaders against misconduct and other behaviours that affect delivery.

He said that if an official can’t do what is expected of them, there is no shame in resigning and saying that “I cannot execute the duties you assigned me”, either because the duties given to them are above their capacity or they simply can’t match the pace at which they are expected to deliver.

With a microphone in hand, moving around the hall, President Kagame’s intention was to send a message to the young people in the room that as they plan to take over from their elders, there are certain practices they should not inherit.

“It’s never too early to be responsible and mature, to understand the strategic imperatives of our country, this Rwanda can only survive if we do things differently,” President Kagame said, adding that there are certain bad practices they don’t need to copy from the current cohort of leaders.

He reiterated the need for accountability, pointing out that not being accountable has short term profits for those who don’t hold themselves accountable but it is not sustainable.

He asked the Minister of Infrastructure Claver Gatate how it is done in developed countries such as Canada since he worked there and the Minister responded that they don’t tolerate incompetence and lack of accountability.

President Kagame also narrated to the audience his own experience of the different cabinets he has worked with from the time he was the Vice President and Minister of Defence 25 years ago, pointing out that the first cabinet which had the likes of Dr Donald Kaberuka, who was in the house, was the most efficient and responsible, despite the difficulties at the time.

“The first cabinet had people who knew the weight of the task at hand. They never caused us any problems and we worked together perfectly. They knew the strategic importance and weight of the issue,”

“The second group was even more difficult. They tossed up everything and politicized everything. They were so entitled but in actual sense had nothing to bring to the table,” he said, giving an example of former Prime Minister Faustin Twagiramungu.

President Kagame joked about Twagiramungu, saying that he understands the Octogenarian still harbours plans to be President.

He said that the likes of Twagiramungu thought that it was a favour for Rwandans who had returned from exile, including those who liberated the country to be back in Rwanda, and that was enough.

“They cared less about development or growth. They left that to donors,” President Kagame said, recalling one of the Ministers at the time who opposed the idea of the country weaning itself off World Food Programme (WFP).

“I will not mention her name. I will spare her since she is a woman but she said cannot do away with WFP. She did not want to hear that Rwandans have now stabilised, they can work, grow food and sustain themselves,” he recalled.

“If you can’t separate your individual interests and national interests, you better do it now. We have worked our way out of the most difficult situations and we are in a better place today. If we agree on things, let us do them,” President Kagame said, adding that unlike some African countries where lack of accountability and scrutiny is a norm, there is no such luxury in Rwanda.

“The level of scrutiny, the level of demand on us, we never complain that the world has held us to account even on wrong things, this has made us better people, this has strengthened us,”

“But we shouldn’t stop now, responding to our challenges the right way, even given the times we find ourselves in, and should concentrate on that and see how we fit in with the rest of the world. We should leave here having taken a step further in how better we can be and perform and keeping in mind our responsibilities,” he said.

Giving a report on the execution of resolutions from the 16th National Leadership Retreat, the Prime Minister Dr Edouard Ngirente said that 53 areas of action were identified out of the 10 resolutions adopted at the end of Umwiherero last year.

Out of those, 42 activities were successfully implemented at the level of 75.5 per cent while 10 were executed at a success rate between 50 per cent and 74 per cent while one target was not met.

“Though we delivered well on some of the expectations, we did not achieve our target and as leaders we need to hold ourselves accountable here and be categorical on what we need to do by identifying where we fell short and holding those responsible accountable,” he said.

Among other challenges, he said it had been agreed that each sector should have a vocational training centre (TVET) but that target was not met while some districts did not implement a resolution on reducing fees levied on cooperatives with activities in marshlands which were identified as a burden.

The Mayor of Bugesera Richard Mutabazi found himself on the hot spot after he attempted to justify the delay in the execution of the resolution, with President Kagame asking him to explain if the PM lied in his report.

Efforts by the Minister of Local Government Prof. Anastase Shyaka to intervene and clarify on the issue did not help matters as the head of state was not impressed by the attempted justification of mistakes by the mayor. Mutabazi apologized and promised to take action, getting himself off the hook.

The former President of the African Development Bank (AfDB) and current Chair of the board of the Global Fund to Fight AIDS, TB and Malaria, Dr Donald Kaberuka gave a presentation on Rwanda gearing up for 2050, giving a continental perspective of what Rwanda needs to do to stay the course and achieve Vision 2050 targets.

In his presentation, Dr Kaberuka highlighted what Rwanda needs to do to sustain the momentum towards achieving middle and high income status by 2050, by avoiding some of the mistakes made by African economies which were promising 30 years to stagnate or even fall back into poverty.

Among the countries he mentioned which he had predicted 1990 to achieve high income status in two decades from then was Zimbabwe, Mauritius, Ivory Coast and Kenya. Only Mauritius achieved the predicted status.

“By 2030, poverty will have an African face. Other parts of the world will have done away with poverty by then. We have countries that had been doing well but they stagnated,” Dr Kaberuka said, adding that sustaining double digit growth will be key.

“If we don’t change a few things, we won’t achieve our goals. We need to sustain double digit growth for at least 8 years in order to avoid volatility. If we maintain an average of 10 percent growth, it will double in 7 years,” he said, adding that double digit growth is only existential if not sustained for more than 8 years. 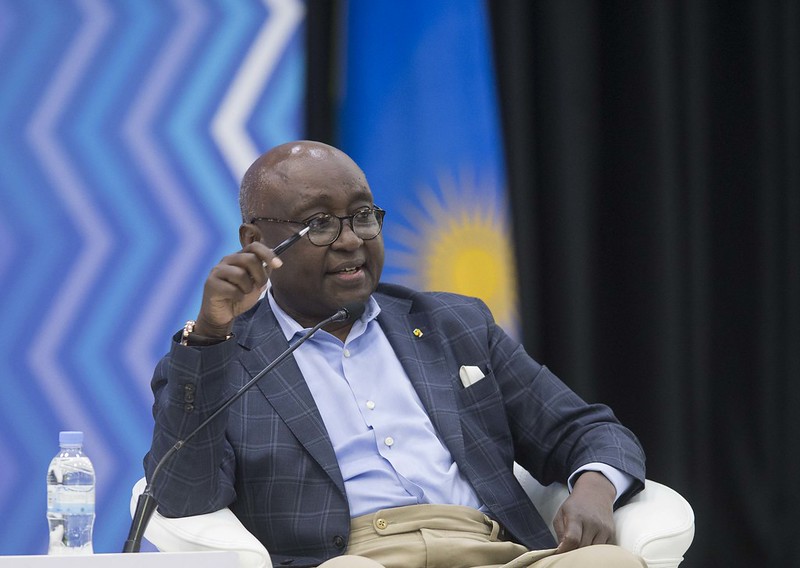 For that to happen, he said investment has to increase by 40 per cent and the country has to attract Foreign Direct Investment consistently while at the same time consistently and efficiently implementing the Vision 2050 plan.

“Rwanda has a good plan. It reflects growth, transformation, sustainability and value. Ivory Coast and Zimbabwe fell back because they lacked sustainability and resilience, which must be part of the plan. You must face the challenges and avoid volatility by all means,” he told the leaders.

Dr Kaberuka said that he believes Rwanda can achieve the target because today the country has young and skilled people unlike in the past.

“The capacity is there. Also the country is more secure today and the international environment is less hostile unlike in the past. Today there are issues in the region but they are manageable,” he said.

He said that Rwanda’s brand gives the country a comparative advantage as a clean country, open to doing business, zero tolerance of corruption and stability among other things but the brand must be safeguarded on the ground. 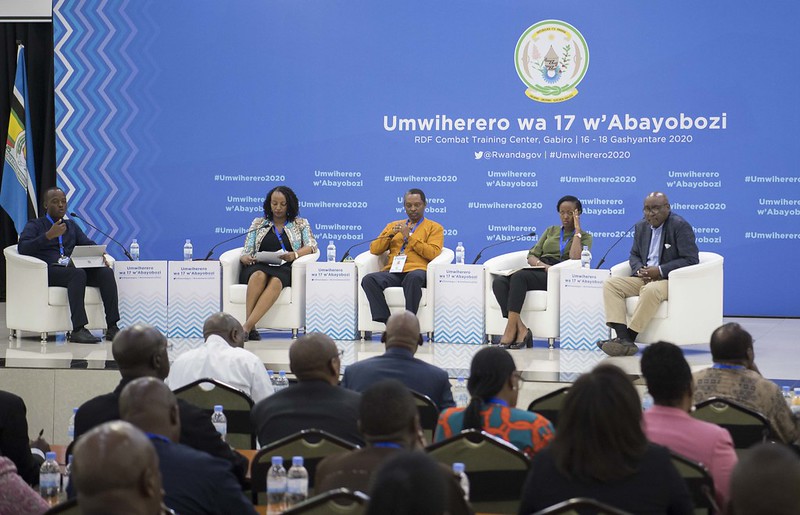 The day was concluded by a session on ‘the next 30 years, moving away from business as usual’, featuring the Ministers of ICT and Innovation, Local Government and Trade and Industry.