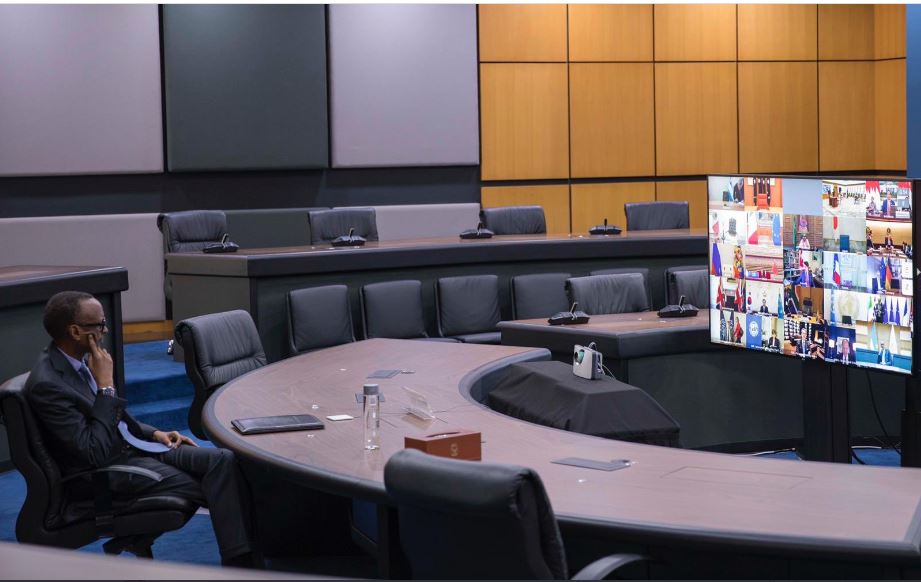 President Paul Kagame on Thursday joined global leaders in a G20 virtual summit aimed at addressing the New Coronavirus pandemic in his capacity as the Chairperson of the African Union Development Agency- AUDA- NEPAD Heads of State and Government Orientation Committee (HSGOC).

“Today at Urugwiro Village, President Kagame who is also currently serving as Chairperson of the AUDA-NEPAD joined G20 leaders for the Extraordinary #G20VirtualSummit on #COVID19,” the Office of The President said.

Photos released by Village Urugwiro showed President Kagame infront of a big screen discussing with leaders from the Group of 20 nations in an extraordinary G20 Summit held via video conference during which the leaders agreed to unite in the fight against the global pandemic.

The summit which was chaired by King Salman of Saudi Arabia sought to pool together efforts and resources in global efforts to fight Coronavirus in a bid to minimise the socio-economic impact it is expected to have on world economies.

“We are holding this meeting to carry out our responsibilities as the leaders of the world’s largest economies, in order to combat the COVID-19 pandemic, which requires that we take firm measures on various fronts,”

“This human crisis requires a global response. The world counts on us to come together and cooperate in order to face this challenge,” the Saudi King added.

A statement released by the summit said that they committed to do whatever it takes to stop the pandemic, together agreeing to put in $5 trillion into the global economy to combat the disruption caused by COVID-19.

“We are injecting over $5 trillion into the global economy, as part of targeted fiscal policy, economic measures, and guarantee schemes to counteract the social, economic and financial impacts of the pandemic,” the statement said.

Chinese President Xi Jinping called for stronger efforts to fight the virus which started in his country before spreading to other parts of the world, tariff cuts and the removal of trade barriers to prevent the global economy going into recession.

“This is a virus that respects no borders. The outbreak we are battling is our common enemy. All must work together to build a strongest global network of control and treatment that the world has ever seen,” Xi said.