Rwanda has demanded for explanations from the Burundian government and immediate action to apprehend a group of armed elements who attacked a village in the Southern Province district of Nyaruguru on Saturday, June 27.

Rwanda Defence Force (RDF) said it repulsed the group of armed assailants who came from Burundi and attacked a village in Ruheru Sector, Nyaruguru district in the wee hours of Saturday morning. Four of the attackers were killed according to the army.

Now the Ministry of Foreign Affairs and Cooperation has officially written to the Burundian government through diplomatic channels seeking explanations and calling for the arrest of the armed group.

“The Ministry of Foreign Affairs and International Cooperation of the Republic of Rwanda wrote to the Ministry of Foreign Affairs of the Republic of Burundi requesting for an explanation regarding the attack by unidentified attackers from Burundi and urged the Government of Burundi to take all necessary measures so that those guilty of that criminal act, who withdrew to Burundi, be quickly arrested and brought to justice or extradited to Rwanda so they can answer for their actions,” the Ministry confirmed to KT Press on Monday.

The letter was sent the same day of the attacks but the Burundian government is yet to respond. However, the Burundian army, National Defense Force of Burundi (FDNB) issued a statement seemingly denying the attacks.

Rwanda’s Military Spokesperson, Lt Col Innocent Munyengango said that the RDF engaged the attackers who, were about 100, before they withdrew back to Burundi.

“The gunmen attacked from Burundi and they fled back in the same direction towards Burundi military position at Gihisi, Commune Bukinanyana, Cyibitoki province. Assailants left behind four of their dead, military equipment that include weapons and communication radios, and dry rations marked “FORCE DE DEFENSE NATIONALE DU BURUNDI” (Burundi Armed Forces),”

“Three of the attackers were also captured. Three RDF soldiers sustained minor injuries. We reassure Rwandans that action will be taken against those responsible. We are pursuing, through diplomatic channels, precise information about these repeated attacks,” the Army Spokesperson said.

In the army statement, the Burundian army said “Burundi cannot be a sanctuary for armed groups”, but did not comment about the materials and equipment RDF seized, which are inscribed with the national army insignia.

Burundian media reported that eyewitnesses who saw the group said that the attackers were speaking Kinyarwanda and went through Ruhembe and Bumba area, in Bukinanyana commune and Gafumbegeti, Butahana area in Mabayi commune to Cibitoke Province, north -West Burundi before crossing over to Ruheru where they planned to attack an IDP Model Village in Nyaruguru district. 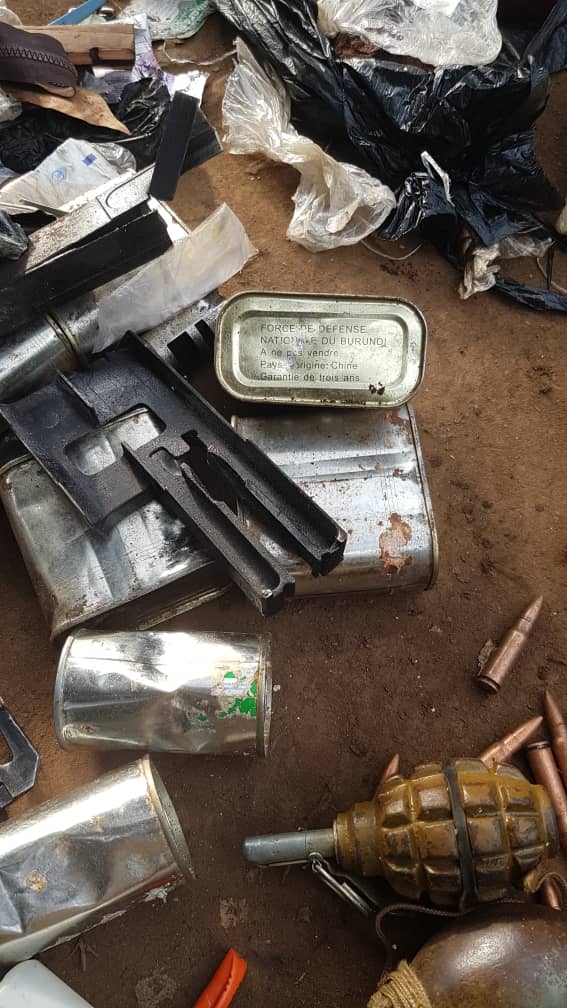 According to SOS Media, a credible Burundian media outlet, Residents of Ruhembe, which borders Rwanda say they panicked when they saw heavily armed men earlier around 4pm as they moved towards Rwanda but they were calmed by local authorities who urged them to keep calm and stay in their homes.

Quoting reliable sources, the media said that some of the attackers who were injured when the Rwandan army fought back were retrieved by the Burundian soldiers.

“Two of the attackers were seriously injured and were evacuated using an FDNB vehicle,” witnesses told SOS Media Burundi, which added that they were picked up by an army pick-up, similar to those driven by commanders. The pick up traveled through Ndora-Bubanza road but it is not yet clear which hospital they were taken to.

Rwanda said it is not the first time the armed groups have attacked Rwanda from Burundi.  Similar attacks were launched on the same district which has part of Nyungwe Forest, in Nyabimata Sector, in June 2018.

The attacks which claimed scores of people and injured many were attributed to the Front de Liberation National (FLN) which was led by a one ‘Maj’ Callixte Nsabimana.

Nsabimana, who was arrested and deported to Rwanda in April 2019, said in court that they were facilitated by the late Burundian President Pierre Nkurunziza’s government, to cross over from Democratic Republic of Congo (DRC) and establish bases in Burundi from where they launched the attacks, which were also repulsed.

Nsabimana, who is currently on trial, facing 16 terror and treason-related charges, said that they were backed by several countries in the region including Uganda, from where they recruited.

In the ongoing trial of 33 people linked to the terror outfits P5 and Rwanda National Congress (RNC), suspects intimated how they were facilitated by the Burundian army in training and later transiting to Democratic Republic of Congo (DRC).

Rwanda maintains that Burundi harbours and supports elements keen on destabilizing Rwanda, including members of the Democratic Forces for the Liberation of Rwanda (FDLR).