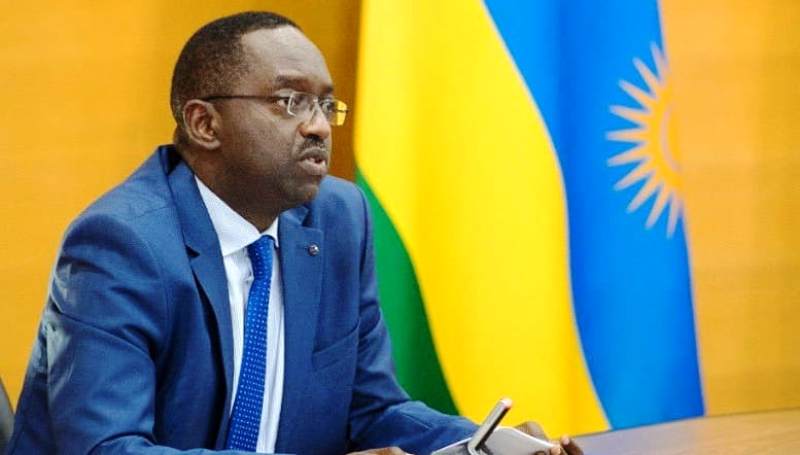 Trade and movement of goods between the two border towns of Rusizi on the Rwandan side and Bukavu in Democratic Republic of Congo (DRC) is the main source of new coronavirus infections recorded in recent weeks in the border town.

This was revealed by the Minister of Health Dr Daniel Ngamije on Sunday while appearing on a weekly talk show ‘Urubuga rw’itangazamakuru’, revealing that the recent trend of new infections pointed to traders and truck drivers who moved goods, especially cement, between Rusizi and Bukavu towns.

“There was huge traffic of traders who moved goods between Rusizi and Bukavu, during that period when there was a countrywide lockdown. As you might know, trade and movement of goods continued even when borders were closed,”

“During that time, the traders moved a lot, moving goods from Rwanda to the DRC town of Bukavu but I can say that in doing so, there was a level of laxity in observing the measures which had been set out to contain the spread of COVID-19, including quarantining all returning citizens,” Dr Ngamije said.

The Minister of Health explained that even though Bukavu was near, a stone throwaway from Rwanda, people returning from business errands were supposed to be quarantined as any other returning citizens but that was not done.

“Many of the traders and truck drivers, especially those who were moving cement from Rwanda to DRC, somehow managed to skip isolation and would instead go to their homes from their trade errands in Bukavu,”

“However, this was not the case in Rubavu because in that district, the measures were adhered to. All traders who returned from Goma during that period would be taken into isolation. Transactions including foreign exchange were being done digitally in Rubavu, which was not the case in Rusizi,” Dr Ngamije explained.

It was a result of that laxity in Rusizi that cases multiplied, leading to the current measures where at least 5 sectors in the district remain under lockdown. Public transport to and from the districts of Rusizi and Rubavu is still not allowed while other districts along the Kivu Belt remain under monitoring.

Dr Ngamije said that there were some loopholes in the implementation of measures in Rusizi district, which led to difficulties in tracing people due to the huge traffic between the two border towns.

He said that the cases were unearthed during the random tests and assessment which was being done country wide at the beginning of June, to inform the gradual reopening.

“We did mass testing in different parts of the country to as part of the assessment we did to inform a decision by the government to reopen different services in the economy. In Kigali alone we tested over 5, 000 people. That was on June 1,”

“However, when we went to Rusizi, we tested just over 150 people, out of those, five people tested positive all of a sudden. These were people who were not connected in any way. A trade, a driver, informal traders, vendors etc. When we investigated further, we found that these people were linked to cross border trade in one way or another,” he explained.

Upon discovering that, he said the government took a decision to put in place tough measures to specific to the district to contain the infections. Indeed, as days went by, the numbers spiked with daily figures going above 20, 30 and over 40 as more tests were done in the district.

Dr. Ngamije said that efforts were directed towards mass testing, isolation and contact tracing, to minimise the spread, while the lockdown was reintroduced.

Even then, he said challenges remain, including people using shortcuts not just to move around the district, while others went as far as finding their way to Kigali after public transport resumed but Rusizi and Rubavu remained out of bounds.

However, through cooperation with citizens and joint initiatives between institutions, most of the suspected people have been traced and tested and isolated where necessary.

The wife informed authorities and husband was taken for testing and isolation and he later tested positive of COVID-19. He was admitted and treated. Dr Ngamije said that it is this kind of vigilance that is needed to defeat the virus.

During the talkshow, the Spokesperson of Rwanda National Police (RNP), CP John Bosco Kabera said that there are still challenges when it comes to enforcement of measures against COVID-19 as people increasingly become complacent.

“The virus is still with us. That is what we need to know. When we say that you should wear your mask, observe hygiene measures and ensure social distancing, we are asking you to protect yourself and others,”

“If we ask you to report in a timely manner, get home early and be on the look out for possible risks of infections, it is for your own protection. You are not doing it for the government but for yourself and your loved ones,” CP Kabera said.

He equated the measures to medicine which has been subscribed by a doctor, which you must take to address a health condition and if you avoid taking the medicine or lie about taking your dosage, your will not be treated of the condition.

The Police Spokesperson said that people don’t need to be policed to adhere to measures against COVID-19 but should adhere to them out of personal and collective responsibility.

On Sunday, Rwanda registered 22 new cases of COVID-19 out of 3,002 tests. According to the Ministry of Health, of the new cases, 8 were recorded in Rusizi district, 7 in Rubavu, 6 in the CityofKigali and 1 in Kirehe district. 30 new recoveries were recorded, bringing total recoveries to 443 while Active Cases  are 455.