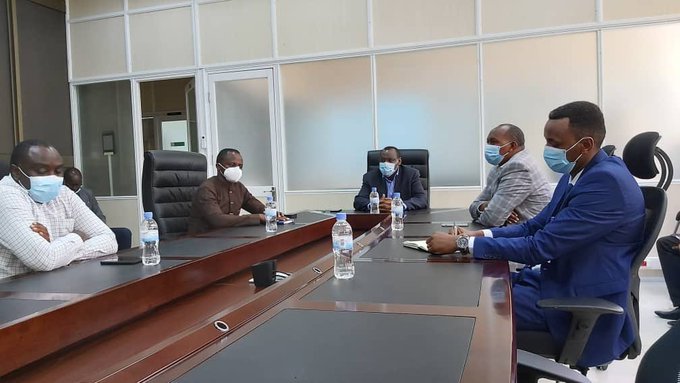 Charles Habonimana (signing) at the handover

The New Managing Director of Rwanda Airports Company (RAC), Charles Habonimana took office on Wednesday during a handover ceremony at the Ministry of Infrastructure, presided over by Minister Claver Gatete.

RAC Board Chairman Zephanie Niyonkuru, who is also the Deputy CEO of Rwanda Development Board (RDB), was also present on behalf of RAC Board of Directors.

President Paul Kagame appointed Habonimana as new Managing Director of the company on June 25, replacing Karambizi, following a gaffe on June 19 that saw the RAC announce that Kigali International Airport (KIA) had reopened despite existing measures against the spread of the New Coronavirus.

Rwanda closed all borders in March, including the airport, to contain the spread of COVID-19. The airports company went on to clarify that by saying that ‘general aviation’ had reopened, they meant for chartered and private planes but it was a little too late, for a government that puts emphasis on efficiency.

“We wish to clarify that “general aviation” refers to tourist charter and private flights only. Commercial passenger service is still suspended. An updated notice will be issued later,” the apology read.

Habonimana, who was serving as Human Resource Management specialists at Energy Utility Corporation Limited (EUCL), is described as a ‘straightforward, humble and hardworking’ leader by his former colleagues at the power utility.

The Genocide survivor and author is also revered as a ‘true leader’ among the Rwandan Graduates Genocide Survivors Organisation (GAERG) alumni where he remains active.’

Habonimana takes office at the time countries around the world are overhauling airports and aviation services to cope with the New Coronavirus outbreak which has disrupted aviation activities worldwide.

Karambizi had served for 14 months in this position where he was appointed in April 2019, replacing the Acting MD at the time, Isabelle Umugwaneza.

COVID-19: Why Border Districts Are More Prone than Others