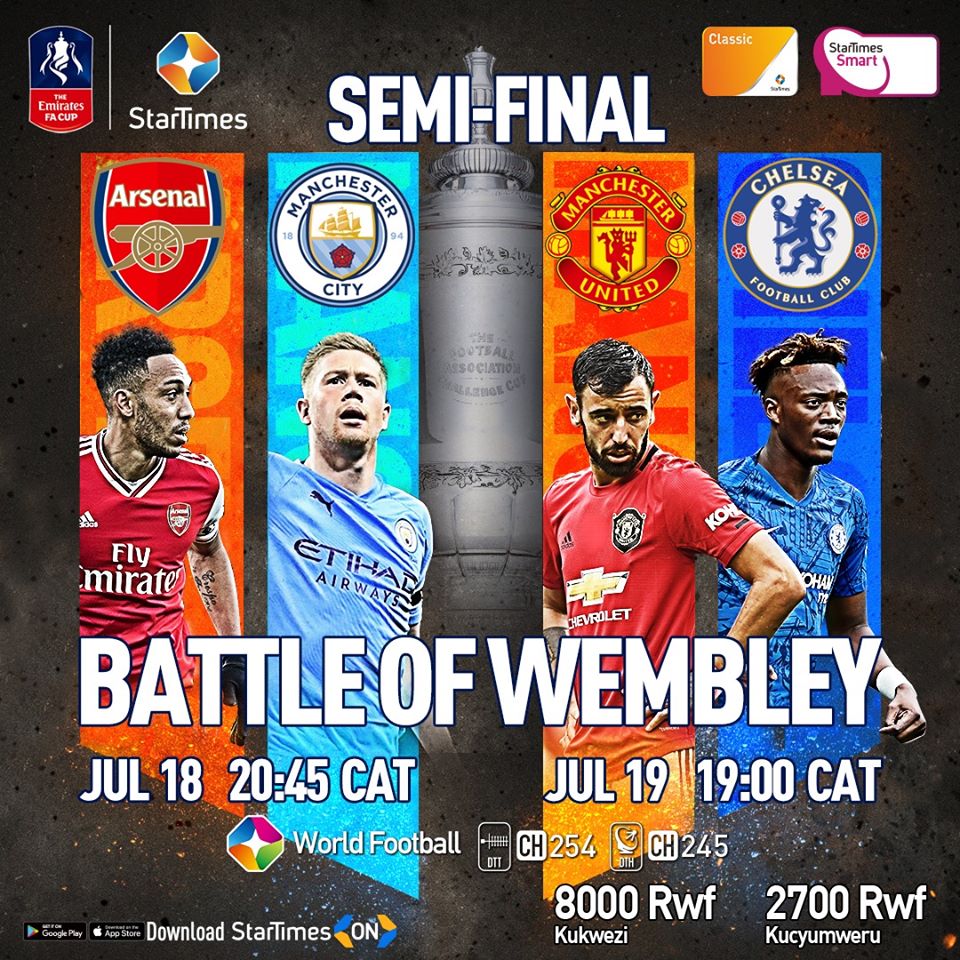 This weekend football fans will enjoy the Semi Finals of the Emirates FA CUP.

Classic, Smart, Unique, Super, and Max bouquet subscribers will be stuck on their chairs watching the battle of Wembley enjoying the best players FA CUP semi-finals can offer. If you are not subscribed pay StarTimes Classic Bouquet (8,000Rwf/month, 2700Rwf/week) or Smart Bouquet (8500/month, 2850Rwf/week).

When four of the best clubs in English football take to the field at Wembley Stadium this weekend, they are all hoping for another date at the same venue two weeks later.

Since the 2007/8 season both FA Cup semi-final matches are played at the iconic stadium, with the two winners appearing in the final of the world’s oldest domestic football competition a short while later.

Despite Liverpool having been knocked out of the competition in the fifth round by Chelsea, the remaining clubs represent the remaining crème de la crème of English club football, with Manchester City, Manchester United, Arsenal and Chelsea all still in line to win the coveted trophy.

Arsenal take on Manchester City in the first game on Saturday, with form definitely favouring the Citizens. Since returning from the forced coronavirus break, the Gunners have won just three of the seven league matches they have played, losing three as well, including a 3-0 defeat against Manchester City at the City of Manchester Stadium.

Pep Guardiola’s team, on the other hand, have been impressive, ensuring 5-0 victories against Newcastle, Brighton and Burnley, as well as a morale-boosting 4-0 win against newly crowned Premier League champions Liverpool.

The Spanish coach said even though they had lost the league title to Liverpool, they were still looking at a great season. “We have some incredible weeks ahead and making it to the final in Wembley would be terrific.”

Their city rivals, United, are another in-form team and have played themselves back into contention for a place in the top four in the league, with Portuguese striker Bruno Fernandes (5), Anthony Martial (4) and Mason Greenwood (4) getting amongst the goals in the five matches the club has played.

In Sunday’s semi-final the Reds are facing a Chelsea side, who have been blowing hot and cold since returning to the field. They beat Manchester City, but lost 3-0 at Sheffield United on the weekend.

Between them, the two coaches – Ole Gunnar Solskjær and Frank Lampard – have appeared in eight FA Cup finals, with both being on the losing side once. Solskjær’s defeat came in 2007, when United lost against Chelsea, with Lampard winning the man of the match award in that game.

England international Ross Barclay, who scored the winning goals for the Blues in the quarter-final against Leicester, believes Lampard having won the competition four times as a player, will help the current squad.

“It’s the mentality of the club and the gaffer since he’s been back. He wants to win every game and it’s a trophy. Chelsea are a massive club, we win trophies every year and everyone’s motivated with every FA Cup game,” he said after the win against Leicester.

With a place in the Europa League on offer for the winners of the competition, there is even more to play for, for all four sides.

And football fans throughout Africa will be able to see which two teams emerge victorious this weekend, as the continent’s leading digital-TV operator, StarTimes, has secured the rights to broadcast the exciting competition.

Both games will be shown live on the StarTimes World Football DTT 254, DTH: 245.