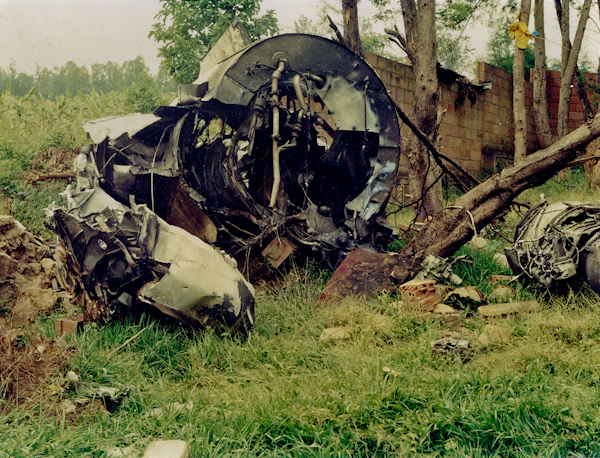 Habyarimana’s plane crash. It was proven that the crash was dawned from Kanombe military barracks

The Rwandan government is less concerned by a recent decision by a French court to drop an investigation into the shooting of the plane of the former President Juvenal Habyarimana, initiated by former French Judge Jean-Louis Bruguière.

Rwanda’s Minister of Justice and Attorney General Johnson Busingye on Wednesday affirmed that the investigation was a travesty of justice and a political witch hunt which shouldn’t have happened in the first place.

On July 3, the Court of Appeal of Paris dismissed the case, for the umpteenth time, which targeted nine senior Rwandan government officials after 14 years of back and forth and several dismissals and reopening of the case which Rwanda said were deliberately aimed at inconveniencing the officials who were all high ranking members of the then rebel movement Rwanda Patriotic Front (RPF-Inkotanyi).

Minister Busingye said that Rwanda cannot jubilate over the decision because it has always challenged the grounds on which the investigations and indictments came about and the fact that the cases was more of a political witch hunt than it was e about Justice.

Busingye said that there have been several dismissals of the case in the past, only for the file to be reopened but Rwanda’s position has always been that the file shouldn’t have been opened from the onset.

“When they made a decision to dismiss the case on July, that was the second dismissal. The first dismissal was in 2018 and in 2012 we had a technical report by the Judge leading a technical team, that scientifically told the world that the Habyarimana plane was shot from the space within Kanombe barracks,”

“So, the whole world should have seen what we have always said ever since this case began, that this was a travesty of Justice,” the Attorney General said, emphasising why he as always referred to the French investigations as ‘a travesty of Justice’.

He said that by saying it was a travesty of Justice, he was looking at different aspects including the timing of the case, pointing out that it began when it shouldn’t have begun and was built on very wrong premises.

He said that there were many wrong assertions made by the judge, including referring to the government officials as members of an occupying force that occupied Rwanda in a bid to amass resources, among many other ridiculous accusations.

Busingye said that after long delays characterised by clandestine activities by the said Judge, the case was taken over by other judges who succeeded Bruguière and came up with a technical report which led to the first dismissal in 2018.

He said that even before that, several reports had been published and they all pointed to the conclusion that the plane was shot from Kanombe military barracks, by Hutu extremists within President Habyarimana’s government who did not want him to continue with the peace talks.

Habyarimana’s plane was downed by a missile on April 6 1994 as he returned from Arusha where he had attended peace talks with RPF to cease fighting.

“In 2018 there was the first dismissal by the Grand Instance Court of Paris. Again, this was based on the same grounds. On the 3rd of July, the case was again dismissed,”

“So, what I meant by travesty of Justice was that in the first place, Justice should begin because there is a justiciable matter but not because there is an ambiguous suspicion that an offense has been committed by this particular person that I am suspecting,” the Attorney General said, adding that in this case there was nothing like that, which is why he has always maintained that is a travesty of Justice.

He described the case as a hoax and hopes that the recent dismissal is probably the last, adding that any objective court or process would have dismissed it earlier, pointing out that it is a shame that the political witch hunt had continued to go on, all in the name of rule of law.

“But that’s how the world is. We will continue to observe what’s happening and whatever comes up,” he said, adding that it is the reason Rwanda cannot see it as a victory because the process shouldn’t have started in the first place.

Bruguière issued the indictments against senior RPF officers in 2006 after he claimed that RPF was behind the shooting of Habyarimana’s plane on April 6, 1994, thus sparking off the Genocide against the Tutsi, which claimed over one million people.

The case angered the Government of Rwanda, which cut ties with France until 2010 when President Nicolas Sarkozy took an initiative to defrost the relations and embark on a process to get to a conclusive end of the case.

A commission set up by the Rwandan government in 2010 corroborated findings that the surface-to-air missiles that hit the Falcon 50 plane that was carrying Habyarimana and Burundian President Cyprien Ntaryamira came from Kanombe military barracks which was occupied by government forces.

The report, known as the ‘Mutsinzi Report’, named after Dr Jean Mutsinzi, who led the investigations, concluded that Hutu extremists within Habyarimana’s inner circle, who were against the Arusha Peace Talks, downed the plane.

In 2010, confidential US diplomatic cables leaked by Wikileaks, the whistle-blowing website, confirmed that the retired French judge confirmed Bruguière he had reached an understand with the then French government of President Jacques Chirac, on the timing on the issuance of arrest warrants against top RPF officials.

Bruguière began investigations in March 1998 after a complaint submitted by the daughter of one of the pilots of Habyarimana’s plane, Jean-Pierre Minaberry, who died in the crash.

Over a decade ago, French journalist Jean-François Dupaquier in an investigation revealed that there was serious manipulation of evidence in Bruguière’s case, pointing to clandestine efforts to settle political scores against the current Rwanda government.

President Paul Kagame has over the years maintained that the accusations were simply aimed at inconveniencing the accused officials and that they are more political than they are about justice.

Sponsored: Updated Education Sector of StarTimes ON to Serve Users of All Ages