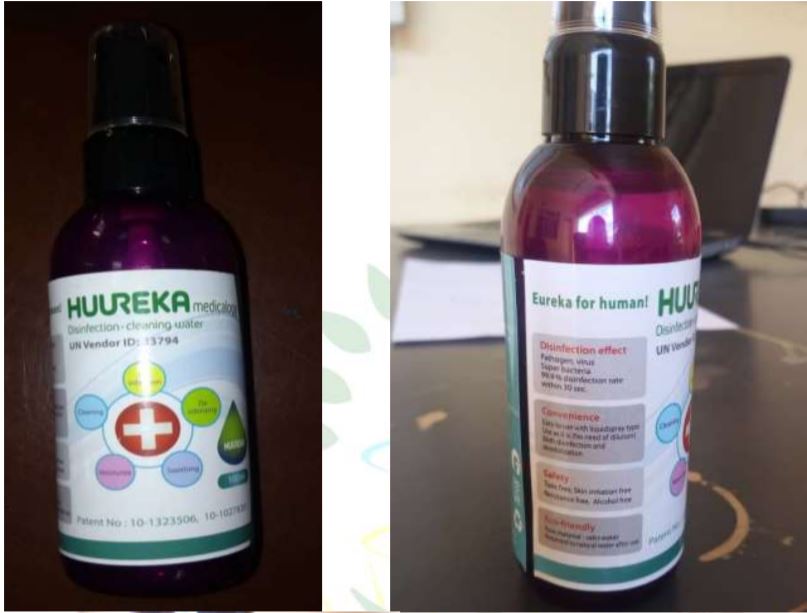 Rwanda Investigation Bureau (RIB has arrested a man accused of selling substandard sanitizer, which has been banned, to motorcycle taxi operators in Kigali.

RIB said  Jean Claude Tuyisenge has been selling the banned hand sanitizer, known as Huureka, to taxi motos, signaling fears that passengers could have been unknowingly using it.

“RIB has arrested Tuyisenge Jean Claude on charges of selling prohibited substances in medicine after he sold substandard HUUREKA hand sanitizers to taxi motorist associations to safeguard passengers against COVID-19. Investigations are ongoing to file a case for Prosecution,” RIB said.

According to a temporary ban notice issued by the Rwanda Food and Drug Authority (FDA) on June 11, 2020, Huureka, which is defined as a “medicalogy disinfection-cleaning water, containing Hypochlorous acid >50 ppm”, was imported by Africa Medical Supply Company Limited and it is manufactured by a South Korean Company, KEWS Corporation, located in Kyunggi- do, Suwon City.

“Based on the information we have, HUUREKA Disinfectant was imported into the country without prior notice to Rwanda FDA so that it can evaluate its quality to approve the use of the drug. Rwanda FDA therefore announces the suspension of the drug,”

“While the Rwanda FDA is following up on the matter, samples of the drug are being tested and laboratory tests are underway,” a notice signed by  the FDA  Acting Director General, Dr Charles Karangwa reads, adding that manufacturers, buyers and sellers must stop selling or buying the sanitizer until further notice.

Rwanda FDA has already banned a number of sanitizers including locally manufactured ones such as Oxalis and Beu. Last month, Rwanda FDA banned the use of ‘99% Methanol Alcohol’ hand sanitizer, manufactured by KVM Co. Ltd, which was also being distributed locally.

Earlier this year when the New Coronavirus broke out, World Health Organisation (WHO) said that using alcohol-based hand sanitizers, along with hand washing, was an effective way of preventing the spread of COVID-19, which led to an upsurge in the sales of the products.

The Acting Spokesperson of RIB, Dr Thierry Murangira said that RIB will continue to work with concerned authorities to crackdown on the sell of substandard products which might endanger the lives of Rwandans.

“RIB reminds Rwandans that it will not tolerate anyone who will be caught in the trade of substandard equipment which put the lives of Rwandans at risk,” the investigative body warned.