COVID-19: Rwanda Registers Highest Number of Deaths in One Day 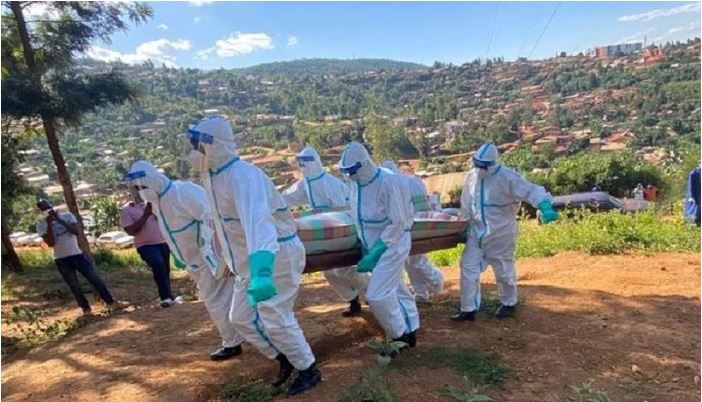 A COVID-19 victim being laid to rest.

Rwanda on Sunday registered the highest number of deaths resulting from New Coronavirus in one day, with four new deaths reported and 61 new cases. It is the first time more than 2 deaths have been reported in one day.

Rwanda has now registered 63 deaths and 7,293 total cases since the COVID-19 outbreak in Rwanda in March this year. Earlier this week, the Minister of Health Dr. Daniel Ngamije said that the New Coronavirus has evolved, increasingly affecting much younger persons and also getting more people in a critical condition.

The country has in the last two weeks seen a spike in new cases, which prompted the Government to tighten measures against the New Coronavirus, with more restrictions expected as the festive fast approaches. From December 22, curfew time will come from 9pm to 8pm, as the government looks to limit festivities, which could lead to a further upsurge of new infections.

Countries around the world are looking to tighten measures as the second wave of COVID-19 is proving to be much tougher to contain. In Europe, several countries are considering spending Christmas under a lockdown, as developed countries with means begin rolling out the vaccine.

On Wednesday, Dr Ngamije revealed that the arrival of the vaccine could take much longer than it had been earlier reported, clarifying that the March timeline is the target the government has given itself to have secured the vaccine through international initiatives such as the COVAX arrangement and through GAVI.

Though he did put a date, Dr Ngamije seemed to indicate that is likely to wait much longer but could be among the first African countries to receive the vaccine.