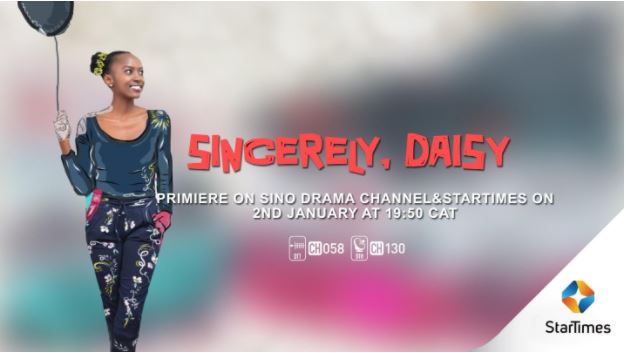 Sincerely, Daisy revolves around a young girl called Daisy, who seems to have secured her future after excelling in her final year of high school. Things however, take a turn for the worse when she realizes that her dreams of studying abroad could be shattered because her family cannot afford to pay for it. Coupled with life’s challenges, this realization sets Daisy off on a downward spiral of unfortunate events that test her relationship with her family, boyfriend, and friends.

Sincerely, Daisy has a cast of 10 actors, including Mbeki Mwalimu, who stars in Selina, Sam Psenjen, who has been on Sue na Jonnie, Jackie Matubia, famously known for her role as Jolene on Tahidi High and Muthoni Gathecha, who has starred in several local and international productions including Kona and Pray & Prey. The new faces include Foi Wambui, a well-known YouTuber, presenter and actress and Brian Abajah who has been part of several short films.

Sincerely, Daisy will be aired on January 2nd at 19:50 CAT on ST Sino Drama channel (DTT 058; DTH 130) and on streaming service StarTimes ON. The movie was shot and completed within just seven days. Shot in Swahili, it will be aired with English subtitles.

StarTimes is the leading digital TV operator in Africa, serving 13 million DVB subscribers and 20 million OTT users in 30+ countries. StarTimes owns a 630+ channels’ content platform combining African local channels (75%) and international channels (25%, including Chinese channels 1.5%). The company’s vision is “To ensure that every African family can access, afford, watch and share the beauty of digital TV”.