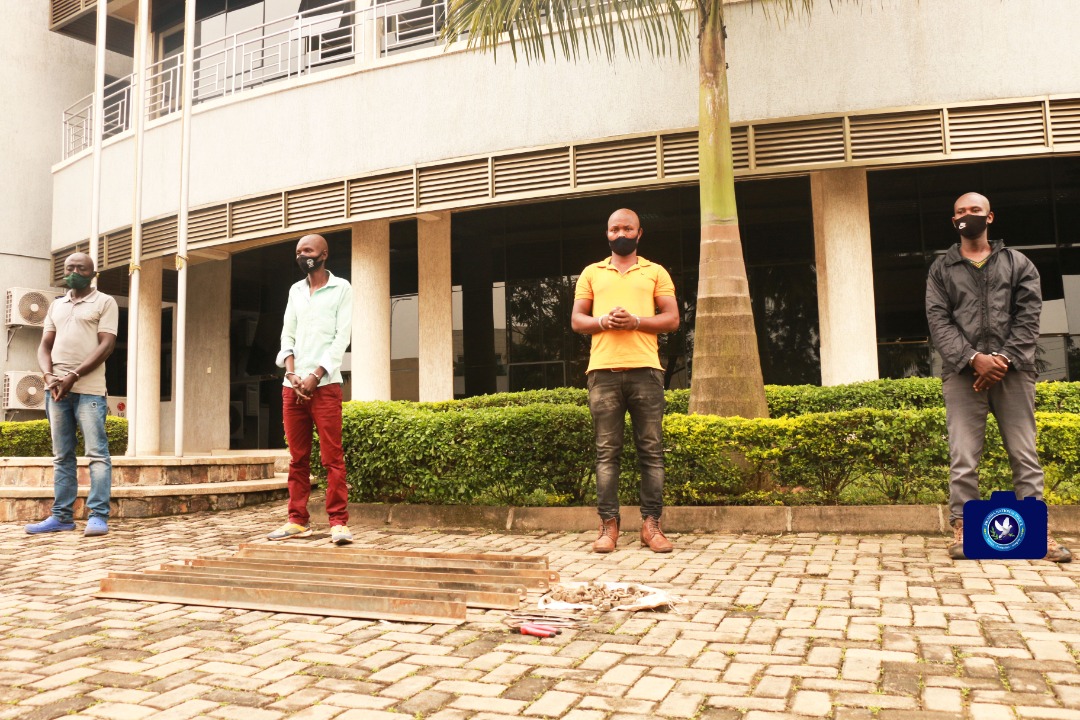 The quartet was showed to the media on Friday, January 15, at the Police metropolitan headquarters in Remera.

Uwitonze and Kubwimana were arrested together in Nyabugogo suburb of Nyarugenge District with pieces of pylons, which the latter was delivering to the former.

Meanwhile, the motorcyclist Muhirwa was arrested in Kabuye, Gasabo District on Thursday while transporting Ndayizeye with metal pieces stolen from vandalized pylons.

At the time, Ndayizeye managed to flee but was located and arrested later.

Muhirwa explained that he was hired by Ndayizeye to transport him to Nyabugogo.

“Ndayizeye entered a house in Kabuye, came out with pieces of pylons which he was taking to Nyabugogo but he run away immediately when he saw people approaching,” Muhirwa said.

Uwitonze, on the other hand, argued that he was not aware that the metal pieces he was buying and selling were stolen from pylons.

Stanley Nkubito, the head of energy efficiency and revenue protection at EUCL-REG, said that these criminal activities continue to cause power blackout in some parts of the country.

“We register at least 50 cases of people destroying pylons every year. Since the beginning of this year and this raises concern. In some cases, this vandalism cause power outage in areas that are supplied by the same electricity line” Nkubito said.

He explained that this prompted REG to constitute a team that works with security organs to fight such criminal activities.

“The effects of these criminal activities are way above the value of the vandalised pylons; Rwf50 million or Rwf60 million for one pylon is nowhere close to how much is lost by disconnecting homes, industries, factories, shops, fridges, hospitals and many other businesses that rely on electricity,” Nkubito added.

RNP spokesperson, Commissioner of Police (CP) John Bosco Kabera warned that the force will continue the search and arrest of anyone that destroys public infrastructure, which affects service delivery, lead businesses into losses as well as the government in terms of repairing the affected utilities.

“Everyone, including these suspects, benefit from electricity in one way or another. It is the responsibility of everyone to protect these infrastructures jealously to ensure that anyone that attempts to destroy them is arrested,” CP Kabera said.

According to article 182 of the law relating to offences and penalties in general in Rwanda, “any person, who maliciously demolishes or damages in any way, in whole or in part of construction, building, bridge, dams, water pipes and their routes, railway rails or any other means of communication or electric power infrastructure, wells or any other constructions, which do not belong to him/her, commits an offence.