Enjoy A Football Festival this February with StarTimes 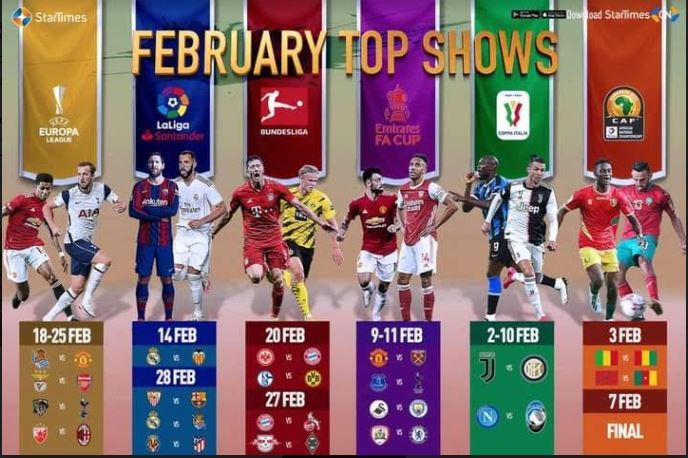 January is already over but football never stops on StarTimes.

The Coppa Italia is going into the semi-finals. Juventus Turin is visiting Inter Milan on 2 February and the Milanese will return the courtesy on 10 for the second leg. Quarter-finals round saw Inter going past AC Milan in the heated Milan derby while Ronaldo’s team comfortably beat Serie B side Spal. The other semi-final will feature Napoli and Atalanta after they defeated Spezia and Lazio respectively.

In England, FA Cup fourth round saw Arsenal get kicked out by Southampton 1-0 and Manchester United eliminated Liverpool 3-2. Fifth round is beginning on 9 February -the Red Devils will play against West Ham United at home- and concluding with Chelsea’s trip to Barnsley on Thursday 11 February. In the meantime, the Tottenham Hotspurs are visiting Everton and Manchester City are facing EFL club Swansea City.

A few days later, on 14 February, Valencia will travel to the capital city to face Real Madrid in La Liga. And to end the month on a high note, on 28 February things will get serious in Spain with Sevilla vs. Barcelona, Real Madrid vs. Real Sociedad and Villarreal vs. Atlético Madrid. Barcelona managed to catch up with Real Madrid with five victories in five matches and is eager to contest Atlético’s dominance on La Liga.

The Spanish Copa del Rey quarter finals are to be played from 2 to 4 February. Barcelona is facing Granada in Andalucía. Sevilla and Villarreal are also away against Almeria and Levante, respectively. The last game will see Spanish Super Cup winners Athletic Bilbao taking on Real Betis.

The 2020/21 UEFA Europa League group stage has now drawn to a close. The knockout stage is beginning on 18 February with the Round of 32. Great action is to be expected with Real Sociedad vs. Manchester United and Benfica vs. Arsenal clashes. Tottenham Hotspur is facing Wolfsberger and AC Milan will play against Crvena Zvezda.

This month, the Ruhr Derby will take place Schalke 04 and Borussia Dortmund in Bundesliga on 20 February. The same day, Bayern Munich will travel to Frankfurt. And one week later, RB Leipzig will meet Mönchengladbach.

All matches will be broadcast live and in HD on StarTimes Sports channels.