President Paul Kagame has spoken out on the recent report released by a French Commission of Historians established to ascertain the extent of the then French Government involvement in the events that led up to the 1994 Genocide against the Tutsi, saying that it marks an important step towards uncovering the truth.

Though the report by the Duclert Commission ruled out complicity by France, it concluded that there was failure on President Francois Mitterrand’s government, which was ‘blind’ to the preparation of the genocide and that France had “heavy and overwhelming responsibilities”

This is the closest France has come to admitting to its role and President Kagame says that Rwanda will also release its own version of the report, which will also help to ascertain the truth.

“Recently, a commission of historians appointed by the French government released a detailed report after reading official archives that had remained secret,”

“The report shows that President Mitterrand and his closest advisers knew that a genocide against Tutsi was being planned by their allies in Rwanda. Despite that knowledge, the president decided to continue supporting them, because he believed this was necessary for France’s geopolitical position. Rwandan lives were just pawns in geopolitical games,” President Kagame said at Kigali Arena.

President Kagame told the gathering which included diplomatic corps that Rwanda welcomed the report because it marks an important step toward a common understanding of what took place.

“It also marks a change, it shows the desire, even for leaders in France, to move forward with a good understanding of what happened, and we welcome this. We welcome this. We are going to have the report presented to us; I have been informed about it. It is a good thing,”

“Rwanda will also have a word to say in the near future, maybe around the third week of this month. The findings we have in our hands, based on the work that has been done by people who were commissioned to do that in parallel to what was being done in France — the findings go in the same direction,” the Head of State said, adding that the important thing is to continue working together to document the truth.

“This is the truth. The decades-long effort by certain French officials to cover up their responsibilities has caused significant damage,” President Kagame said.

He pointed out that history was falsified by promoting the lie of the so-called double genocide, including with the Mapping Report as well as fraudulent court cases which were launched in Europe against Rwanda officers and officials.

The head of state said that this was done while Genocide suspects were granted safe haven, and Rwanda’s extradition requests refused.

He added that this was not just in France but also in capitals of those “developed countries” which he did not name.

“We know of cases that have gone on for close to 15 years. There are places where there are about 4-5 genocide suspects, the files are very clear. We talked to the country hosting them, we begged them,”

He pointed out that if those countries had a problem with Rwandan courts, they should have at least tried the suspects.

“At the same time, these are the people who have all kinds of blame to level against us. We say, but why don’t you do it? Are you not ashamed of protecting genocide suspects, covering up for them for any reason?”

“You don’t want me to try them, so why don’t you try them? It’s the same people who question the use of ‘Genocide against Tutsi’,” President Kagame said.

He also said that the same countries have also been reluctant to use the term ‘Genocide’ to refer to what happened in Rwanda, as though Rwanda invented the word.

“This word was coined by some other people long ago, long before our own tragic situation. But somebody says, you know, we don’t want to accept ‘Genocide against the Tutsi’ because peacekeepers died, foreigners died, Hutus died, everybody was killed,” 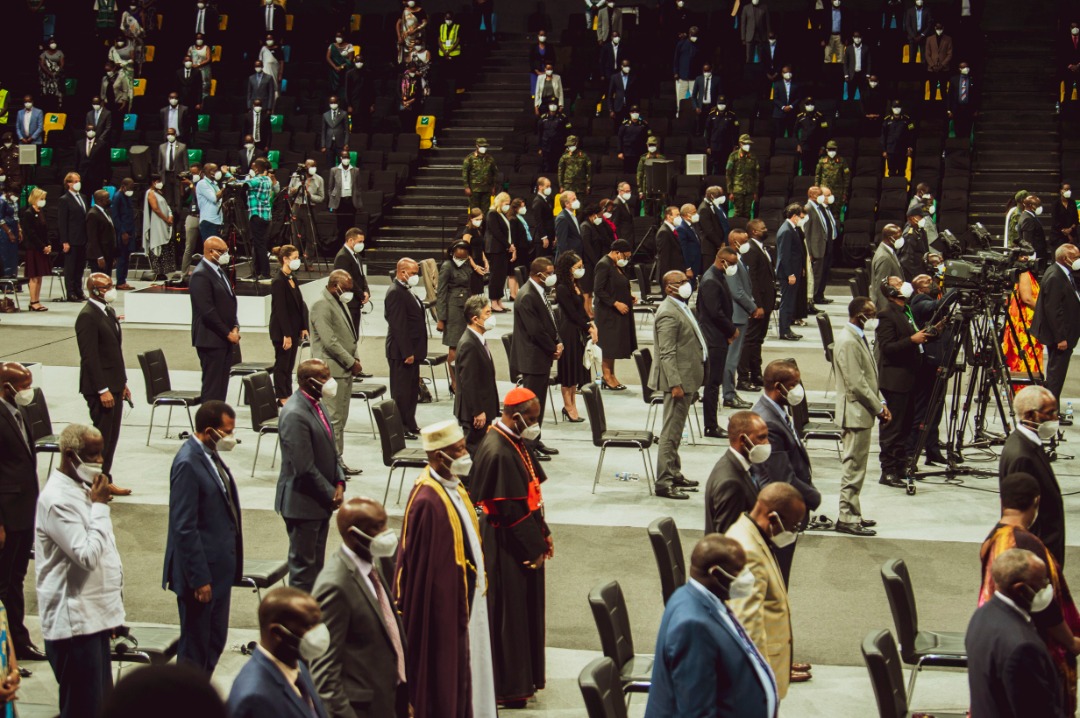 Look, even if you thought those were the facts, how does this stop you from isolating this case and treating it the way it should be treated? And then you can come up with your own list of other,” he said questioning the agenda and logic behind it.

President Kagame said that when the said genocide suspects are granted safe haven and extradition requests are refused, it has a direct consequence, among them the recent massive increase in genocide denial and revisionism, which he said will take years to reverse.

“Well-known publishers release books accusing the RPF itself of having masterminded the genocide in order to take power. What is even more disturbing, is that too many people who know better prefer to stay out of it by keeping quiet,” President Kagame said.

President Kagame said that in the third week of April, Rwanda will release her own report which will also dwell on the role of the French, more like the Duclert Commission report.

Rwanda maintains that France played an active role in the genocide, particular the French military, which is accused of training and arming genocidal forces under President Juvenal Habyarimana’s government.

Relations between Rwanda and France have been tense for nearly three decades due to the French failure to acknowledge their role in the events in Rwanda pre-1994 and during the genocide against the Tutsi.