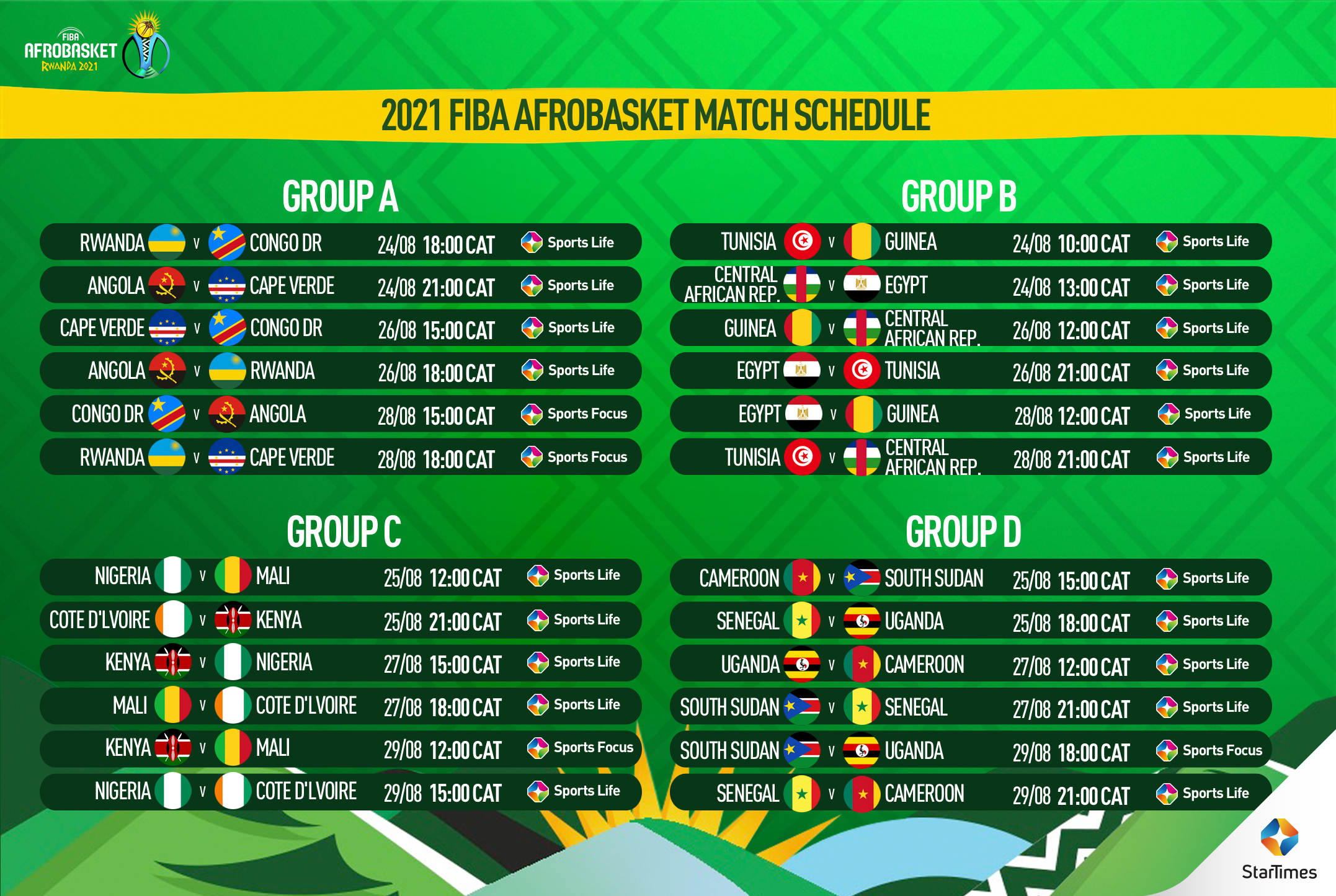 Nigeria go into the 30th FIBA AfroBasket competition that starts on August 24 in the Rwandan capital Kigali as the favourites to lift their second title. The competition is to be aired live and exclusively on the StarTimes channels.

D’Tigers, who were the continent’s sole representatives at the recent Tokyo Olympics, are expected to be the team to beat in the Kigali Arena.

Despite being eliminated in the group stage in Tokyo after losing all three matches, Nigerian basketball officials decided to stick with American coach Mike Brown.

The former LA Lakers head coach, who doubles up as the Nigerian coach with his role as assistant coach at the Golden State Warriors, said that he was keen to help Nigerian basketball grow.

“I’m going to get this programme headed in the right way because this programme can be really good. We hit a few speed bumps during this Olympics and it hurts.”

Brown can call on several players with plenty of experience, like Ike Diogu, Obi Emegano and Ike Iroegbu, as well as forward Jordan Nwora, who was crowned NBA champion with the Milwaukee Bucks last month.

The West Africans have been drawn into Group C, where they will face Mali, Kenya and Ivory Coast.

The team that beat D’Tigers in the final of the 2017 tournament, Tunisia, are one of just three teams – the others being Egypt and Nigeria – not to lose a match in the qualifiers.

They are up against Egypt, Guinea and the Central African Republic in Group B, with the top two teams from each group advancing to the quarter-finals.

But while they might have a new face on the bench, much of the team will have plenty of AfroBasket experience, with half of the squad that won the first title for the country in 2011, expected to be in the squad in Kigali.

For players like Mourad El Mabrouk (34), Salah Mejri (35), Slimane Radhouane (41), and Mohamed Hadidane (35), this could well be a last attempt to win another title.

Group A at the August 24 – September 5 tournament sees Angola, who disappointed at the last tournament, when they finished seventh, face Rwanda, Cape Verde and DR Congo.

2017 was the first time since 1981 that the 11-time champions, who long dominated the sport in Africa, did not finish in one of the top three positions.

One of the players who could be making his AfroBasket debut for Angola, is 31-year-old Jone Pedro. The son of former international Adriano Baiao said that – contrary to what many people think – Group A is not that easy.

“So the best we can do as a team is to be as prepared as possible for everything. In regards to my personal goals, I intend to be the best version of myself.”

In shooting guard Brancou Badio, who plays for FC Barcelona, Senegal have one of the rising stars of African basketball. Former NBA player Boniface Ndong, who was appointed Senegalese head coach last year, said he is looking forward to working with Badio.

“At 21 years of age, he is the kind of player that we really need. A young Senegalese guard playing for one of the biggest teams in the EuroLeague. I am going to help him grow.

“Maybe he doesn’t have much responsibility at Barcelona but I will give him some in our national team because the faster he grows, the better for us.”

Basketball fans throughout Africa will be able to watch all the action from this year’s AfroBasket tournament live and exclusively on the StarTimes channels ST Sports Life and ST Sports Focus.

StarTimes is the leading digital TV operator in Africa, serving 13 million DVB subscribers and 27 million OTT users in 30+ countries. StarTimes owns a 700+ channels’ content platform combining African local channels (75%) and international channels (25%, including Chinese channels 1.5%). The company’s vision is “To ensure that every African family can access, afford, watch and share the beauty of digital TV”.

Ruling in the Trial of Rusesabagina and Co. Due In One Month