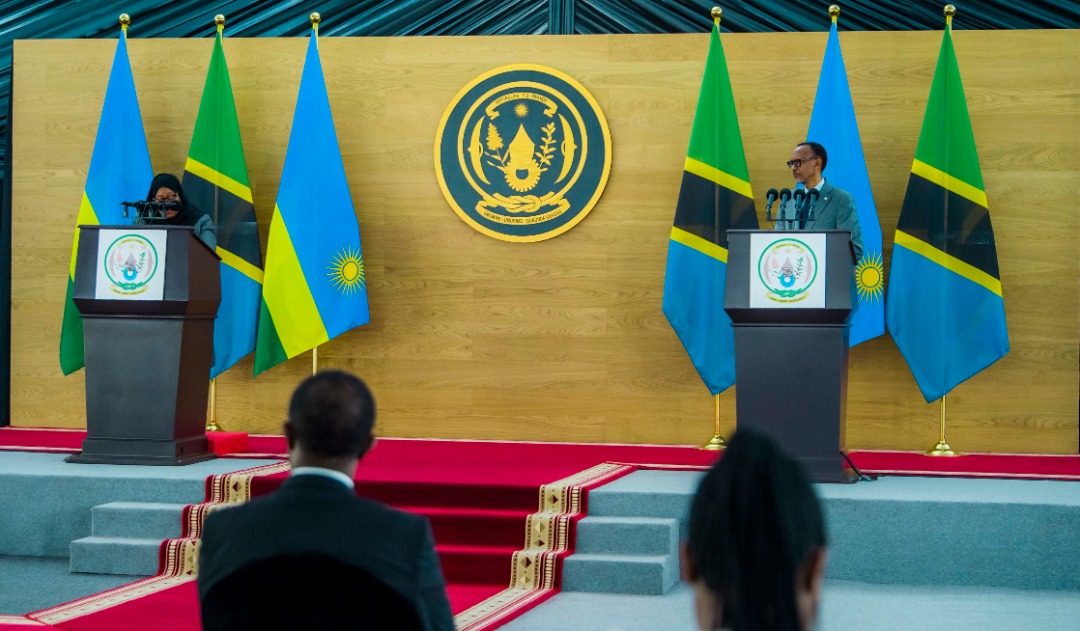 President Paul Kagame says Rwanda and Tanzania are united by much more than the border that separates the two countries but rather historical ties and shared aspirations that date many years back.

The Head of State made the observation on Monday, while addressing the press at Urugwiro Village with his Tanzanian counterpart, President Samia Suluhu Hassan who is in Rwanda on a two-day state visit. Prior to delivering statements, the two leaders held a a tête-à-tête which lasted for hours.

“Rwanda and Tanzania share more than just a border. Our strong historical ties, the common aspiration to deliver prosperity to our people, have always been central to our cooperation,” President Kagame said, describing President Suluhu as ‘my Sister’.

“With the signing of these agreements, we are committed to ensuring that this visit leads to tangible results and gives renewed momentum to our bilateral relationship. This also gives new impetus to key infrastructure and investment projects of mutual benefit, particularly, the standard gauge railway, milk production. and improved port logistics,” 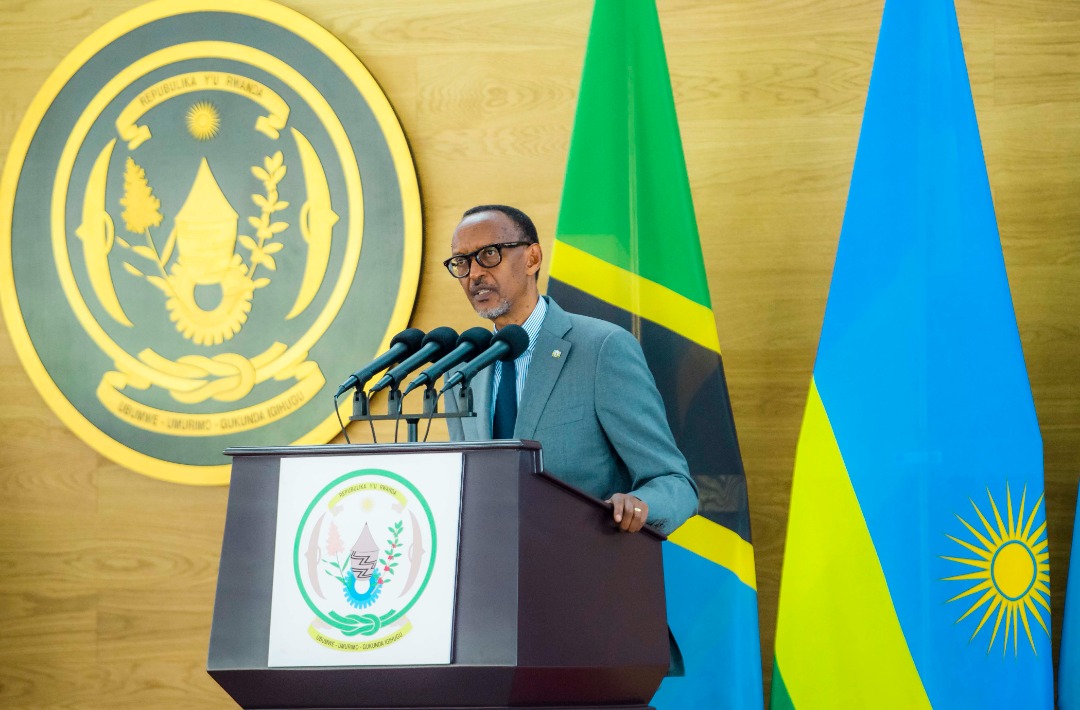 President Kagame says Rwanda and Tanzania share much more than a common border.

“Rwanda stands ready to work closely with our brothers and sisters in Tanzania, in the context of the East African Community and beyond to speed up our countries and regions’ recovery from the Covid-19 pandemic,”

President Kagame said that the challenges the region faces can only be addressed through unwavering solidarity and seizing the opportunities for mutually beneficial partnerships.

“I look forward, Madam President, to continuing to work together towards a stronger and more prosperous East African Community. President once again, I thank you for the honor of this visit, which I am sure Rwandans are also happy to learn about and witness as it happened today,” President Kagame said.

She pointed out that Rwandans are welcome in Tanzania and Tanzanians are welcome to Rwanda, as the two countries look to strengthen further the close ties. 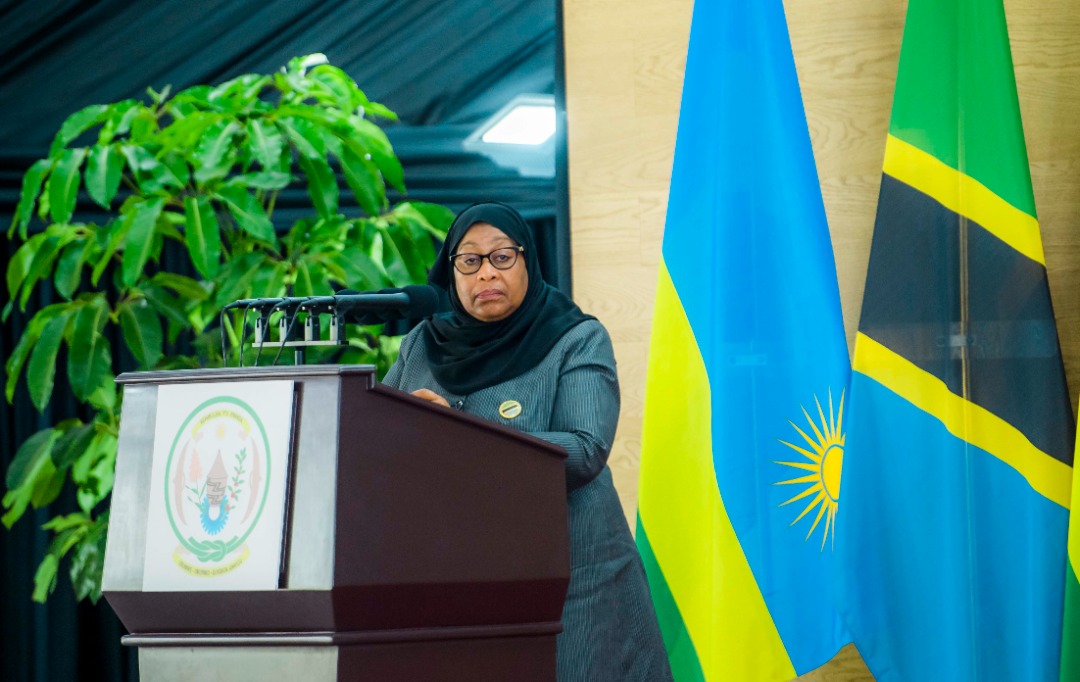 She thanked President Kagame and Rwandans for standing together with Tanzanians, following the untimely and shocking demise of President John Pombe Magufuli in March this year.

The Tanzanian Head of State said there is a lot more the two countries can learn from each other, in the spirit of strengthening trade ties, ensuring the prosperity and development of the economies and the people and the agreements signed on Monday, will pave way for that.

Among areas of cooperation she highlighted the need to jointly tackle the Covid-19 pandemic and also ensuring that the one stop border post of Rusumo is fully operational for the benefit of the two countries.

Prior to addressing the press, several bilateral agreements for cooperation were signed, including one signed by the Ministers in charge of ICT from the two countries who signed an agreement on cooperation in the field of information and communication Technologies.

President Samia Suluhu visited Kigali Genocide Memorial to pay respect to the over 250,000 victims of the 1994 Genocide against the Tutsi. Later on Monday evening, President Kagame will host the Tanzanian leader and her delegation to a State Banquet at the Kigali Convention Centre.”

Tomorrow Tuesday, President Kagame and President Suluhu Hassan will visit several companies in various sectors including the Kigali Special Economic Zone which is home to 120 companies with activities ranging from manufacturing, agro-processing and education among others. To date, the SEZ has generated 800 million USD in exports and created 13,000 jobs.

President Suluhu Hassan assumed office in March this year following the passing on of President Magufuli. 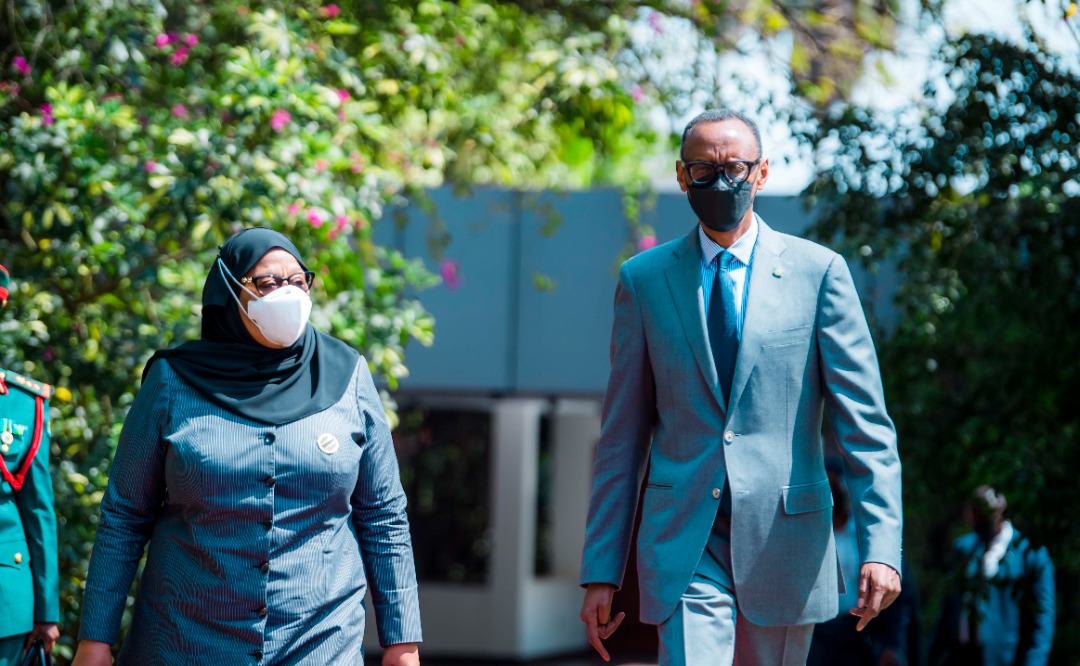 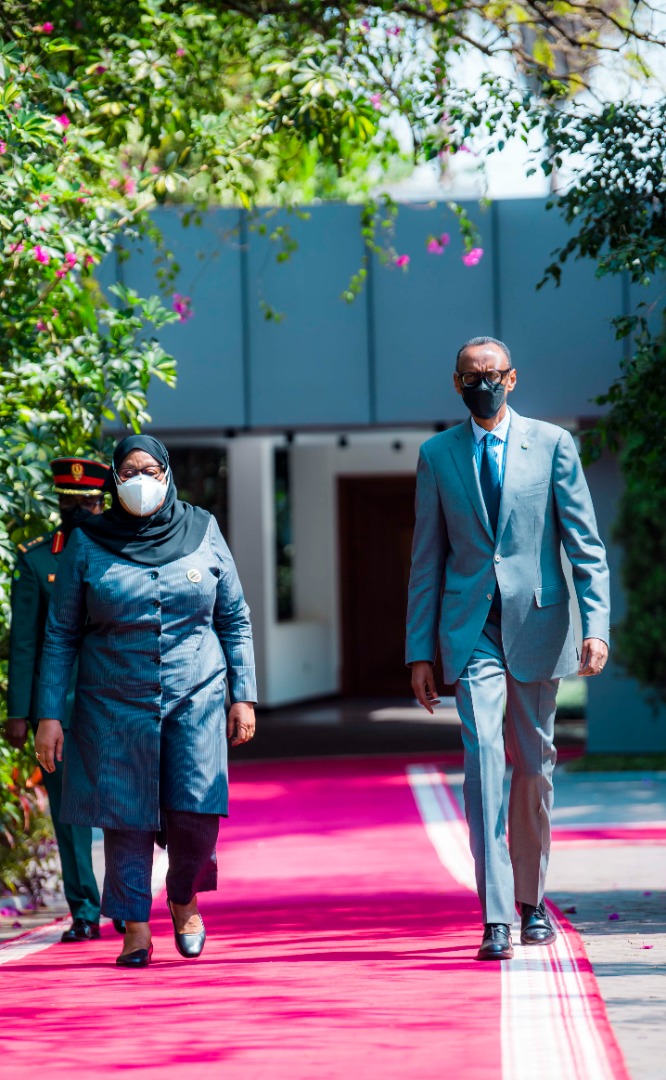 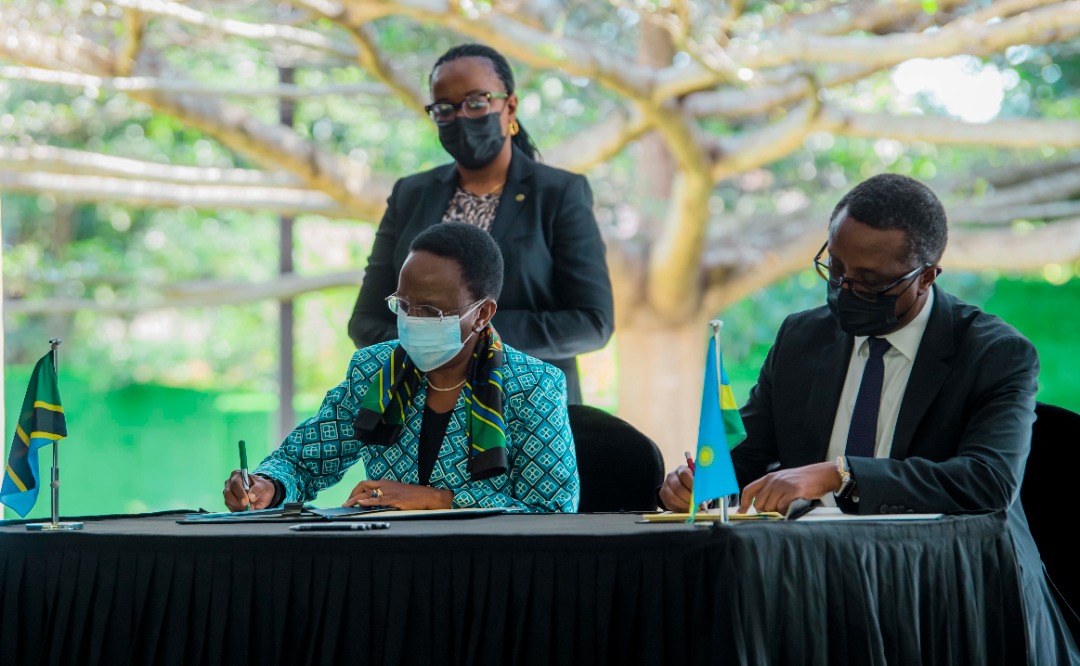 Is Imanishimwe Emmanuel Set to Become the Most Expensive Rwandan Player In History?