Home NewsNational On Your Bike: Guraride’s Ambition To Turn Rwanda Into A Cycling Nation
National

On Your Bike: Guraride’s Ambition To Turn Rwanda Into A Cycling Nation 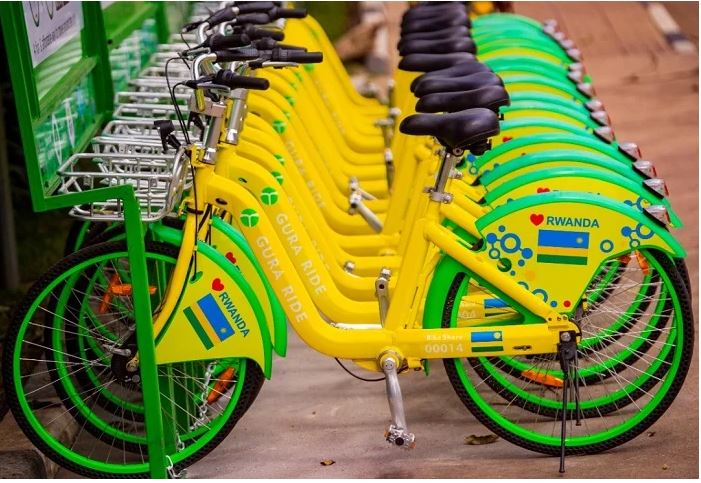 Rwanda’s capital of Kigali, is set to be among the first cities in Africa, to persuade people to choose a two wheel mode of transportation, but like most cities around the world with similar ambitions, the challenges are more uphill than freewheeling.

After four years of preparation, Guraride (literally, buy a ride), which styles itself as an e-mobility bikeshare transport system company, has patterned with the City of Kigali to launch a bicycle sharing, or park and ride scheme.

For the next two months, while the company discusses the pricing with its partners, anyone who works and lives in the city, will be able to use the bicycles free of charge.

“After years of hard work, I cannot believe this day is here” enthused the Company’s Vice President, Christella Niyonkuru.

The minister of infrastructure, Ambassador Claver Gatete, declared the bicycle scheme open, before symbolically cutting the ribbon that had been strung across one of the docking stations, outside Kigali City Hall.

“I call upon all citizens to embrace this initiative, and make the most of it” said the minister, in his remarks.

According to the minister, at a meeting in April of this year, the government committed to build the infrastructure, and to bring in necessary changes to enable anyone who wanted to cycle, walk, do so safely.

As new roads are built, especially in the cities and towns, they are given cycle lanes. But as other cities around the world are finding out, this is far from adequate to encourage a cycling culture. The challenging task of adapting old infrastructure to make them accessible, and safe for cycling, has to be embarked upon.

The minister was joined by the Mayor of Kigali, Pudence Rubingisa, and the Inspector-General of Rwanda National Police, Dan Munyuza, was represented by Assistant Commissioner of Police, Teddy Ruyenzi, who is also Deputy Commissioner for traffic and road safety.

Commissioner Ruyenzi, addressed a worry that will be on the mind of anyone thinking of cycling in Kigali: motorists for whom cyclists, not to say pedestrians, are a nuisance to be hooted at, but rarely given due regard.

“Research shows that these types of bicycles are many times less likely to be involved in accidents, than ordinary bicycles” she reassured. Perhaps the bright green and yellow colours, for increased visibility, may be a contributing factor to the research findings.

She added that for their own safety, cyclists are also reminded to adhere to traffic regulations, including obeying traffic lights.

There at the moment only two designated areas where the scheme will operate, the Central Business Centre and Remera-Kimironko. 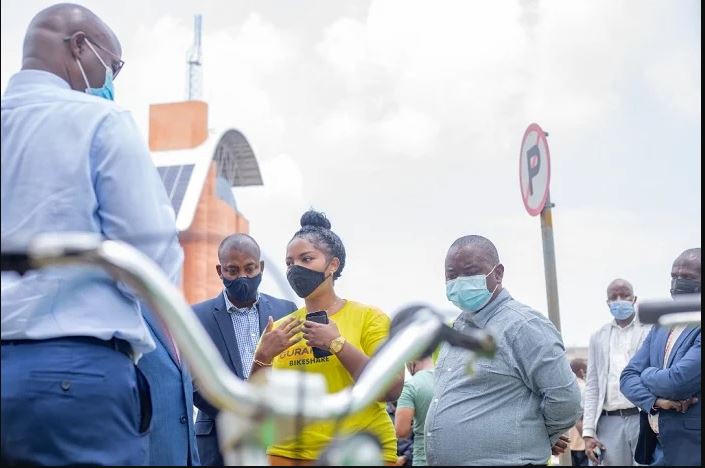 Over time however, Guraride plans to cover not only more of the city of Kigali, but to go nationwide.

Guraride bicycle parts are made in China, and assembled in Rwanda. There is a skills training programme for youth, especially young women, who are trained to maintain, and service the bicycles.

For anyone who might feel left out, because they never learnt to ride a bicycle, there are free cycling lessons, at Mudenge, Kibagabaga, every Saturday morning.

And if the very thought of cycling in the “land of a thousand hills” makes your legs turn to jelly, fear not. As they extend the scheme, Guraride will be introducing e-bicycles, to give you a push, up those hills.

The company aims to create green job opportunities, contribute to the reduction of carbon emissions, “overhaul car dependency” and improve standards of health through cycling.

Quite an ambition, but if they can maintain the enthusiasm and razzmatazz with which they have begun, they are certainly not lacking the support to meet their high ambition.

As well as support from the City of Kigali, and as the scheme expands, other towns, cities and districts in Rwanda, there is a mooted collaboration with UN Habitat, the European Union, and Solutionsplus Project, which promotes public and commercial e-mobility innovations.

With this first step, Guraride has 80 bicycles, at 12 docking stations.

With the Tour de Rwanda, now poised to be recognised as one of the world’s major venues for the sport of cycling, if, or when Guraride rises to its ambition, it can complement, or even rival the tour, in turning Rwanda, into a truly cycling nation.