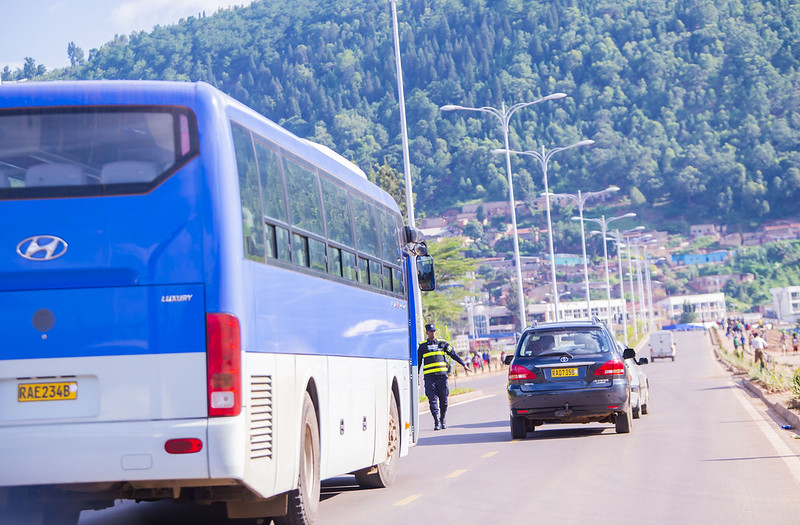 Since last week, some drivers  said they were stopped by traffic police to check their status in compliance with traffic rules.

Testimonies from drivers have it that, traffic police officers surprised them while saying that cameras registered their vehicle’s number plate while overspeeding.

In 2019, with the introduction of speed cameras (on streets of Kigali and provinces), commonly known as ‘Sophia’- attributing the name to the first ‘human-like’ robot that spoke at Kigali Convention Centre in 2018, the fining system has been done electronically with the vehicle owner receiving a message indicating the fine.

The Sophias, which are visible on the roadside or between lanes, have also been followed by other mobile speed cameras.

A Rwf25,000 fine is levied on each violation, which means several fines can be registered in a day if a driver is not careful.

Violating speed limit means  going over the speed limit of 40 or 60Kilometers per hour (kph) respectively as indicates by a sign post.

All was going well until recently when the procedure saw controversy between police and drivers as the latter claim that the cameras fine them ‘unfairly’ for exceeding required speed limits yet they didn’t.

Drivers argue that the fine recorded against their vehicles do not correspond to the speed limit sign posts.

“How does one explain a situation where one is driving at below the speed limit of 60Kmph but the camera goes ahead to shot and fine you?,” one driver Nsengimana asked.

“Somehow this makes one wonder if the cameras settings are the problem and need to be set properly or it is an intentional trap for drivers,” another drivers wondered.

In the midst of growing complaints, driver said to have heard a message according to which all drivers going beyond speed limit of 40kmph in Kigali will be fined.

On the other side however, Police says that drivers are only bringing excuses.

“People want to drive the same way they have been doing 20 years ago. They should refrain from this old perspective, and follow emerging technologies including speed limit signposts and road cameras,” Police Spokesman, CP John Bosco Kabera said.

Drivers claim that they don’t have any issue with the speed cameras but they file objections on rules and penalties related.

“We respect the police as a law enforcement organ but these changes should have come along with changing all speed sign posts towards the new changes so as to avoid this confusion to give us an opportunity to adjust,” a bus driver said.

This driver along with others say that these changes should come with integrating the already existing speed governor infrastructure as a tool to control over speeding.

Drivers who spoke to KTPress suggested that there is need to have proper road infrastructure which can accommodate the new road traffic rules while always thinking about easing mobility in a very busy city.

“We have already started seeing some inconveniences of new speed limits in Kigali where traffic jam has increased overnight. You can imagine driving a tourist to the airport for two hours in this jam,” one taxi driver said.

Citizens say that the other solution will be to have a real time data platform to monitor real time performance of cars in case of any technical problems in the cameras and machines used in the traffic system. For example if the computer fails to disseminate or read the right data.

In February 2020, Rwanda signed a deal with Vitronic, a firm based in the United Arab Emirates (UAE), to help improve road safety.

The agreement included to install over 500 German high-tech road safety systems across the country. The system, among others, included establishment of mobile, fixed cameras and trailer light bars used to monitor speed and traffic violations in the city.

According to the National Police, installation of the speed cameras aimed at reducing accidents mostly in hotspots nationwide by 80%.

Along with these cameras in Kigali especially, speed limit signposts were planted depending on the population and major infrastructures including schools, hospitals, markets, among others.

In urban areas, speed limit signposts are fixed at 40kilometers/per hour, and rural areas 60kilometers/hour, but in some neighborhoods the speed could be as low as 30km/hour.

However, in some urban and highly populated areas, speed limits were limited to 30kilomeres/hour. According to police, the idea was to prevent road accidents in the city.

“We believe that these systems will go a long way in ensuring safety on our roads for healthy and productive citizens. Rwanda’s plans for extending its success in road safety have always included further reinforcements including monitoring systems, more public awareness on accident prevention and enforcing good road conduct,” Kabera said.

Speaking at KT Radio this evening, police officials said that cameras have made a great impact in reducing accidents.

“The cameras have reduced accidents by 88 people in every 10 months which is a big thing,” said ACP Gerald Mpayimana of Traffic Police.

“Also to note, is that huge accidents are no longer happening.”

He mentioned the case of Bishenyi, Shyorongi and Musha which claimed big numbers.

“Today, accidents may claim just one person, not two. They are mainly motorcycle accidents.”

Moreover, police reminded that cameras only came to enforce road safety, “not to increase police charges and money as many claim.”

Andre Glomyco, a traffic road said, that “some people just drive without paying attention to sign post on one side, but on another side, sign posts have quite several gaps.”

On hiding cameras, Glomyco said: “a student who does not cheat in exams does not complain about surveillance.”

Miss Rwanda 2021 On Mission To Represent Country In Miss World