Thousand Hills won the Big Ant Studios Rugby Sevens Series after beating the Kigali Sharks by 28 points to 7,  Muhanga Thunders crowned too the trophy after drawing 5-5 with Resilience but they lost on the coin chance.

The one-day tournament, which was held at Amahoro Stadium, attracted 14 teams including eight men’s teams and six that competed in the women’s category. 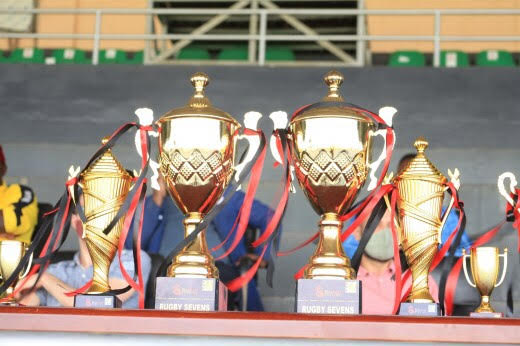 The competition saw teams pooled into two groups with the top two teams from each group in men’s category going through to the semifinals while the first teams from each of women’s groups went straight to the final after a round robin group stage.

In the men’s semifinals, Kigali Sharks beat Rubavu Eagles 21-7 to set a final date with 1000 Hills who eliminated Resilience RC 7-0 in another semi-final.

1000 Hills went on to win the  men’s Sevens tournament after a convincing 28-7 victory over Kigali Sharks as Muhanga Thunders who topped Group A overcame Resilience WRC after drawing 5-5 but they lost on the coin chance.

The most valuable player presented Isimbi Carlos, a Thousand Hills player, and Odette Ndayishimiye, a Resilience player. The FairPlay team of the tournament got to Rwamagana Campus team.