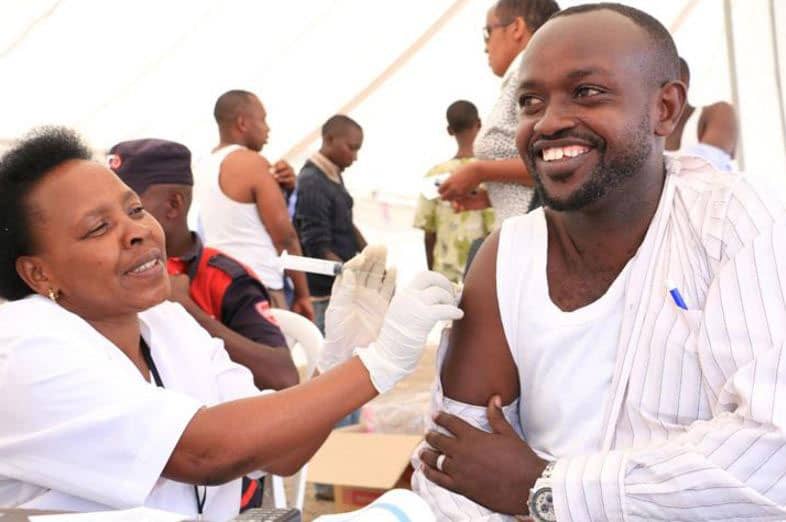 Vaccination against Hepatitis in Kigali

Rwanda has been named among Africa countries which are making good progress in providing treatment and screening with the country recording over 86 percent of the population getting free healthcare.

Chronic and viral hepatitis B and C primarily affect the liver with over 70 million people on the African continent suffering from the disease considered as a silent killer because the diseases develop slowly over many years and most patients do not have symptoms.

Experts say that awareness and education efforts remain critical factors in driving early diagnosis and treatment and one of the examples has been noticed in Rwanda.

During an online roundtable meeting organized by Abbott, a leading global healthcare provider, this Friday 22, 2022 data presented showed that some countries, including Rwanda, Uganda and Egypt, among others continue to show positive progress in the elimination of those viral diseases.

In Rwanda, the earliest prevalence of the viral hepatitis (HBV & HCV) was 2% of the population when the country’s Hepatitis program commenced in July of 2016, with people aged 55 and above accounting for 16% of infections.

This initiative yielded positive results in the fight towards eliminating HBV and HCV; substantially improving the affordability of screening tests, with an increase in demand for the tests.

The government also negotiated breakthrough deals that reduced the costs of rapid testing by large margins; dropping from $113 million to $43 million and ensuring that treatment in the country is readily accessible to everyone in need of care.

In 2018, under the support of the First Lady Jeannette Kagame, Rwanda launched an ambitious agenda to provide free healthcare for hepatitis patients (15 years above) with a target of 7 million to be screened by 2021.

Data presented by Dr. Janvier Serumondo, the Director of Sexually Transmitted Infections and Viral Hepatitis Unity at Rwanda Biomedical Centre (RBC) showed that so far over six million Rwandans have been screened (representing 85.7%) of the target.

Of these 129,549 were screened positive and 54,518 initiated on treatment in the 560 facilities countrywide- which also has radically dropped in cost of care from $3,000 in 2014 to $60 as of 2019 under the country based hepatitis elimination program which involved soliciting support.

“This has been achieved as a result of the government’s focus on elimination of hepatitis through offering free treatment but the government was also engaged in negotiating funding for the program to have reduced prices for treatment,” Serumondo said.

Serumondo said that to roll out the program (from 2020 onwards), government has set focus on decentralization approach with task-shifting of HCV service delivery at the lower levels

Hepatitis B is preventable via a vaccine but there is no vaccine for hepatitis C, although treatments today are very effective.

Considering that Rwanda is one of the countries planning to soon start manufacturing Covid19 and Malaria vaccines for Africa, Serumondo said that the hepatitis vaccine has not been tabled on the current list of vaccines but it would essentially be of value.

The World Health Organization has provided a roadmap for the elimination of viral hepatitis B and C as a public health problem by 2030 – which includes a 90% reduction in incidence and a 65% reduction in mortality by 2030, compared with a 2015 baseline.

The WHO says testing and diagnosis provides an opportunity for interventions that include early treatment, reduced transmission and counseling on risk behaviors.

“Early screening followed by adequate treatment is paramount for better health outcomes for patients and more effort must be deployed in that regard,” said Dr. Kuku Appiah, Medical Director for Abbott’s rapid diagnostic business in Africa.

“At Abbott, we have been partnering with governments and leading hepatitis programs across Africa to support surveillance programs and provide reliable and affordable rapid diagnostic solutions to help governments meet their health targets for hepatitis, among other diseases.”

Abbott which has supported Rwanda to get treatment for non-communicable diseases (NCDs) like Diabetes- which include 2000 free style optium Neo glucose meters and 11.7 million free style optium test strips donated in 2020 said that they are willing to support Rwanda considering its track record in providing healthcare for all.

National League Round Up: APR Remain Top in Title Race After Narrow Win over Marines