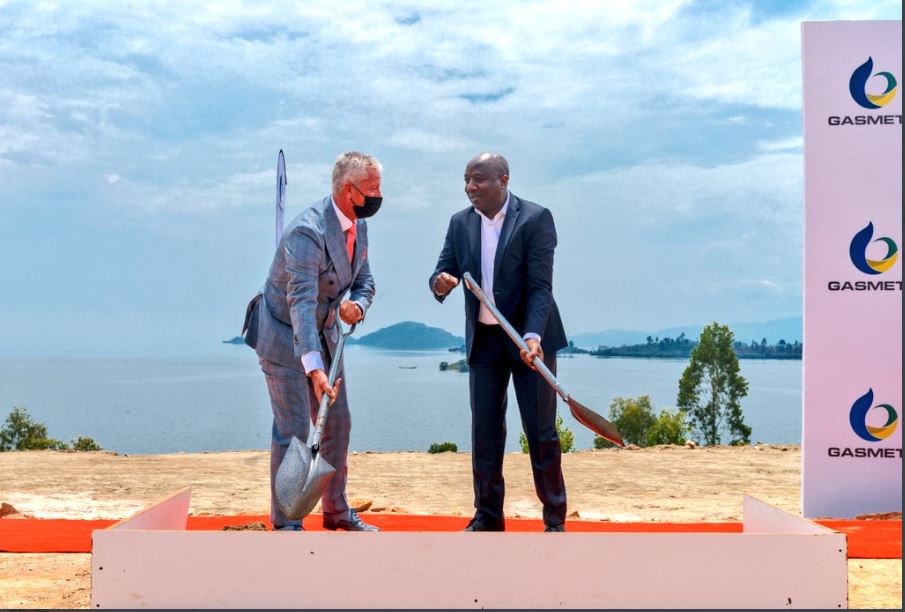 Rwanda’s Prime Minister Edouard Ngirente today launched construction of  compressed natural gas plant in Bwishyura, Karongi district located on the shore of Lake Kivu. It is estimated to cost $530Million to be financed by AfreximBank.

The project will be implemented by GASMETH, an international company which specialises in funding gas development projects, design technical and operational capability to construct and deliver gas projects in efficient , safe and environmentally sustainable way among others.

In February 2019, Rwanda inked a $400 million deal with Gasmeth Energy to extract and process methane into Compressed Natural Gas (CNG) for cooking, industrial use and vehicles.

However, it was delayed by various factors, including the outbreak of Covid-19 pandemic.

The project involves construction of an offshore gas extraction facility along with onshore gas processing and compression plants for CNG.

It could serve 300-400,000 households who currently depend on wood fuel for cooking.

A total investment of $1.37 billion is needed by 2030 to achieve such a government’s target of reducing charcoal.

The investment valued at $400 million (approximately Rwf358bn) investment is projected to create employment for between 600-800 people during the construction phase and 400 employees after construction.

Gasmeth Energy Ltd was awarded a 25-year Concession Agreement by the Government of Rwanda to extract methane gas from the deep, Methane-rich waters of Lake Kivu in Karongi district, Western Province.

CEO Stephen Tierney said that after two years of soliciting funding partners, they are excited to move to the next phase of the project.

“This is one step closer to realizing our plan for supply of a cleaner self-sufficient energy source for Rwandans,” Tierney said.

It includes producing the gas (held in solution in the water), processing it on barges tethered in the lake, piping it to shore, compressing it, and distributing it as Compressed Natural Gas (“CNG”) within Rwanda.

The CNG will replace other fuels on the market such as; gasoline, diesel fuel, peat, coal, wood and LPG.

The gas will be used primarily in Rwanda’s transportation, industrial, household, and power generation sectors and, eventually, for export.

PM Ngirente welcomed the investment and said the plant is expected to provide a new energy source for domestic use.

“Indeed, projects and partnerships like these play an important role in our journey towards domestic energy security,” Ngirente said.

Contour Global’s KivuWatt Project currently produces 26.4 MW with plans to produce 100 MW during its second phase of work, while US-based Symbion Power owns two plants all of which are located at the shores of Lake Kivu.

The Kivu 56 project, on the other hand, is planned to supply 56 MW of power into Rwanda’s grid under a 25-year concession. It plans to generate 56 MW of power.

The methane in Lake Kivu is estimated to have capacity to generate 700 MW of electricity over a period of 55 years.