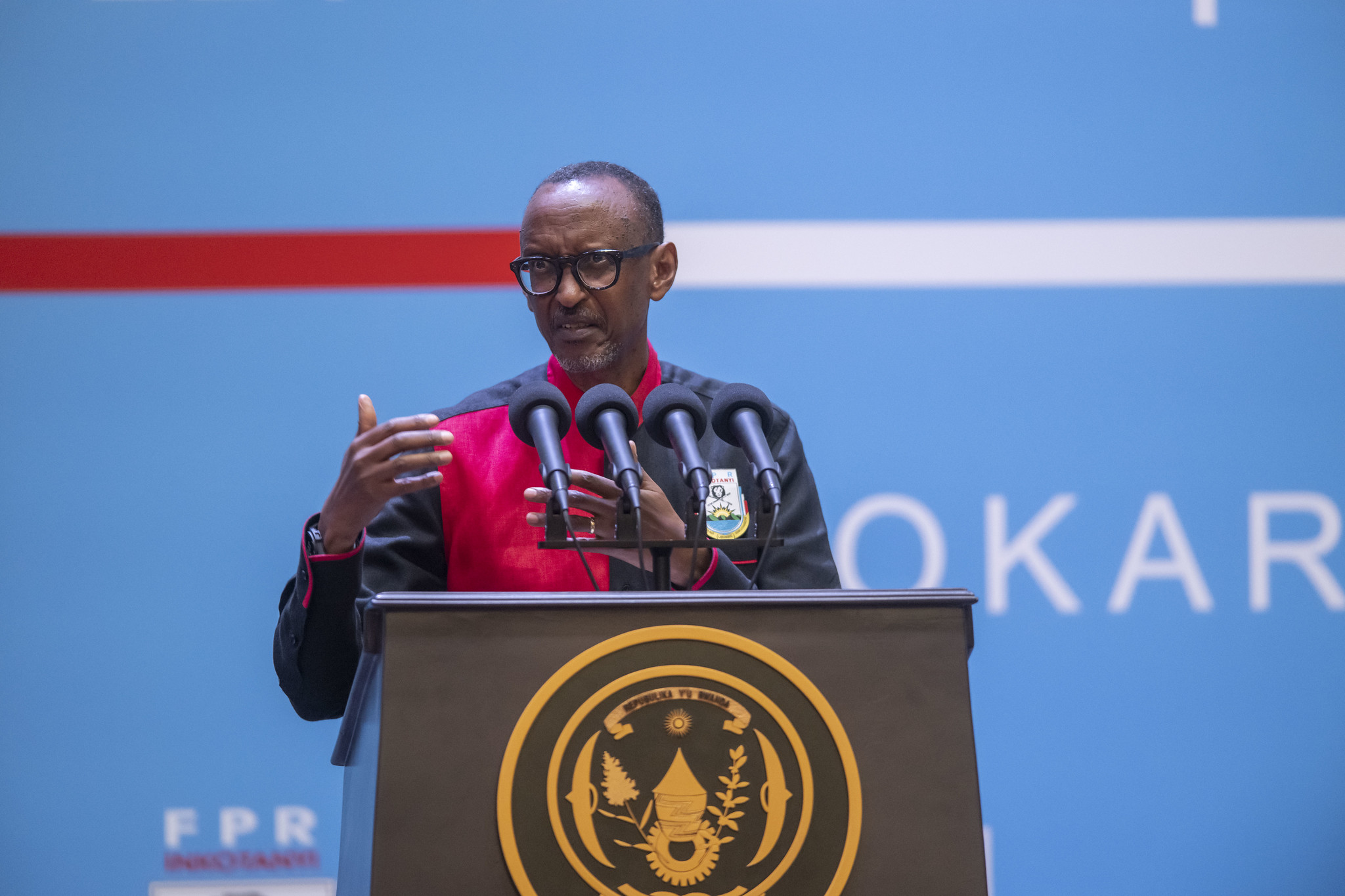 President Paul Kagame has urged leaders at all levels of governance to be deliberate in their actions and focus on serving the interests of the people, instead of their own.

The Head of State, who is also the chairman of the ruling party, Rwandan Patriotic Front (RPF-Inkotanyi), made the call on Saturday at the end of the two-day political bureau meeting that brought together over 2,000 party members and invited guests from other political parties as well as representatives of religious organizations.

President Kagame, who for the two days emphasised the need for efficient leadership said that leaders must serve the interests of the people, pointing out that when leaders don’t do what they are supposed to do, citizens pay the price.

He pointed out that the reason leaders are few among many citizens is simply because they are supposed to take the lead and cannot divert from that.

“Leadership is not a myth or an empty word….it is not something you pay money to get. If it was that easy, all of us would be leaders,”

“Leadership is inside you and you have to make a choice. A choice of what you do, your conduct and other characters that make you a leader. The result of that is the quality of your actions, actions that are measurable,” President Kagame said. 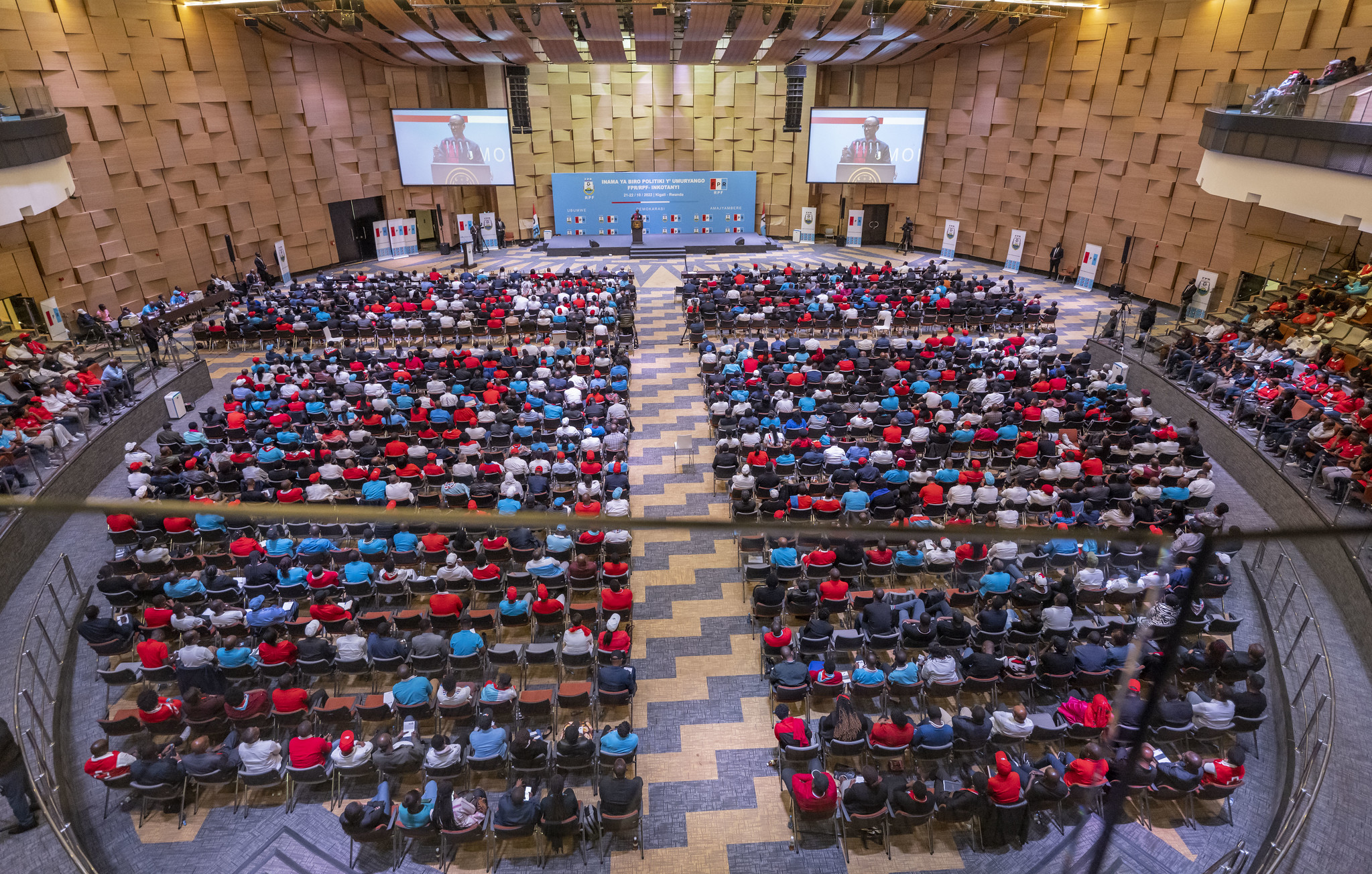 He pointed out that leadership is a choice one deliberately makes and works upon improving, to do better in whatever they do, to impact the lives of the people they serve.

The Head of State said that while the government has in place mechanisms to hold leaders accountable and keep them in check, it is upon individual leaders to do the right thing instead of waiting to be corrected all the time.

“We are seeing cases where someone does something wrong and they try to defend it or to convince you that they were just trying to help,” President Kagame said, in reference to cases of leaders using their positions to peddle influence based on cases that had been highlighted.

“I have no problem with that but if you repeat the same mistake tomorrow and then you do it over and over again, then I believe the explanations run out and you just become a problem to us,” President Kagame said. 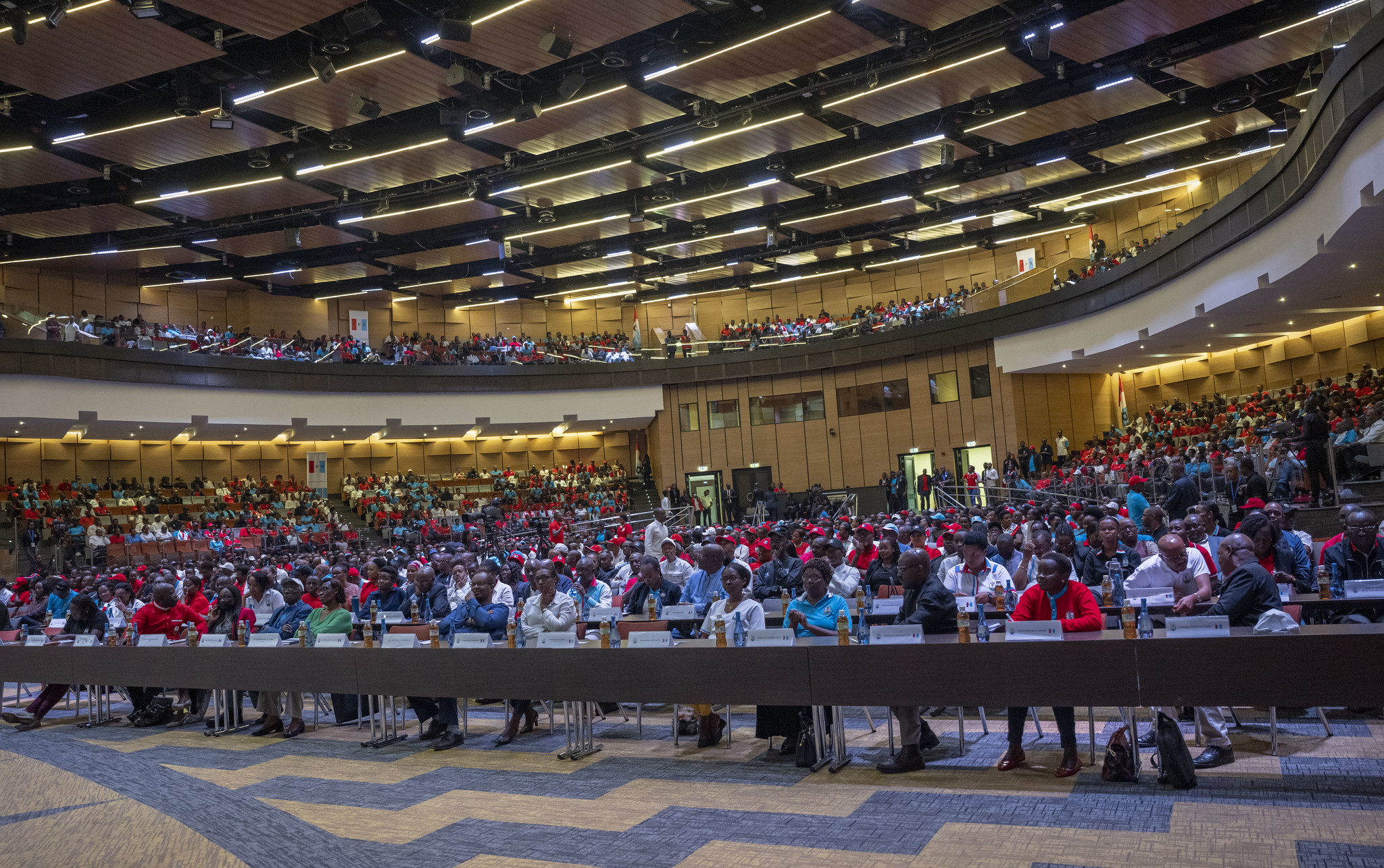 President Kagame said that using one’s position to serve individual interests becomes a big challenge most especially when those surrounding the leaders keep silent or act indifferent and allow the vice to go on.

“Leadership is all about regulation and doing things right. You don’t have the luxury of doing things in your interest while hurting others. When you do the right thing, you also benefit and the people benefit,” he added.

President Kagame cautioned against lukewarm leadership, where people take up positions but don’t have the resolve and drive to get things done, stating that leaders must be proactive.

“We want proactive leaders, not lukewarm leaders. You are neither here nor there, this doesn’t help anybody. If what you do as a leader is not impacting people, then you are doing it wrong,” President Kagame said.

He urged leaders to be proactive and vibrant so that they want to see the results of their actions and the contribution towards the country’s ambitions. 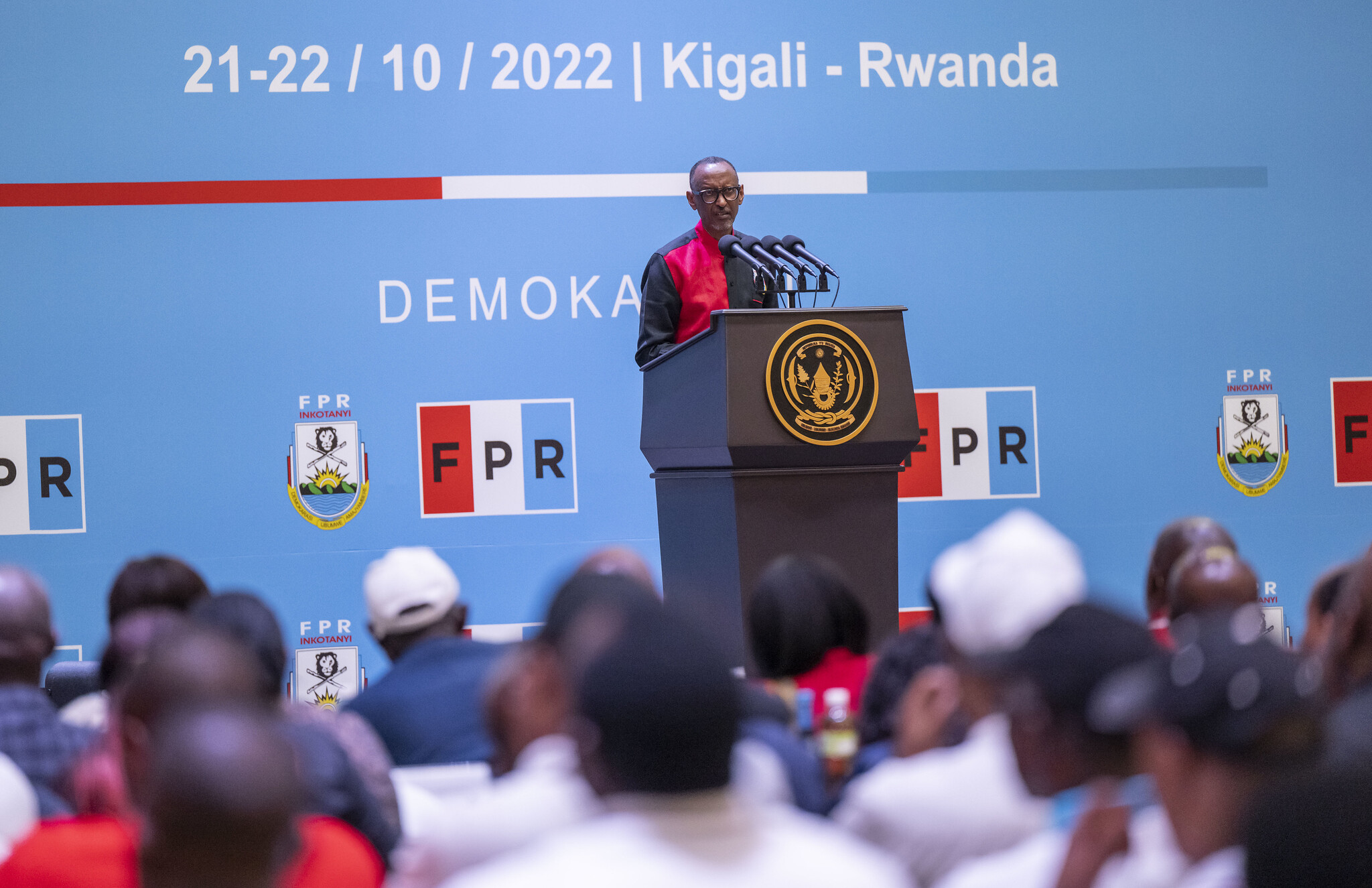 These skills and qualities cannot be obtained from school according to President Kagame, who said that leadership goes beyond what is taught in class and looks at character, conduct and the drive.

He called on party cadres and other leaders to be transformative in their actions and focus on doing things that improve the lives of Rwandans in a tangible way.

“We have to do away with bad habits of lying, being on the defensive and engaging in wrong practices such as corruption. Those are not qualities of a leader,” he said.

On day two of the RPF political bureau meeting during a panel discussion, the Minister of Finance and Economic Planning, Dr. Uzziel Ndagijimana made a presentation on the state of the economy, recovery and ambitions ahead.

Dr. Ndagijimana highlighted different efforts the government has put in place to resuscitate and cushion the economy from the after-effects of the Covid-19 pandemic and the ongoing Russia-Ukraine conflict. 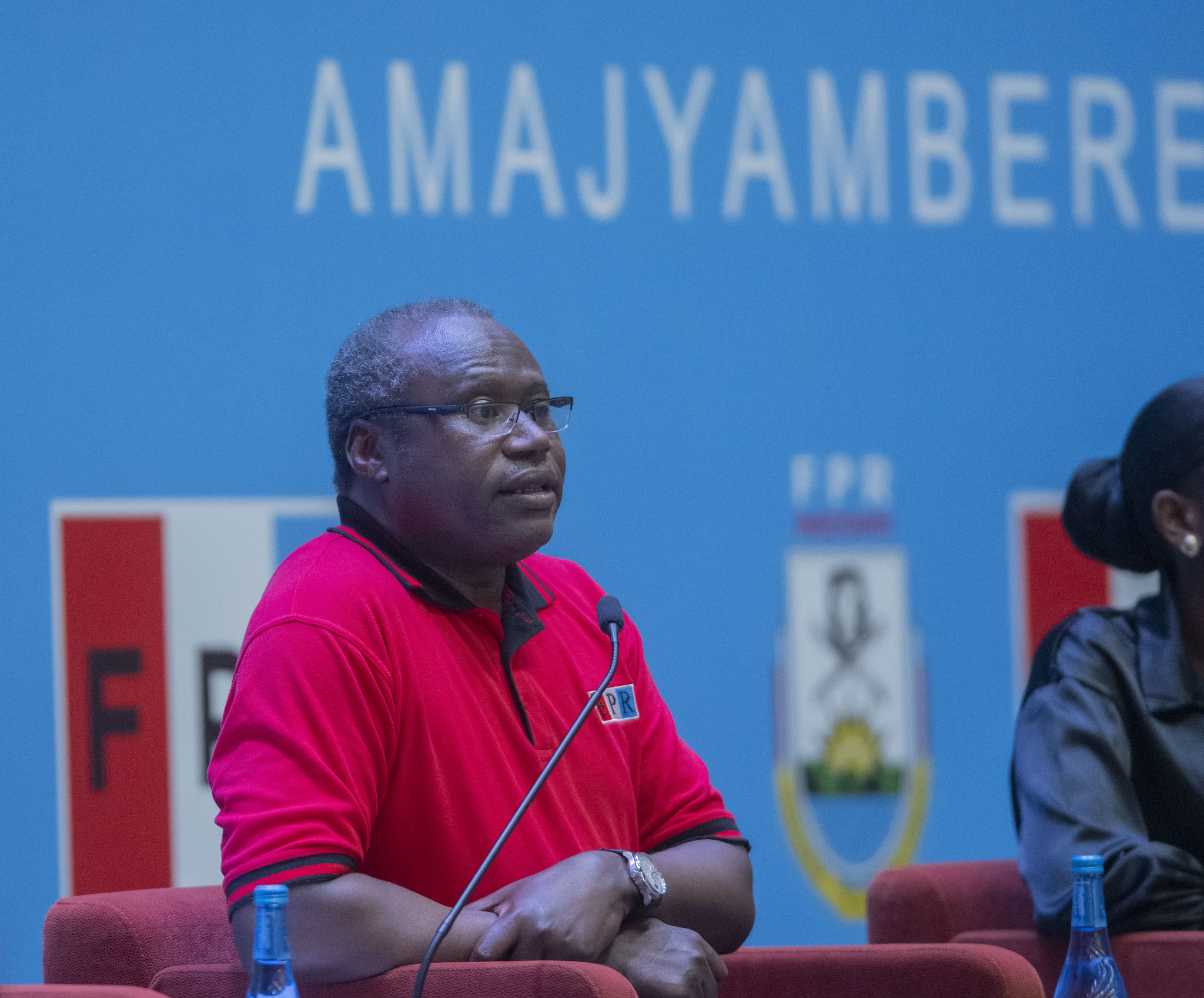 Minister Ndagijimana shed light on efforts to fully revive the economy and momentum to deal with global challenges.

He pointed out that over the past couple of years the government has had to chip in in terms of putting in place subsidies on fuel and public transport to slow down inflation and safeguard the economy from the devastating effects.

On the same panel, the Minister of State for Agriculture, Dr. Ildephonse Musafili spoke about some of the initiatives the government is working on to ensure sustainable agriculture productivity to address soaring food prices and boost food security.

Our plan is to have strategic reserves that can accommodate 100,000 tonnes of produce which can not only cushion the country against food insecurity but also stabilise the sector because people won’t be selling crops cheaply during bumper harvest,” Dr. Musafili said.

On the challenge of fertilizers, Dr. Musafili said a local solution is being sought where a fertilizer blending plant is under construction in Bugesera district while the long-term plan is to turn the urea found into the methane gas in Lake Kivu into fertilizers. 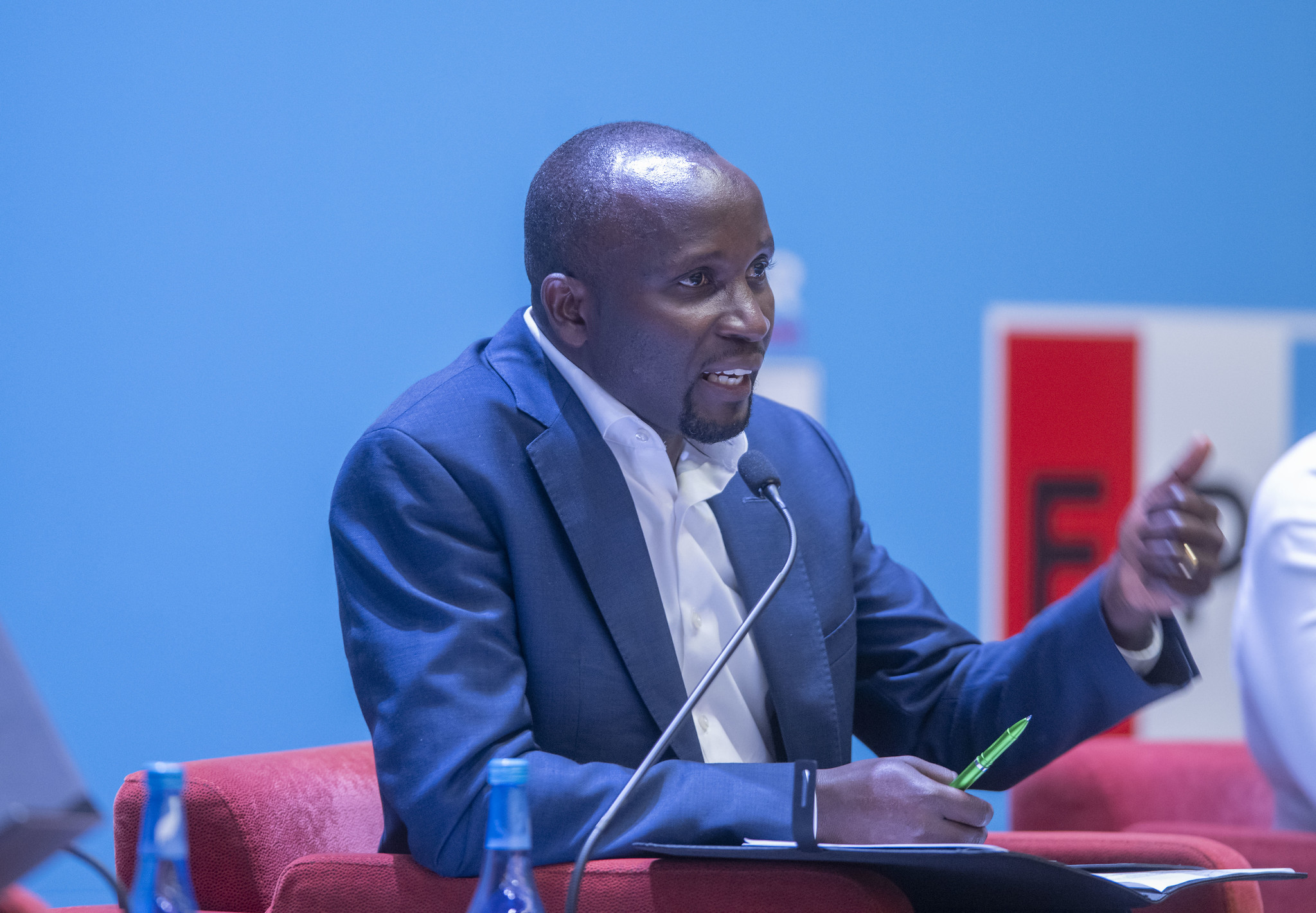 Dr. Musafili said agriculture should be at the core of everything Rwanda is doing to cushion the economy from shocks.

The Minister of State in charge of Social Affairs in the Ministry of Local Government, Assumpta Ingabire discussed some of the efforts being directed towards ensuring a good upbringing of Rwandan children in befitting conditions.

“It takes a community to raise a child. We need to go back to the point where a parent will meet a child in the neighbourhood and ask them why they are not in school. Teachers too must play their role in curbing school dropout,”

“We are working on a social registry that will help us identify the most vulnerable in communities and use it to track the progress on how people graduate from poverty,” Ingabire said, highlighting some of the social protection programs making a difference in society. 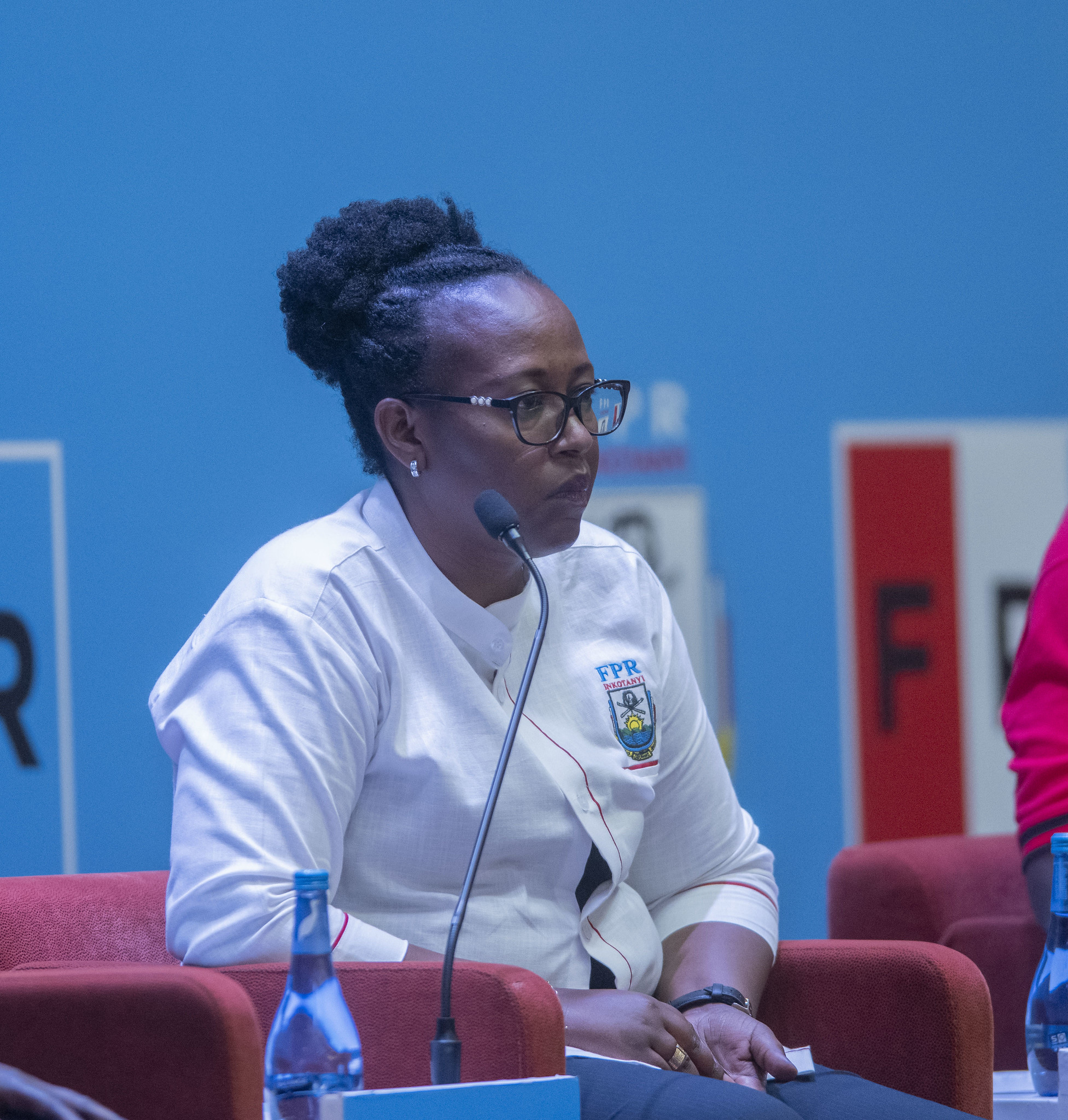 State Minister Ingabire discussed some of the key social interventions Rwanda is implementing to safeguard the society down to households.

Rwanda’s Ambassador to the U.S, Mathilde Mukantabana spoke about Rwanda’s steadfast foreign policy which puts the country first, despite constant ‘bullying’ from critics and today Rwanda is a brand everyone wants to associate with.

Amb. Mukantabana pointed out the role of Rwanda’s diaspora in projecting the country’s image and defying naysayers in the face of unfounded attacks levelled against Rwanda but truth always prevails.

She pointed out that President Kagame has singlehandedly worked to put Rwanda on the map and continues to be the number one diplomat, taking Rwanda to the world.

“Diplomacy is a collective undertaking not just for diplomats and our experience is testimony to that. However, our work has been made easy by the resolve of our leadership led by Chairman Kagame. We have earned respect in the international arena,” Amb. Mukantabana said. 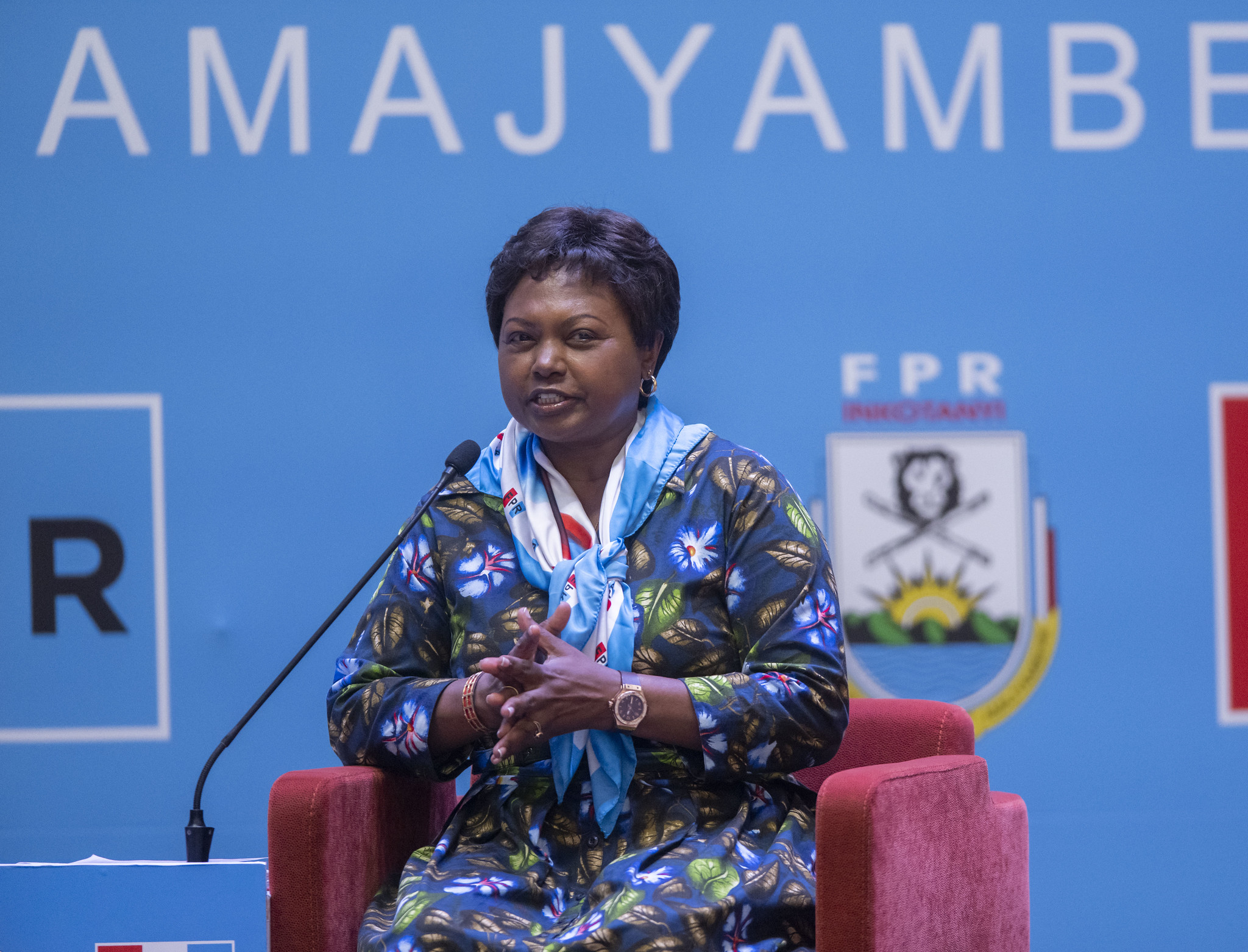 Amb. Mukantabana said that Rwandans wherever they are can be good ambassadors of the country.

Diane Cyuzuzo, co-founder and CEO of Afriduino, represented the youth on the panel, highlighting the opportunities young people have in Rwanda, to be part of the development process.

The 2021 Hanga Pitch Fest winner called on young people to have the drive and impetus to do things that not only bring them revenue but also contribute to the transformation of the country. 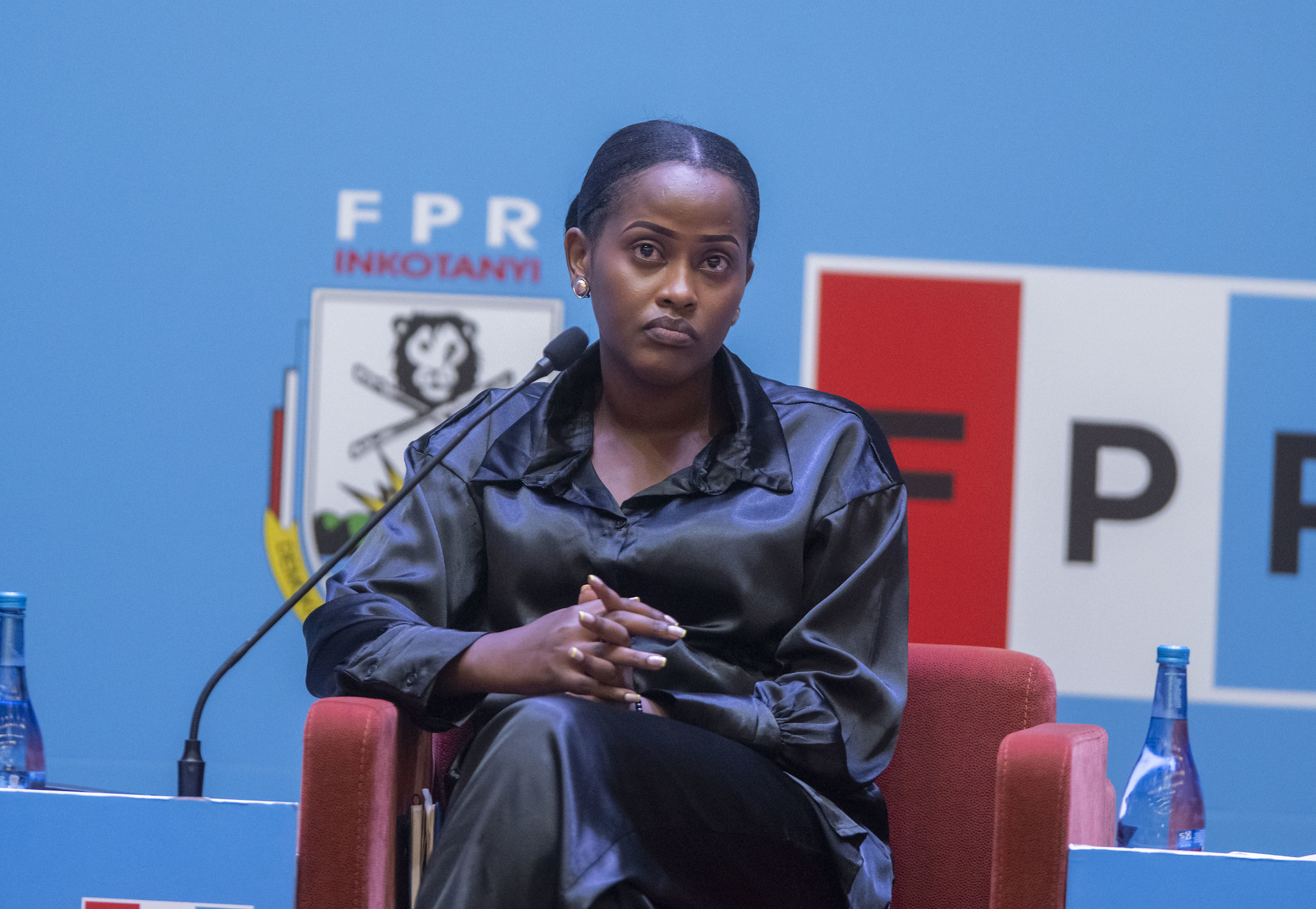 Cyuzuzo said Rwanda has given young opportunities and urged fellow youth to grab it with both hands. 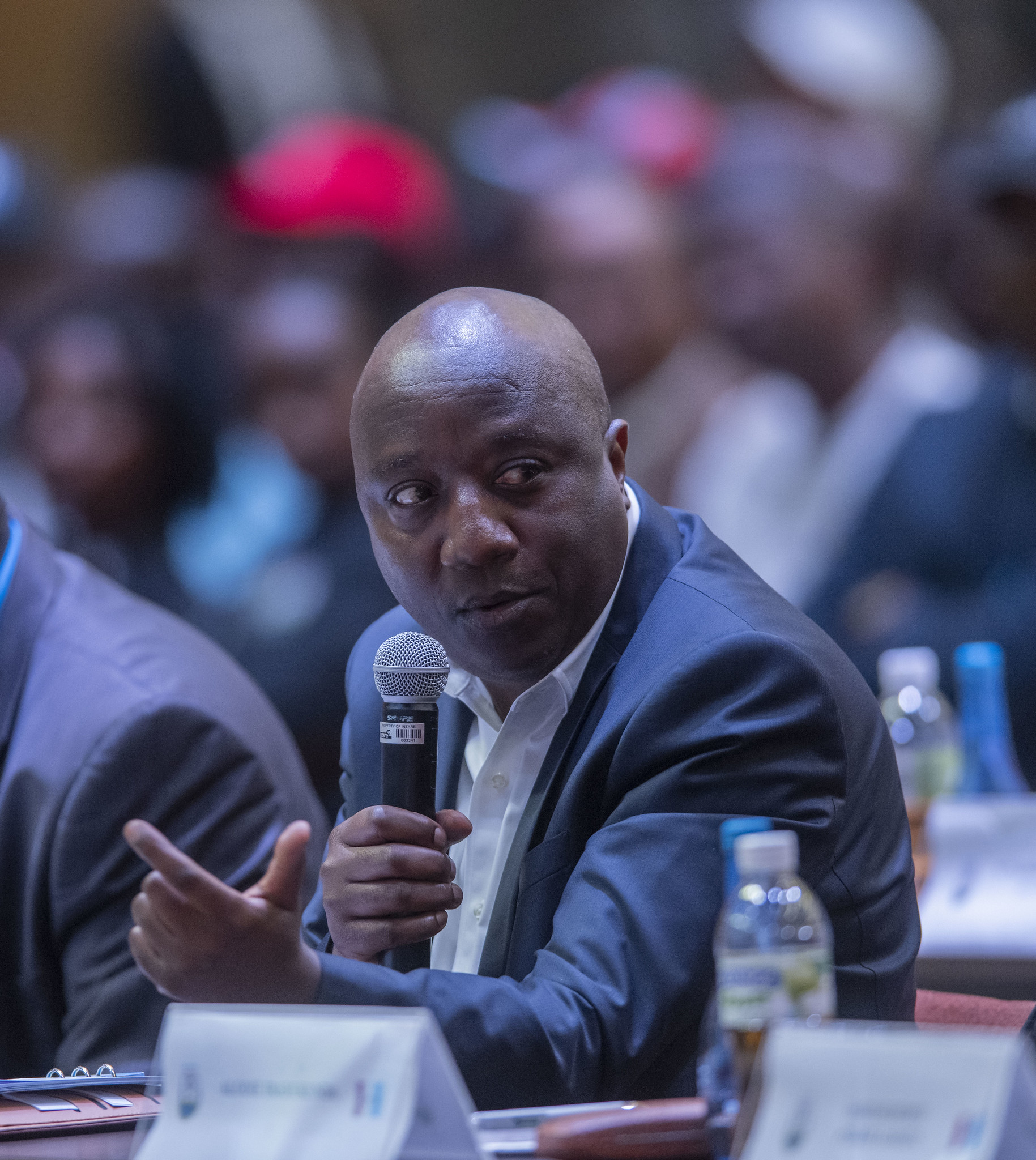 The Prime Minister, Dr. Edouard Ngirente, who was invited to the meeting, made several interventions on various government programmes. 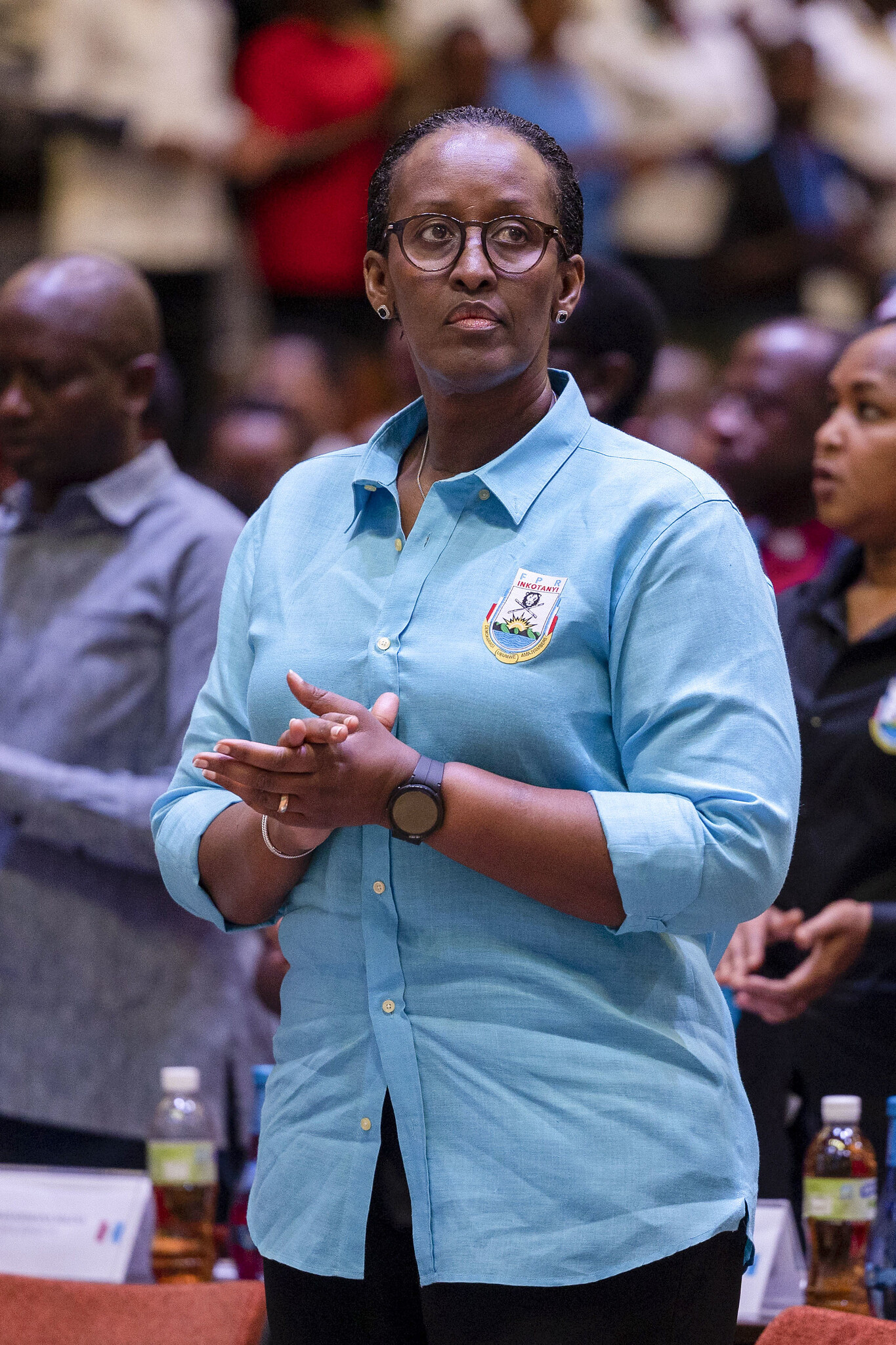 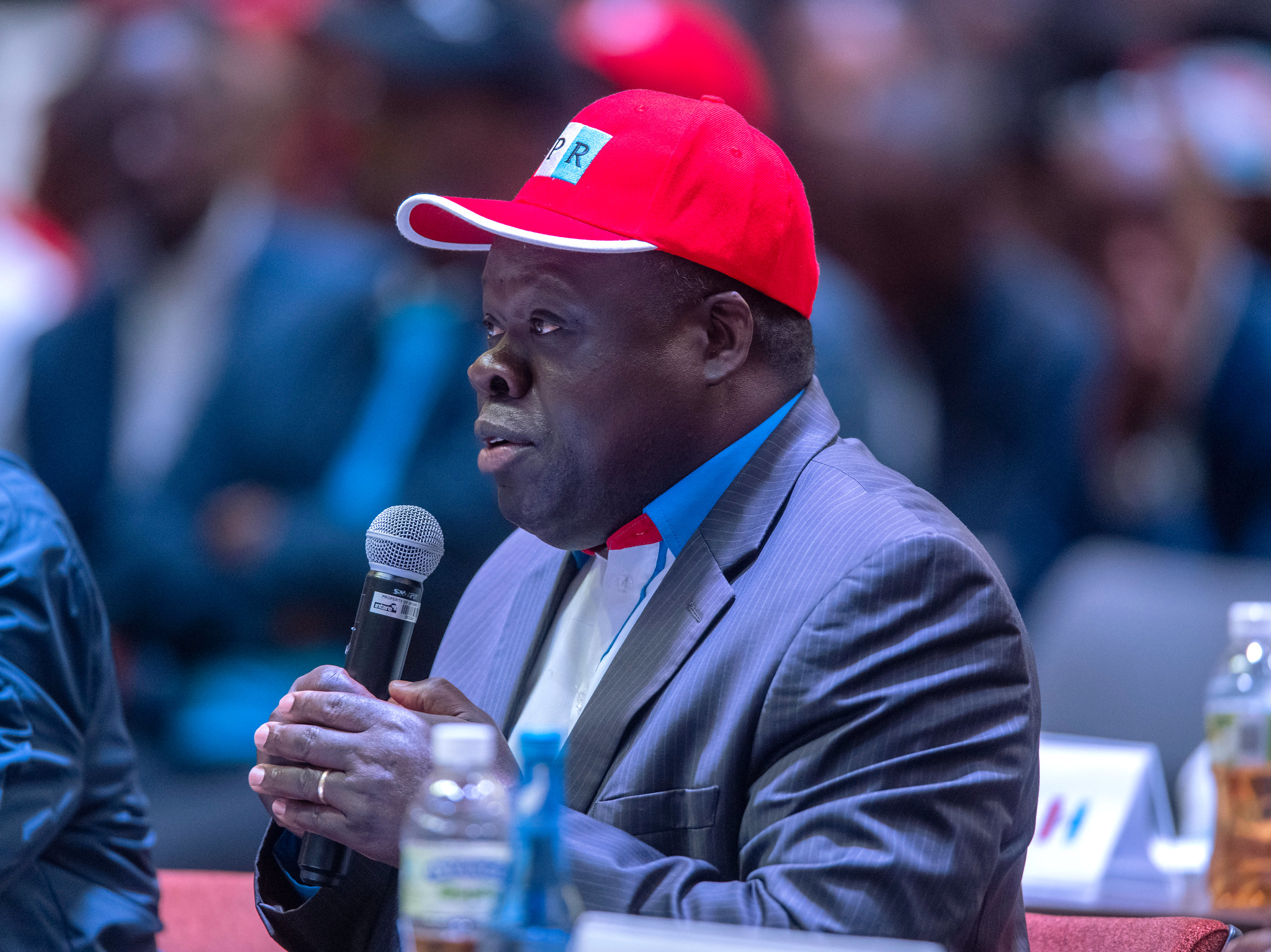 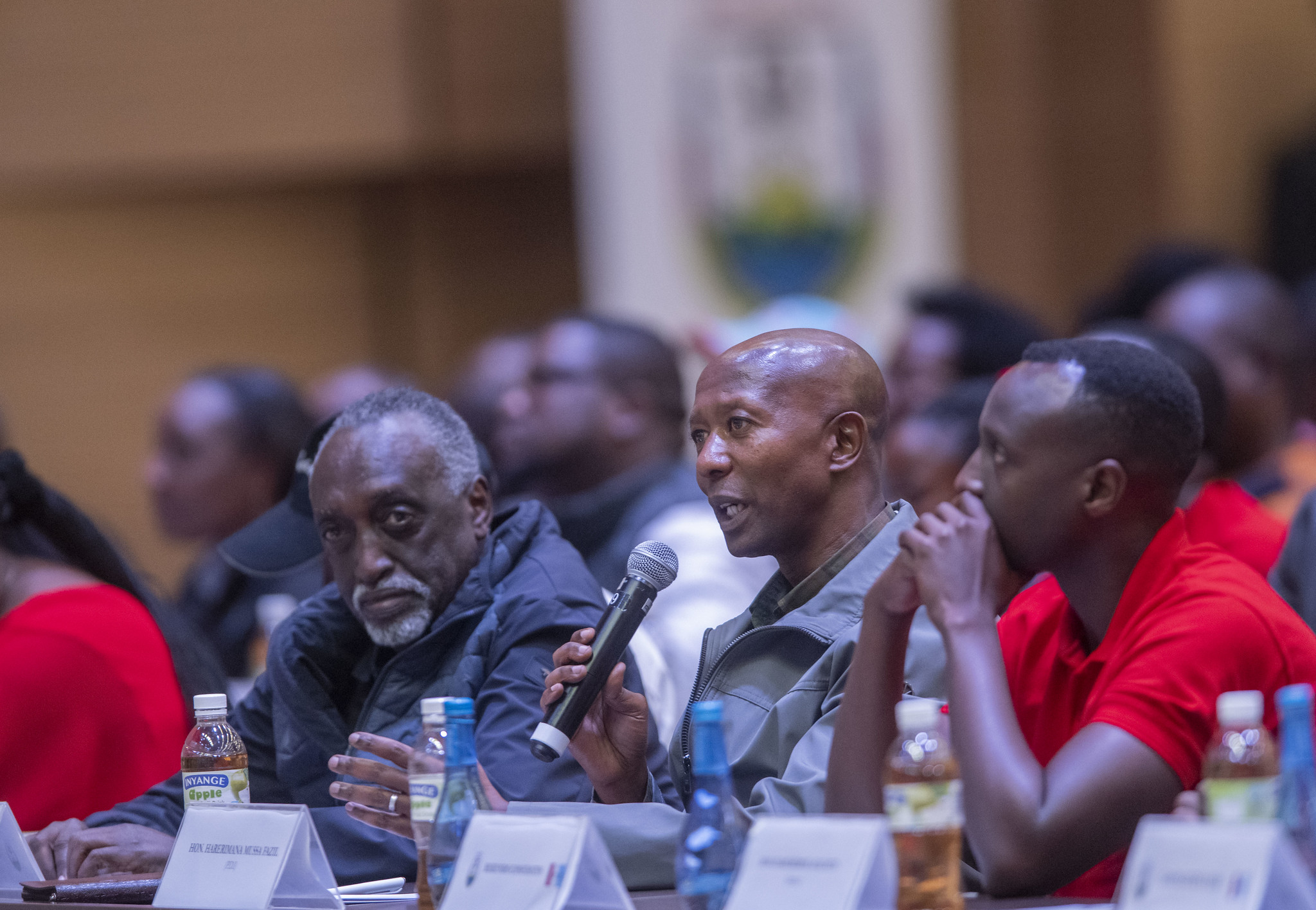 MP Mussa Fazil Harerimana said that his party Parti Démocratique Idéal (PDI) has no problem collaborating with RPF in governance. 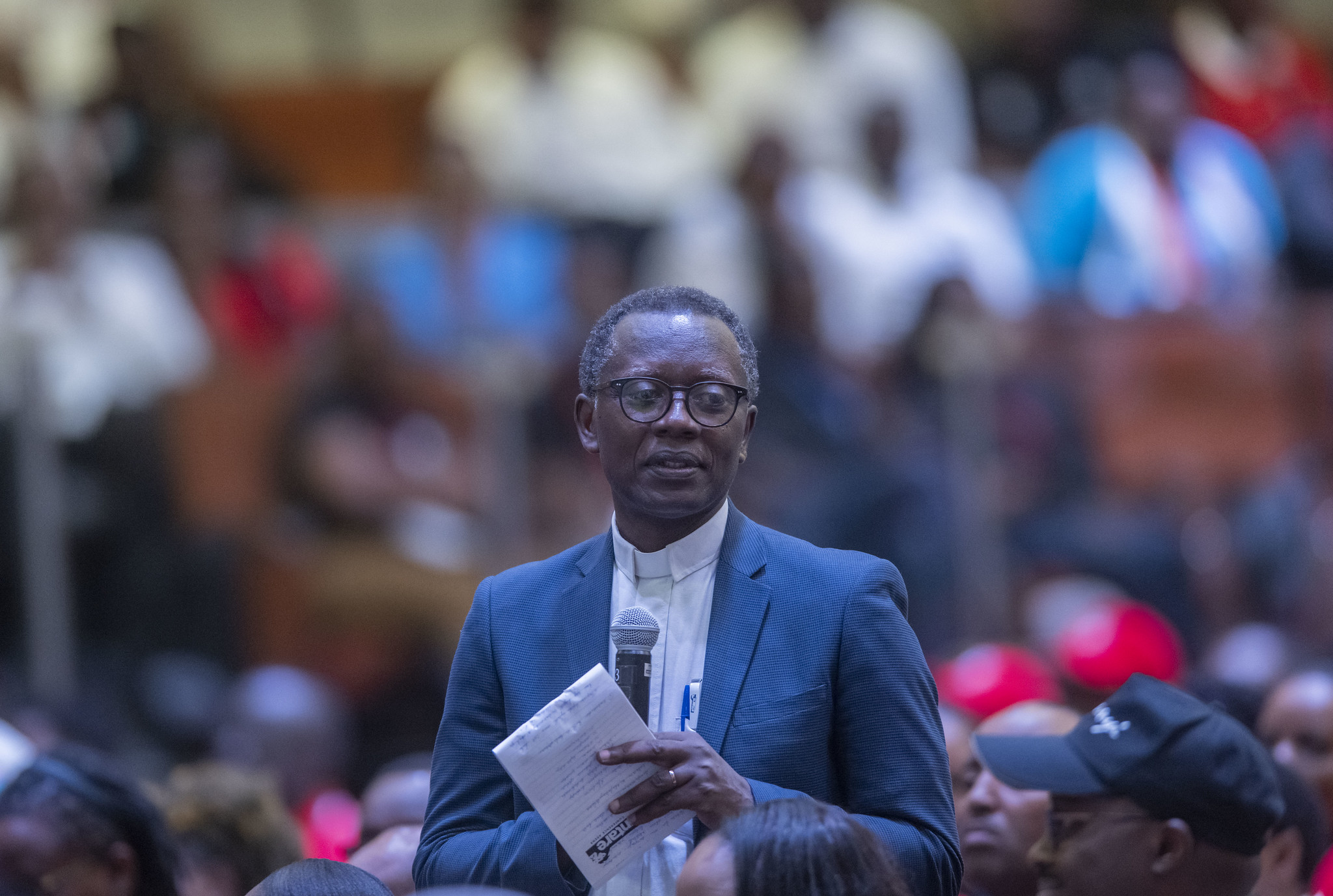 Pr. Antoine Rutayisire said faith-based groups should be fully involved in the development process and decision making because of the society power they hold. 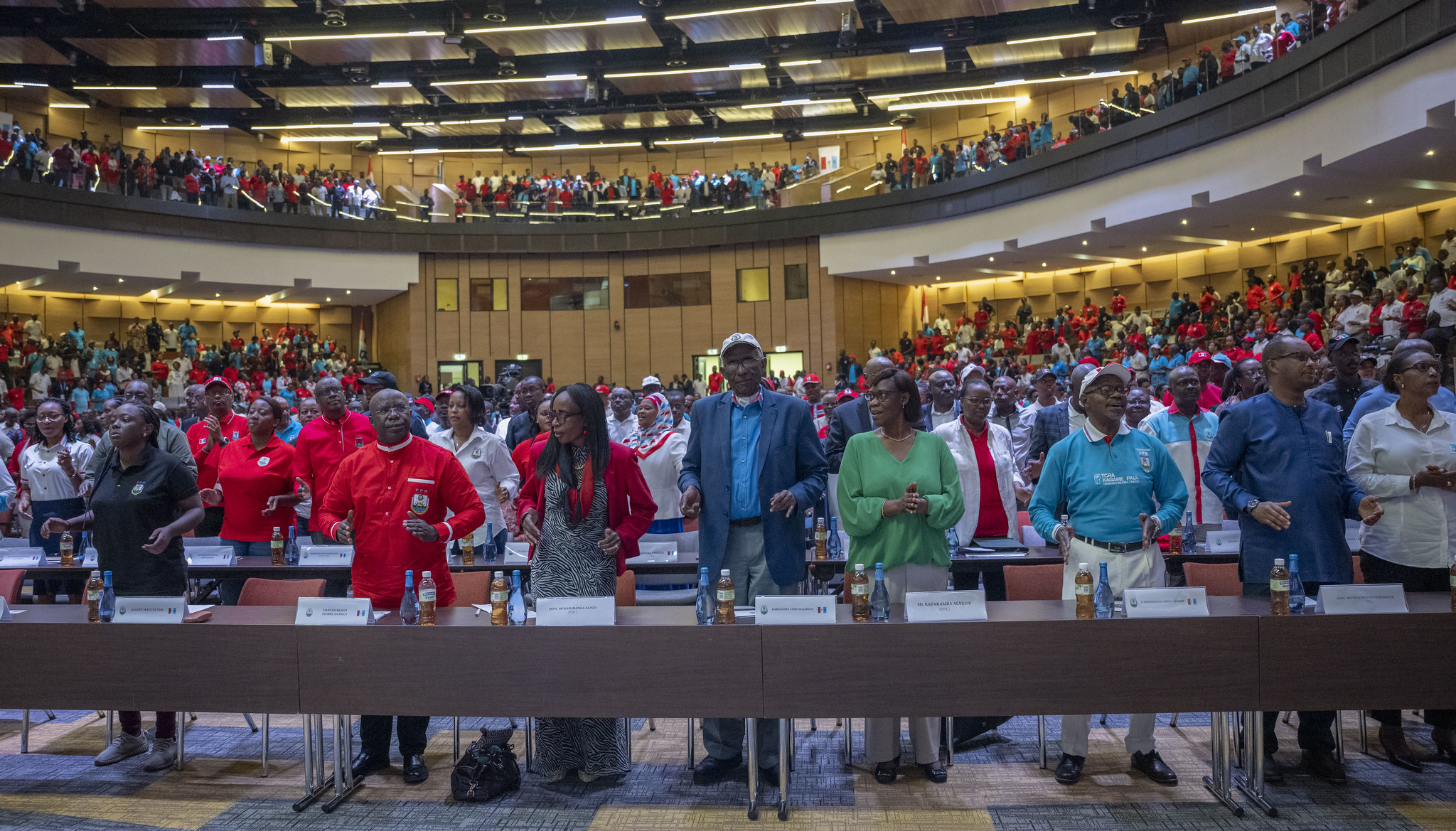 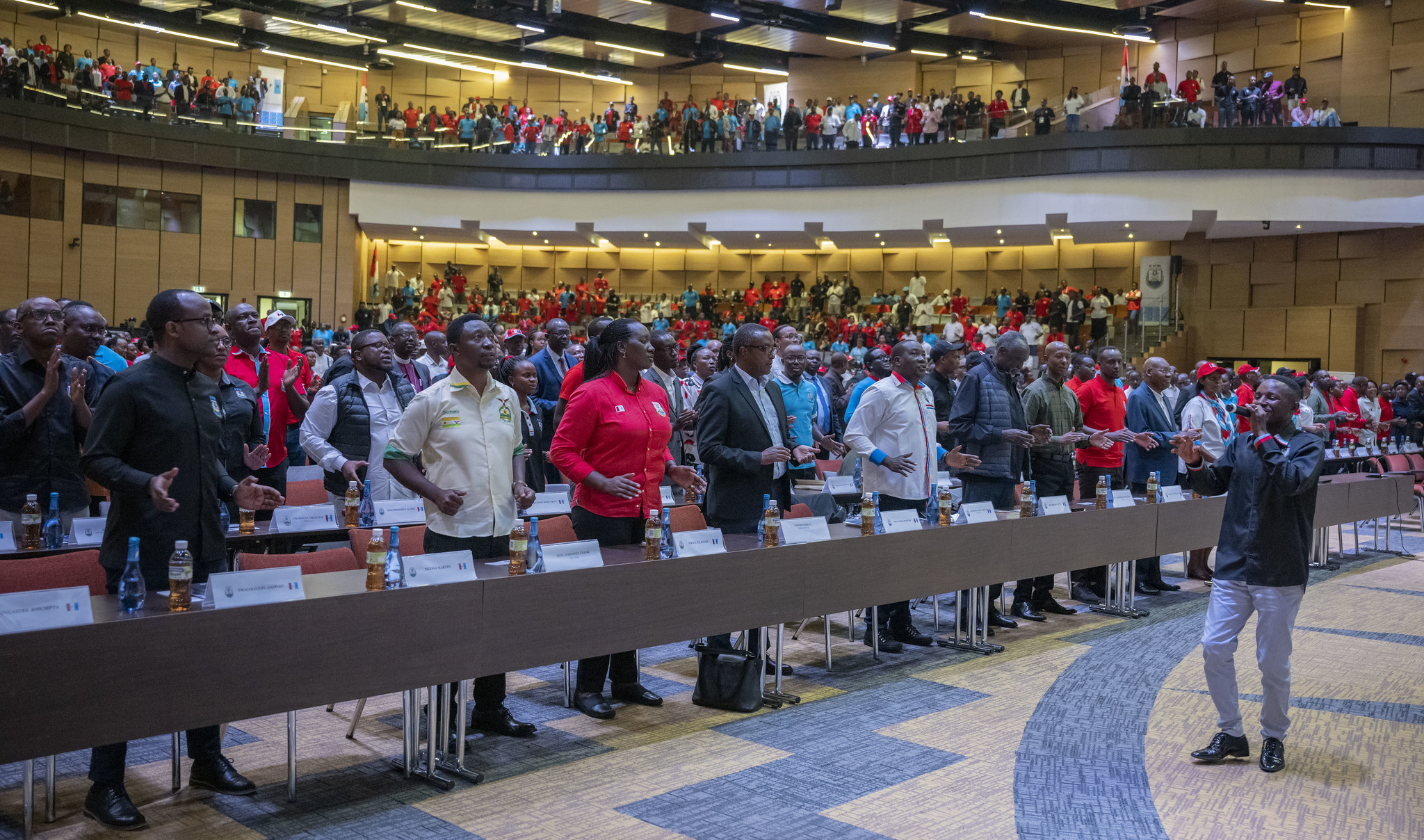 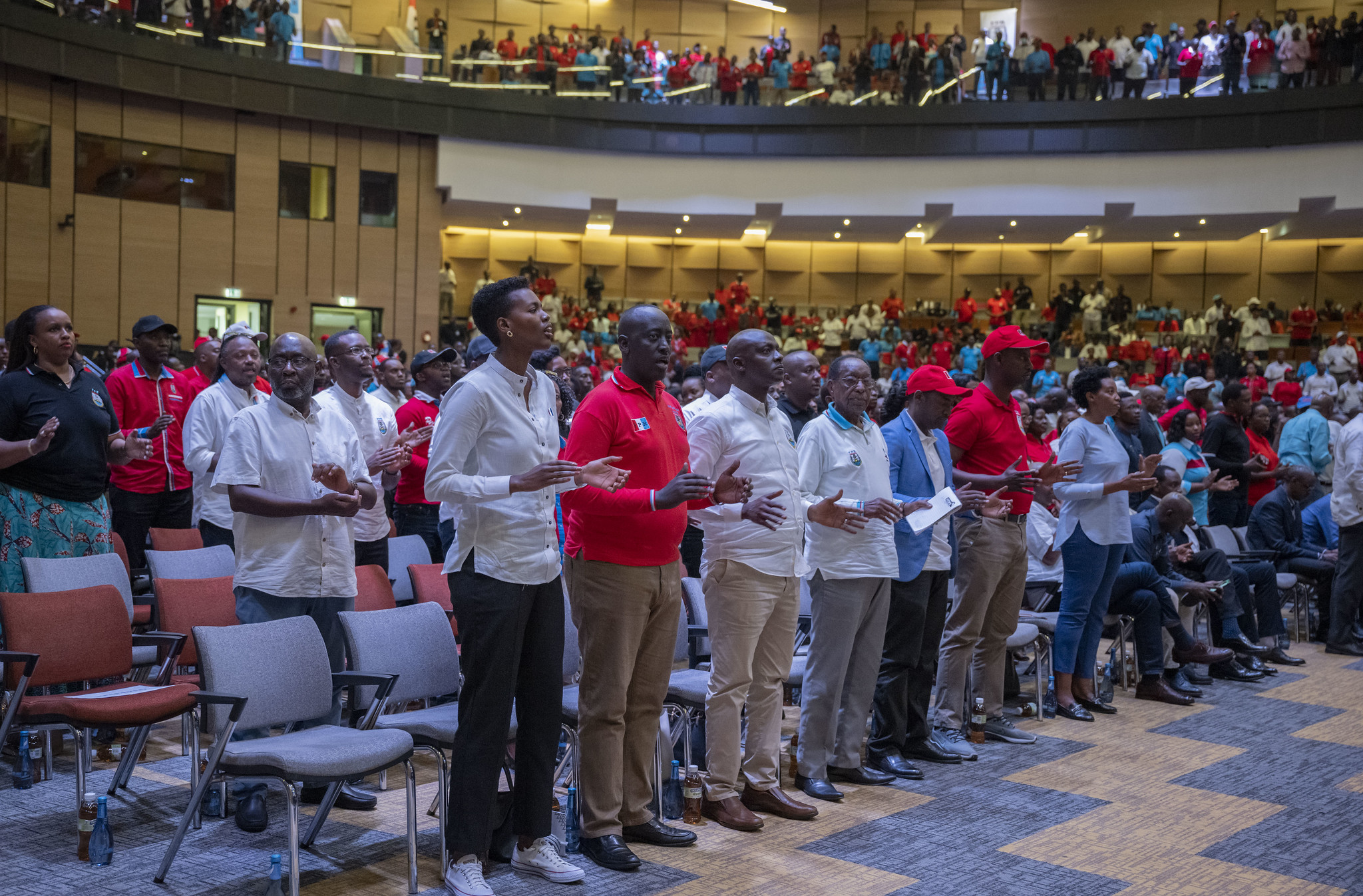 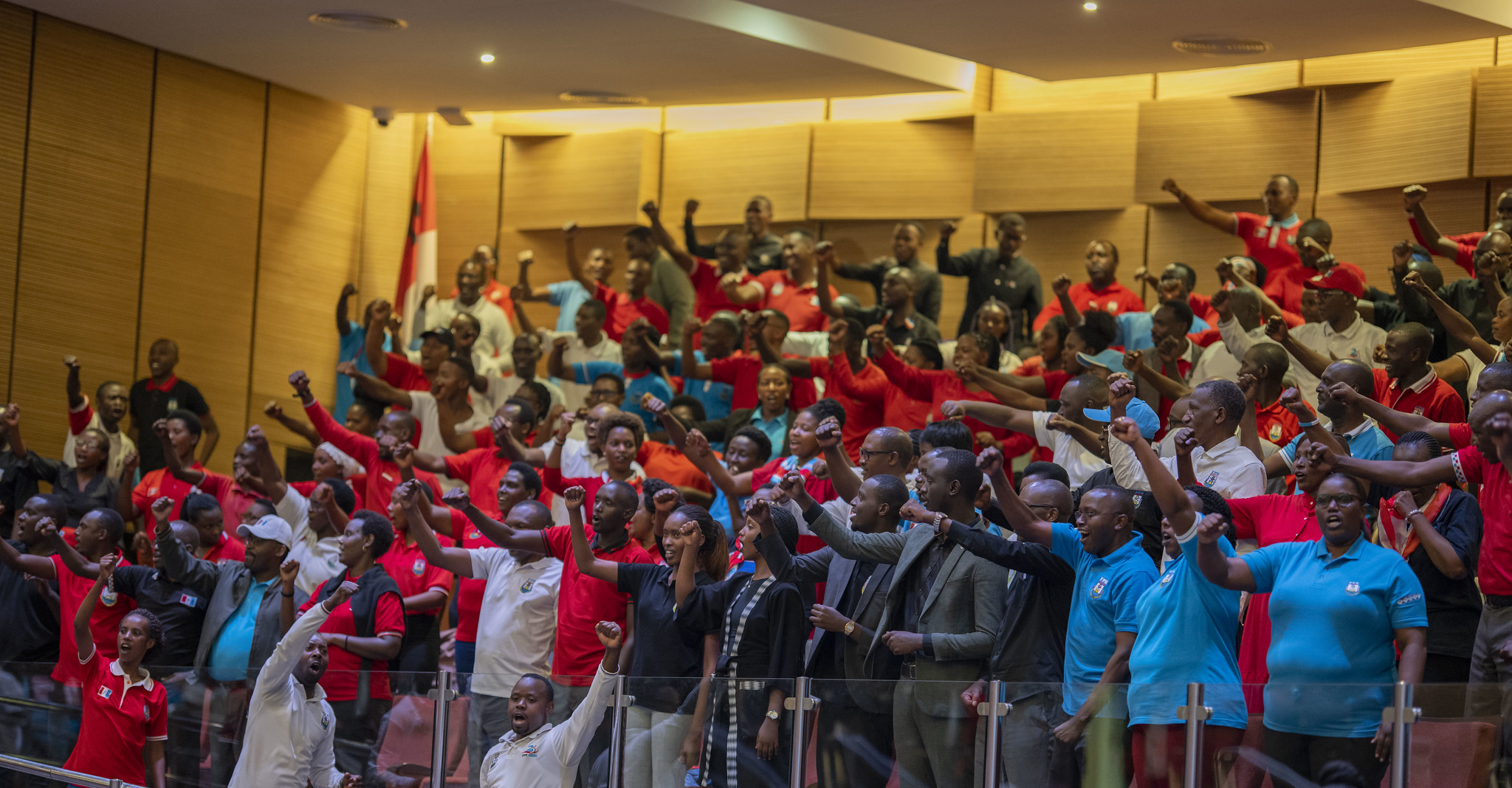 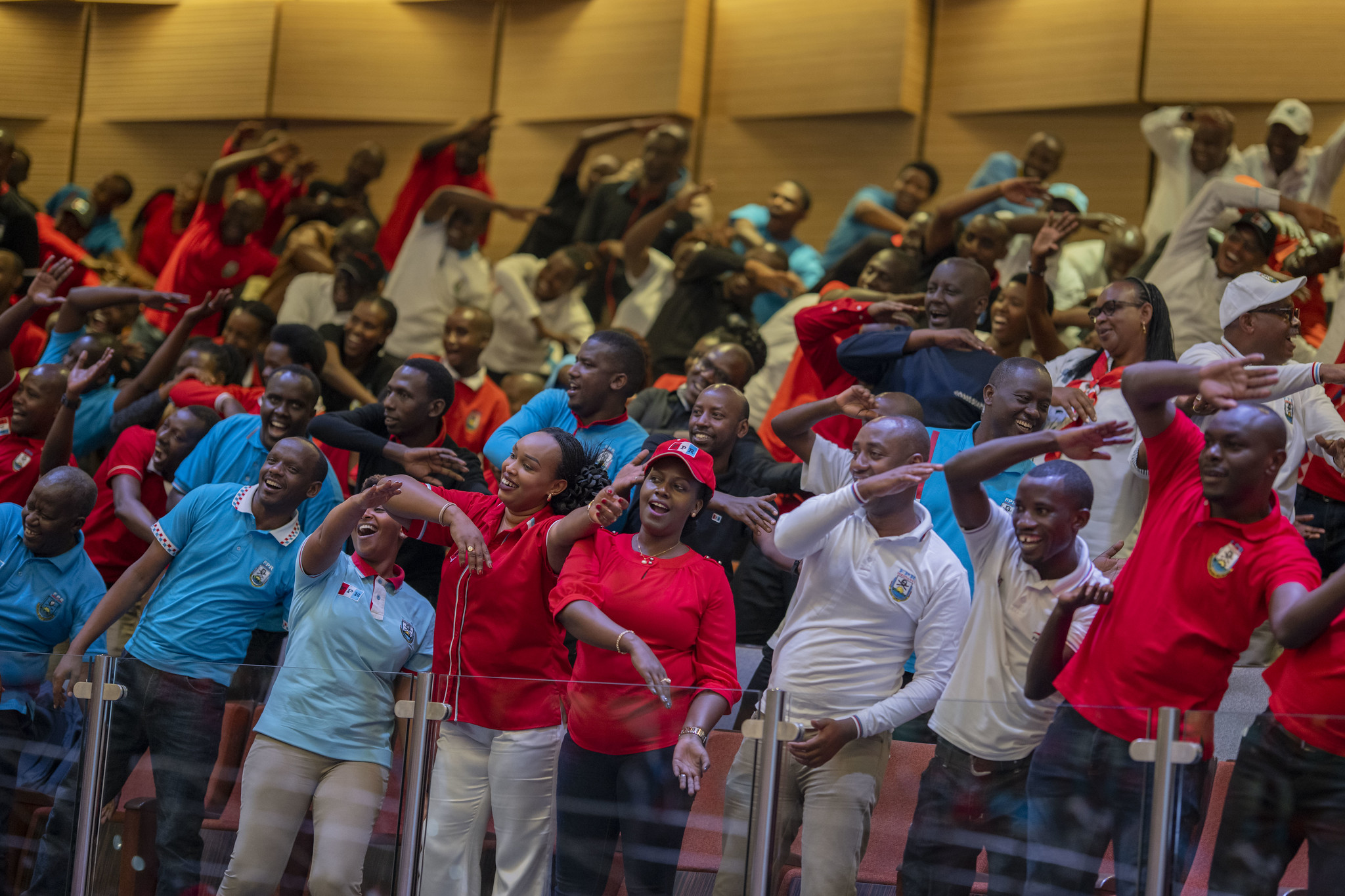 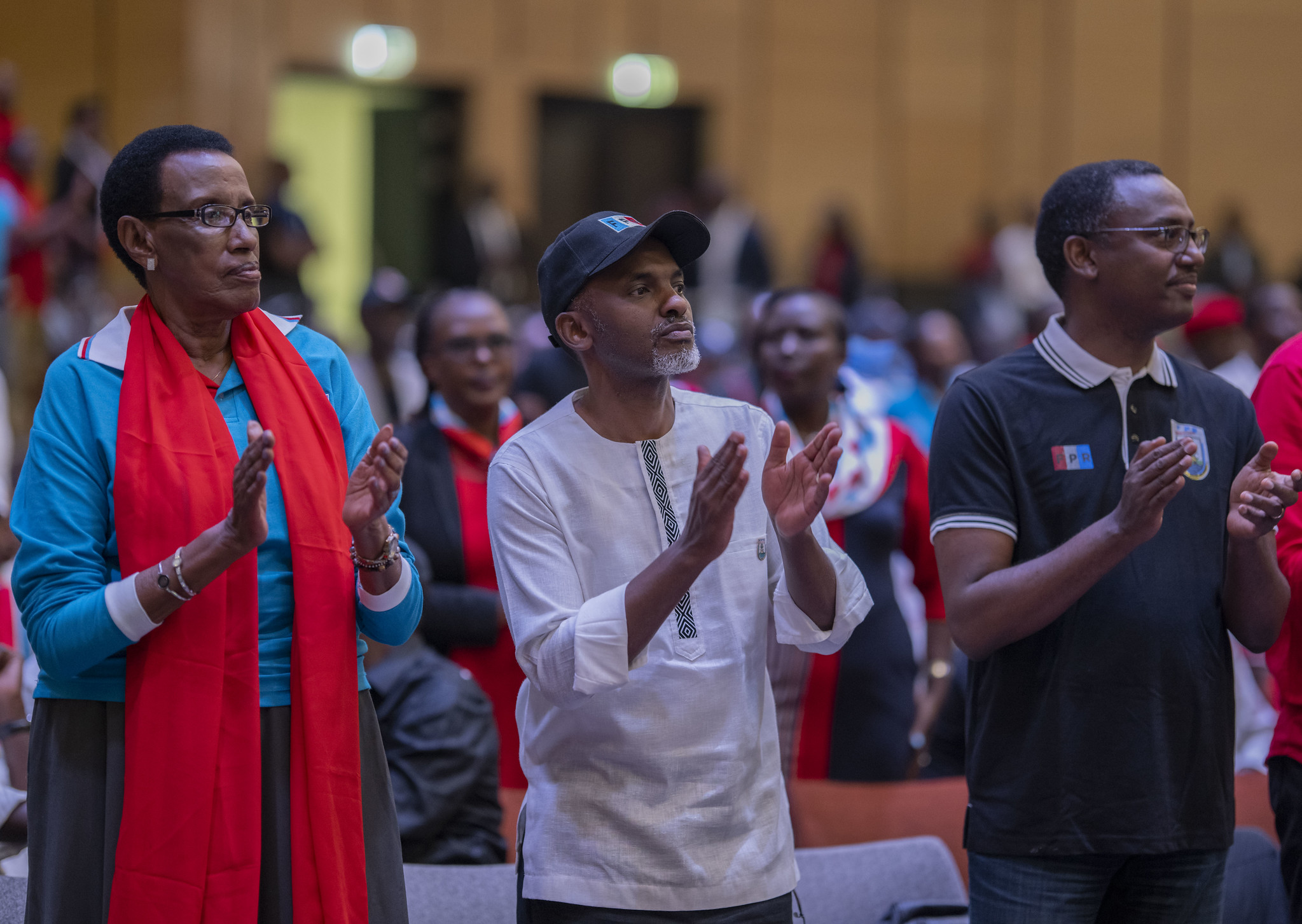 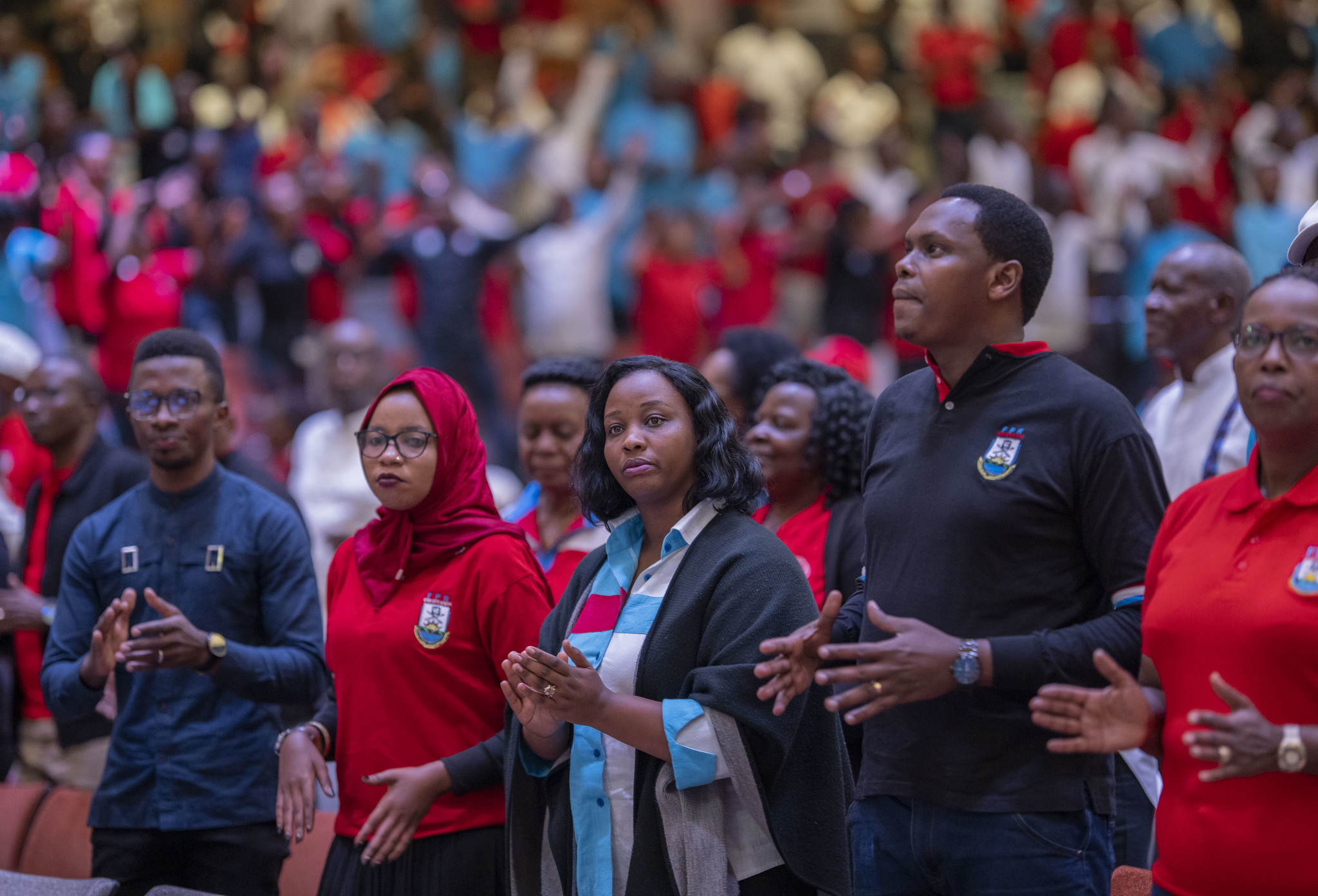