Home NewsNational Rwanda-DRC: All Eyes On Luanda As Nairobi Talks Fail To Take Off
NationalNews

Rwanda-DRC: All Eyes On Luanda As Nairobi Talks Fail To Take Off 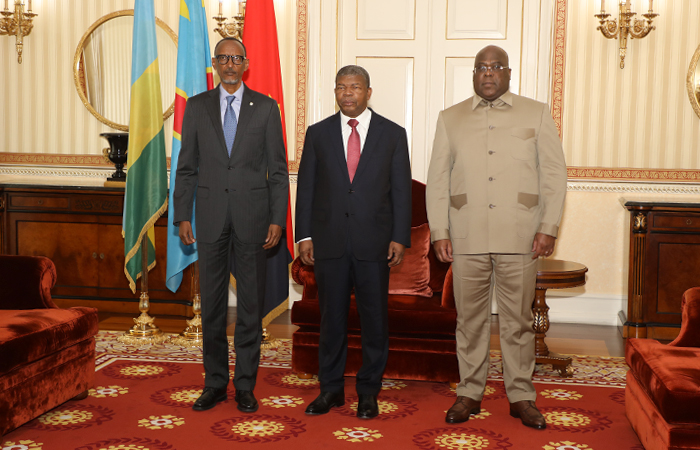 President Lourenço will host a summit bringing together President Kagame and President Tshisekedi, as well as other leaders. File Photo.

President João Lourenço will this Wednesday host a summit aimed at finding a solution to the crisis in the Eastern part of the Democratic Republic of Congo (DRC), after the third Inter-Congolese Dialogue of the Nairobi Process, which was scheduled for November 21, failed to take off.

President Paul Kagame and his DRC counterpart, Félix Tshisekedi, along with President Évariste Ndayishimiye of Burundi, who is the current chair of the East African Community (EAC) and the facilitator of the negotiations, former President of Kenya, Uhuru Kenyatta, are expected to attend the Wednesday summit aimed at de escalating tensions in the Great Lakes Region.

According to reports from Angolan media, quoting a note from the Press Office of the Angolan Presidency, President  Lourenço will urge the leaders to approve the Action Plan for Peace in the Democratic Republic of Congo (DRC) and the resumption of good relations with Rwanda.

Lourenço, the African Union Champion of Peace and Reconciliation, in charge of the issue on DRC-Rwanda conflict, who has the backing of the international community to resolve the situation is expected to help attain a level ground where a political solution can be found.

Until today, Kinshasa remains adamant to talk to M23 rebels, who have been advancing in new territories , labelling the group as a terrorist organisation. DRC accuses Rwanda of backing the rebels militarily, an accusation which Kigali rejects. The issue has put the two countries at loggerheads, leading to a breakdown in relations.

Similarly, Rwanda accuses DRC of supporting the Democratic Forces for the Liberation of Rwanda (FDLR), whose militia have been fighting within the Government forces (FARDC) ranks. The Rwandan government also accuses DRC of territorial violation, among other accusations that have led to the souring of bilateral ties.

Rwanda maintains that only a political situation can resolve the conflict, which is mainly hinged on M23 accusing the DRC government of reneging on the 2013 peace agreement signed in Nairobi and fueling ethnic violence against Kinyarwanda- speaking communities.

Kigali and observers have on several occasions pointed to President Tshisekedi politically using the conflict to strategise for re-election ahead of next year’s polls.

The Congolese leader has gone on to mobilise youth to join the armed forces and reinforce military efforts to push back the M23 who are within the environs of Goma, the country’s eastern capital which lies on the border with Rwanda.

In his capacity as the Chair of the International Conference on the Great Lakes Region (ICGLR), President Lourenço is expected to help the leaders come up with an agreeable solution to de-escalate the conflict which is threatening to draw in the entire region.

EAC countries are deploying a joint force to play a peacekeeping role, with Kenyan troops and Uganda expected to dispatch soon.

PHOTOS: In Qatar, President Kagame Makes Cases For Education For All