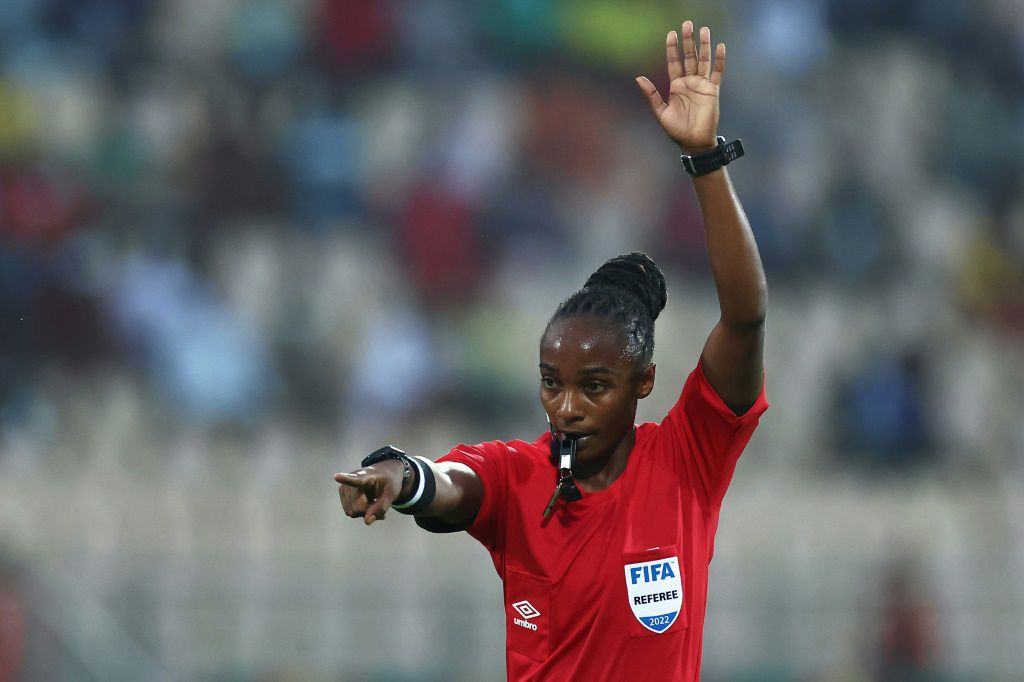 Rwandan International Federation of Association Football (FIFA) referee, Salima Rhadia Mukansanga, has been listed among the British Broadcasting Corporation (BBC) 100 Women 2022 to watch out for in the year.

Mukansanga, 34, born in Rusizi district in western Rwanda, appeared on the list that the BBC revealed on December 6, 2022 including 100 inspiring and influential women from around the world for 2022.

She was promoted to the first division of Rwanda’s Premier League in 2018, meaning she has over four years of experience in that division which has equipped her with the right skills to oversee international fixtures.

Last January, Mukansanga had made history at the 2021 Africa Cup of Nations (AFCON) when she became the first woman to referee a match at the men’s AFCON (between Zimbabwe and Guinea) and she also officiated at the Olympic Games in Tokyo.

She has already presided over games at the highest level in international women’s football. Before working in sport, she trained as a midwife.

In a historic moment for international football, Mukansanga was picked by FIFA as one of the first three women referees to officiate at a men’s World Cup, in Qatar 2022 (between France and Australia in Group D today at Al Janoub Stadium in Al-Wakrah) and also continuous to referee on the sidelines of the ongoing World Cup 2022.

This was the first time the tournament had women in the role in its 92 years.

Other African women on the BBC list include Sarah Chan, South Sudan, a Former professional basketball player who is now a National Basketball Association (NBA) scout.

From neigbouring Kenya, Judy Kihumba, a sign language interpreter, and an advocate of maternal mental health and wellness of deaf nursing mums appears on the list for her initiative- Talking Hands, Listening Eyes on Postpartum Depression (THLEP) which helps women with impaired hearing in the journey of motherhood.

Joy Ngozi Ezeilo, Nigeria, a Law professor and a founding director of the Women Aid Collective (WACOL); along her fellow stateperson Ibijoke Faborode- the Founder of ElectHER- a movement addressing the under representation of women, by democratising politics for women across in Africa.

From Ethiopia Samrawit Fikru, a Tech entrepreneur and founder of Hybrid Designs, one of the companies behind Ethiopia’s taxi app RIDE was also listed for initiative that seeks to employ majority female staff drivers, and her counterpart Wegahta Gebreyohannes Abera (Ethiopia), a humanitarian aid worker was also named for her Hdrina initiative- a non-profit organisation that aims to eradicate malnutrition caused by the war in Tigray region.

Also in the tech world- Asonele Kotu, a South African tech entrepreneur is listed for founding FemConnect, a start-up that provides technology solutions to alleviate period poverty and reduce teenage pregnancies- an idea born after Asonele Kotu wanted her own contraceptive implant removed, but couldn’t find anyone to help her.

Gehad Hamdy, an Egyptian Dentist and humanitarian also appears for founding Speak Up, an Egyptian feminist initiative that uses its social media platform to shine a spotlight on the perpetrators of gender-based violence and sexual harassment, alongside Tunisian Tennis player, Ons Jabeur- who become the first Arab or African woman to reach a Grand Slam final in the Open era, after a historic run at the 2022 Wimbledon Championships.

Hadizatou Mani, Niger is an anti-slavery campaigner who was sold off to become a ‘fifth wife’ aged 12, enslaved under the wahaya practice, which involves an influential man taking an unofficial wife to serve his four legal wives, Mani was recognized for her bravery in battling a court case against her former master who accused her of bigamy and sued her and she was sentenced to six months in prison.

Monica Musonda, Zambian corporate lawyer-turned-entrepreneur was recognized for being the founder and CEO of Java Foods, a Zambian-based food processing company and instant noodle manufacturer in the southern African region and as a nutrition advocate, mentors several other female entrepreneurs and speaks out on issues affecting women in business.

In the education sector are: Nana Darkoa Sekyiamah, a Ghanaian Author, Kisanet Tedros, Eritrea, an Educational entrepreneur, along Esraa Warda, an Algerian /U.S