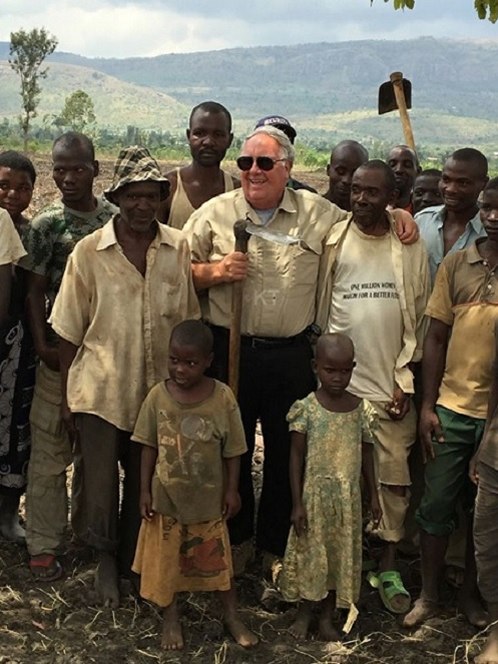 Howard Graham Buffett 61, landed in Nasho sector in Kirehe district, Eastern Rwanda where he is meeting with farmers who cultivate on 1200hactares of marshland.  Buffett’s foundation will install an irrigation system of 64 pivots to extend water to this marshland, expected to cost $24 million.

The billionaire met farmers who gathered under a tree in one of the gardens to share a perspective of what it takes to be a subsistence farmer in the countryside and the cost that comes along with it. Indeed, Buffett, who has donated $500 m to Rwanda to support agriculture, is trying to understand from the farmers the cost of farming.

To irrigate the marshland, the irrigation system will draw water from a nearby Lake Cyambwe. The Project at Nasho will be completed in March 2016.

Buffetts foundation will also establish a 3 megawatt solar energy generating project in Nasho. This energy will power-up the irrigation system and surplus will be connected to the national grid and light up homes in the sector.

Theoneste Nizeyimana, Executive Secretary of Nasho sector told KT Press earlier that this project will allow intensive farming through all the three seasons of the country. It will offer jobs to hundreds of people, and upon completion, it will transform the livelihoods of beneficiary communities because, ” he said.

The Howard Buffett Foundation donated $500million to Rwanda with the aim of transforming the country’s agriculture production through establishing irrigation systems, skills training and energy production.

Rwanda has also found it necessary to establish a modern Institute of Agriculture to offer professional training of global standards to Rwandans.

The country needs specialised skills to transform its agriculture sector to achieve the target of 8.5% agricultural growth every year.

Buffett is expected to also tour Bugesera district and later be hosted to a state dinner.