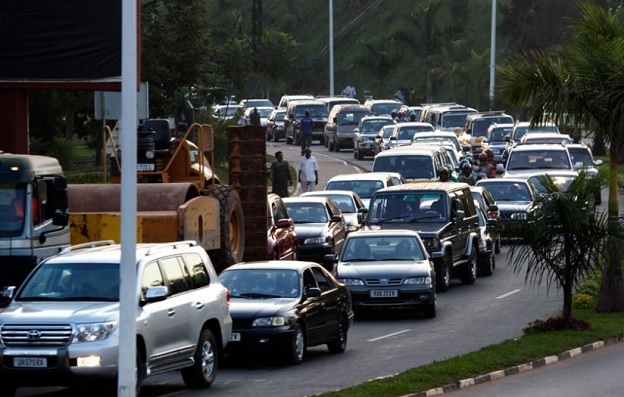 Traffic during peak hours in Kigali

Effective April 21, Rwandans begun digging deeper into their pockets to own an imported secondhand vehicle.

Rwanda has began implementing the East African Community(EAC) Depreciation schedule through a Free on Board depreciation rate ranging between 20% for 2 year old cars to 75% for 9 year old cars.

A 10 year old car and above, the depreciation has increased to 80%.

“A Toyota Carina would previously cost Rwf5 million, but under the new policy, it will cost Rwf7 million,” says Gilbert Mugabo, a car dealer.

Mugabo told KT Press that he predicts a sharp decline in importation as a result. In fact, he has already begun feeling the impact in the first week. “I used to make at least 30 sales a day, I have made none today. The week is bad.”

“Clients come, inspect as usual, but when you tell them the price they walk away,” says Mugabo.

The increase of taxes is already being felt among clearance agencies, like Top Movers where they may spend a day without a client, compared to 5 clients on average per day.

“There is no need to buy an old car anymore. You still spend a lot for shabby vehicle that would be removed from the road the following day,” says Fidele Karenzi, a Kigali resident who is planning to buy a car at a warehouse.

“I want to save more money and come back later for a newer car.”

Despite the heavy tax burden slapped on used cars, the demand will still be high. The purchasing power of Rwandans, especially the middle class, is still low; chances of buying a brand new car are very minimal. On average, a Rwandan earns $800 per year.

Owning a car worth $20,000 remains an astronomical possibility. Used cars will continue to be the preferred choice, regardless.

According to Raphael Tugirumuremyi, the Commissioner for Customs at Rwanda Revenue Authority, “the policy seeks to discourage importation of used cars and help cut on carbon emissions.”

This could be the best way EAC has chosen to start its automobile industry and to phase out imports from Europe and Asia.

In the March 17, Ordinary EAC Summit that took place in Arusha-Tanzania, the East African Heads of State approved a project proposal of assembling motor vehicles in the region.

The plant is expected to decrease the cost of acquiring a car.

According to Rwanda Revenue Authority, the country registered 5,865 vehicles, raking Rwf53 billion in revenues between July 2014 and July 2015.