Janvier Busogi has been living in the United States far away from his home country Rwanda. His family once lived in Rubavu town in western part of the country.

In 2004, his father Mathias Nyagasaza died but had been battling a property case in court. Busogi wanted to return to Rwanda and follow up on this case but was threatened by relatives that he would be arrested if he set foot on Rwanda soil.

Busogi told KT Press that his relatives always warned against any attempts to travel to Rwanda, “Because you were blacklisted among enemies of the country.”

In 1993 Nyagasaza acquired a petrol station from Energy Resources Petroleum Ltd (ERP) which was represented by a one Valens Kajeguhakwa.

However, after acquiring the petrol station, Nyagasaza was arrested on different charges that led him to be convicted.

Two years later while Nyagasaza was in prison and his children living in exile, Kajeguhakwa the previous representative of the petrol station grabbed the property.

When he was released, Nyagasaza claimed his petrol station, won the case and in 2004 registered the property under his name.

Busogi had been wondering for so long about repossessing his father’s property that had been illegally seized by Kajeguhakwa’s son.

For Busogi, the solution was meeting President Paul Kagame at the  June 2011 Rwanda Day in Chicago. He flew all the way from Texas to Chicago to join other Rwandans in Diaspora.

During the event, Busogi grabbed the microphone, introduced himself and presented his family case to President Kagame.

President Kagame without delay told Busogi to come and claim his property anytime without fear, because Rwanda is home.

Three weeks ago, Busogi flew back to Rwanda to claim his father’s property, still with fear that he may not be safe.

Upon his arrival, the land and mapping department directed the Mayor of Rubavu district Jeremie Sinamenye to return ownership right of the petrol station to Nyagasaza’s family represented by Busogi.

“After realizing that a title lease numbered R.XVII folio 53 belongs to Mathias Nyagasaza and there were no other official transactions on the property thereafter, I request you to nullify the land title that was given to Energy Resource Petroleum Ltd,” the letter reads in part.

Subsequently, Busogi was given the title lease and he went back home all smiling.

“I had never thought that my family can get anything good here in Rwanda. Back in US, we had become Rwandan haters because there is an anti-campaign that the leadership here is bad,” said Busogi.

“You proved us wrong; I was taking US as new home and Rwanda just another country but I now believe, Rwanda is home indeed.”

The mayor of Rubavu said, “There is no way Rwanda can negate rights of its daughters and sons. Anyone with a property claim could come to us and we hear the case.”

Meanwhile, Busogi said other family properties in Rubavu town were also sold by a cousin who used to tell Nyagasaza family “beware! The day any of you guys sets foot in Rwanda, he/she will be killed mercilessly.” 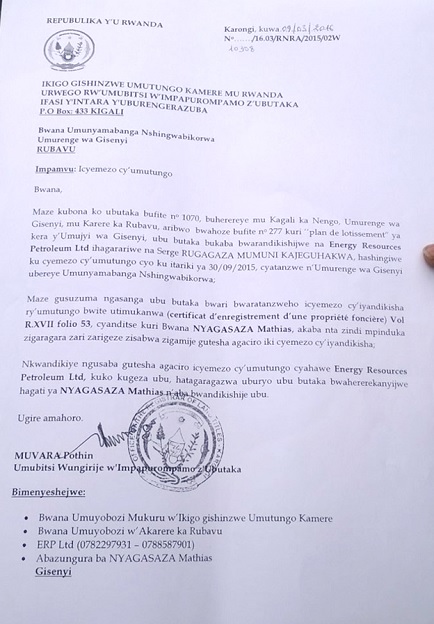