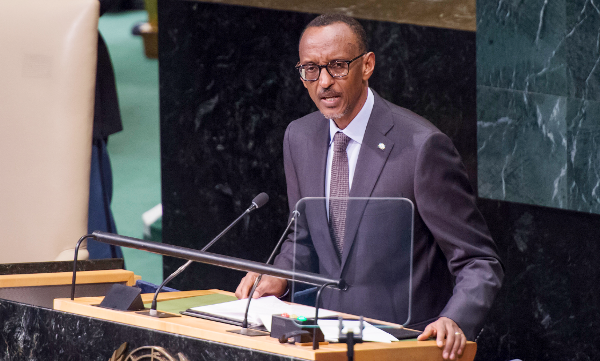 Rwanda’s President Paul Kagame has told the UN General Assembly that the goals the world has set will only be met if countries acknowledge their dependence to each other.

In his 8.42 minutes address to the 71st UN General Assembly on requirements the world needs to meet the Sustainable Development and climate change, he said, “The progress of every country is closely linked to the progress of every other, and we all have a role to play.” he said.

“The world should build from lessons learnt and be inclusive, especially on women.”

Leading the world in gender equality, with largest number of women in parliament, President Kagame said “If women are not reaching their potential, then none of us are.”

Rwanda is leading the world in HeForShe campaign that intends to promote gender equality and empowerment, with woman being included in development agenda.

“I am proud to be a HeForShe and urge others to support this important campaign,” said the President.

Another item that will guide the world to the achievements of the 2030 targets, the SDGs, is internet, an indispensable element the world can’t go without.

“Everyone in the world needs to have access to high speed internet,” he said while commending the players of internet connectivity including UNESCO and ITU under which he operates as co-chair of UN Broadband Commission.

The president tackled several other subjects including the international relations and mutual respects between countries whereby he said, “The way we relate to each other in the international community has to begin to change as well.”

From a request to the world to support peace and security, a component where Rwanda is doing well given its position in top ten among peace keeping contributing countries, Kagame talked about refugee matters.

He called for consistency and compassion in dealing with the growing global refugee crisis and he said, “the issues of migration and refugees should be continuously addressed and not only when wealthier nations are affected,” said Kagame to the applause of the assembly.

The United Nations held special sessions to tackle the issue of refugees despite what observers described as double standards from the wealthier nations.

Earlier on the sidelines of the assembly the Director of OXFAM International Winnie Byanyima had echoed a similar message calling on the world’s wealthiest nations to do more regarding the issue of refugees.

“The top five nations in the world only accept five percent of the world’s refugees and they can do much better,” she said.

All these efforts however would be vain if environment is not taken into consideration.  The president took an opportunity to appeal to the world to join Rwanda in amendment of Montreal protocol which will phase down the harmful greenhouse gases.

The amendment will be decided during the 28th Meeting of the Parties to the Montreal Protocol, known as MOP28 in Kigali next month. Over 1000 delegates are expected in the meeting.

“Rwanda will continue to play its part. We have gotten many things right but there is no doubt that we could be achieving even more,” said the president.

“If we keep the people for whom we are fighting on the front of our mind there is no reason why we cannot achieve everything we have committed to.”

President Kagame is in the right position to focus on SDGs during the UN General Assembly debate. Rwanda has been named as host of the African Center for SDGs.