Rwanda has launched hunt for cigarette packets which do not warn smokers against dangers of smoking.

Cigarette packets should bear inscriptions like; “Smoking kills, causes cancer, heart diseases, and other health vices such as impotence, infertility, miscarriage and stroke.”

A statement released by Rwanda Biomedical Center warned that tobacco packaging without any health warning to consumers will be impounded.

The decision is part of reinforcement of smoke free law of April 8, 2013 which seeks to reduce smoking rate and eliminating exposure to second hand smoke.

Manufacturers were given a period of one year until June 2016 to stock out all products that did not comply with the law.

This law further provides that smoking areas should be well marked and accessible only to people above the age of eighteen (18).

Rwanda has taken a series of measures to control smoking.

According to Ministry of Finance and Economic Planning (MINECOFIN), basing on the selling price, tobacco taxation increased to 150% this year from 60% in 2001.

Consequently, tobacco consumption has reduced by 11% in Rwanda as per 2015 findings.

In Rwanda, there are two main products: Intore, the local brand which costs Rwf 1,000per packet, and Dunhill (imported) costs Rwf 2,000. 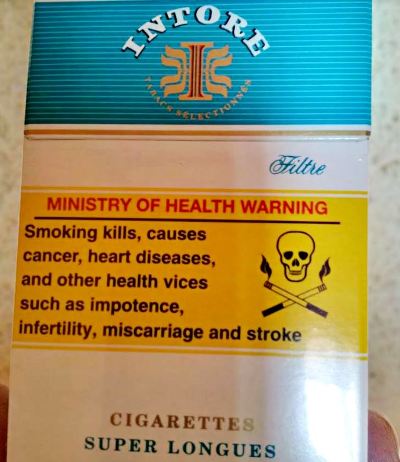