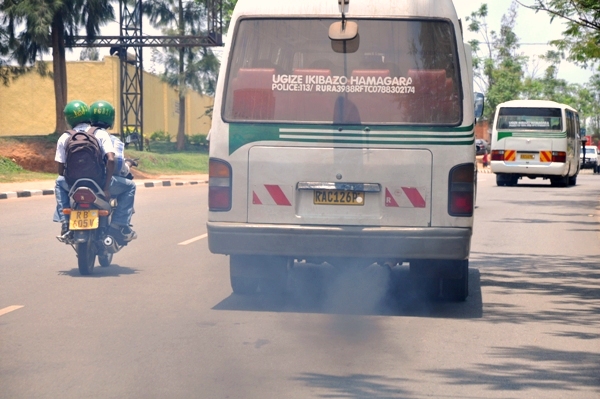 Tens of thousands of vehicles using diesel on Rwandan roads are spewing dangerous toxins – but regional opposition has prevented government from doing much about it.

The diesel imported in Rwanda has sulfur levels which are banned in Europe and North America.  For example, the European Union set a limit of 10 parts per million of sulfur that can be allowed in fuel (diesel and petrol) to be used on its territory.

However, the Rwandan standard is 50ppm of sulfur in the fuel it imports but is considered extremely dangerous in Europe.

In 2011, the East Africa Community (EAC) resolved to import only low sulfur fuel (cleaner fuel), to avoid sulfur oxides which cause respiratory diseases.

Raymond Murenzi, the head of standards division at Rwanda Standard Board (RSB) told KT Press, “We started in 2012 importing 50ppm fuel. Since last year, there was no more 500ppm fuel in Rwandan stores.”

Rwanda, like the East African community countries are using fuel imported from Arab countries. The choice on fuel standards is dependent on suppliers and their equipment.

“Their raw materials and their refining technologies afford just that,” Murenzi said, adding that there are European standards but in East Africa “we adopted our own standards that are workable.”

A source told KT Press on condition of anonymity, that the region may afford oil with lower sulfur, but “reaching the 50ppm itself required a lot of lobbying because some decision making organs in the region were adamant to endorse the agreement following selfish interests.”

Upgrade of quality standards was not good news to everyone. Last year, Tanzanian exporters where 80% of the petroleum products to Rwanda come from, mixed quality oil with the 500ppm oil in 18 tankers.

Once in Rwanda, the country tested the oil only to send it back to the origin.

In normal practice, the country of origin tests the quality of fuel, and then provides the exporter with compliance documents, but Rwanda does its own quality tests once the products reach the country.

The issue of fuel testing being set aside, now Rwanda is moving to the gas emission testing.

According to Remy Duhuze, Director of Environmental Regulations and Pollution Control at Rwanda Environment Management Authority (REMA), two laws will help to permanently deal with toxic vehicle gas emission. They include the already passed Air Quality Preservation and Control law of July this year.

REMA has also finalized drafting of the emission testing bill to be submitted to the cabinet before end of this year.

For this to work, four vehicle inspection centers are being equipped at the Integrated Polytechnic Regional Centers (IPRCs), to serve both car inspection and workshop for students.

Concurrently, Rwanda is building 8-air testing centers, across the country to regularly publish data on air, in a system which is more like the weather forecast.

Currently, the country is relying on a poorly maintained air quality testing apparatus at College of Science and Technology.

Dr. Vincent Mutabazi, the Director of Other Respiratory diseases at Rwanda Biomedical center told KT Press that Rwanda has made tremendous step to fight greenhouse emissions but “air pollution remains an alarming health aspect which should be checked.”

Mutabazi says that the increase in burning fossil fuels, as a result of industrialization, growing numbers of used vehicles, old engines, and smoking are main causes of respiratory diseases in Rwanda.

“We have not reached the extent of China, but we should be concerned about the toxic exposure which causes disease like cancer, chronic bronchitis, asthma, and chronic obstructive pulmonary diseases,” Mutabazi said.

Though there are no figures showing deaths related to pollution, chronic obstructive pulmonary diseases cases which are developed over time as a result of toxic exposure remain the commonest cases, according to Dr. Mutabazi.

The United Nations Environment Outlook report- 6, released this week shows that over 600.000 Africans die every year as a result of air pollution and the highest cases are asthma.

In any case, Rwanda is not in the same basket of countries where, a report by Swiss NGO Public Eye said, have become dumping site of high toxic diesel and gasoil by Swiss oil exporters.