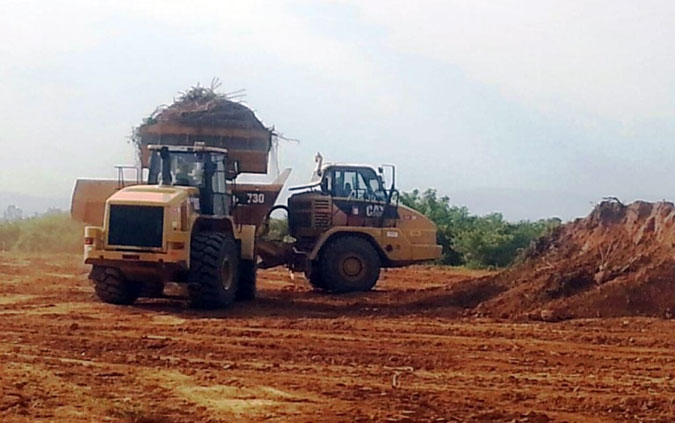 Standing close to the airport site premises, there are a lot of movements as both site supervisors and casual laborers are busy working under the hot weather to meet the December 2018 deadline.

Emmanuel Nsanzumuhire, Bugesera district Mayor said: “Our communities here are aware of the construction and what it means to their development. We expect many investors in our district as a result of the airport.”

Meanwhile, 5,972 households have already been expropriated from the land gazetted for the airport. Information available to KT Press suggests about 30 locals have yet to be compensated.

Frank Kobucyeye, an official in Rwanda Housing Authority (RHA) told KT Press that the unpaid residents are those who haven’t presented their bank details.

“So far 99% of the residents have got their expropriation fees. The remaining 77 households will be paid before end of this month as they have properly filled their forms,” Kobucyeye said.

Phase I of the airport will cost $418 million, scheduled for completion by December 2018. The contractor will deliver the facility with a capacity to receive 1.7 million passengers every year.

Upon completion of this phase, extension works will be undertaken, to upgrade the capacity to 4.5 million passengers annually. The extension will require additional $ 400 million, bringing the total cost of the project to $818 million.

Government has made it clear to the contractor that any delays will come at huge cost. Rwanda has a small airport in Kigali, which the authorities believe cannot be able to handle growing traffic as the country emerges to become a travel and hospitality centre.