Rwanda will start attracting more scientists from across the world coming to conduct research on various projects.

President Paul Kagame today officiated the launch of the World Academy of Science (TWAS) summit in Kigali where he said several centers of excellence have appreciated working with Rwanda.

He welcomed to the country science and technology institutions wishing to establish their offices, to join existing organizations that have built a great partnership with Rwanda.

“Rwanda will continue to provide an enabling environment and the support required for the success of these partnerships,” said the President.

Rwanda’s drive to open up for science institutions to settle in Rwanda is a great contribution to bridging the gap in science related investment as the president indicated that investment in research and development in Africa, and other developing areas, is still too low.

“In most countries, less than one in three scientific researchers is women. And our continent urgently needs to produce many more scientists and engineers generally,” he said.

However, the future of investment in sciences is promising given an initiative of governments to come together and contribute to training of 10,000 PhD-level researchers in Applied Science Engineering and Technology and to multiply the number of applied science.

President Kagame advised governments should make this field attractive for the private sector to also get involved as beneficiary.

During TWAS, President Kagame was awarded a medal for embracing science, technology and innovation for sustainable development in Rwanda and Africa, an award he said it “honours all Rwandans whose hard work has got our country to where it is today.”

Several other prizes were awarded to other scientists that contributed to finding solutions to society challenges through sciences.

They include Zhao Dongyuan who took Lenovo Award after developing materials to clean water, deliver medicine and improve batteries.

The 27th TWAS General Meeting will is being held in Kigali between 14-17 November in Kigali, with the theme of “Innovation for Sustainability”.

Rwanda was chosen to host the meeting because it is “globally recognized for its ambitious efforts to drive economic development and human prosperity through science, education and technology, and it has emerged as an African leader in science policy.”

A ministerial meeting will discuss detailed views of the challenges and opportunities requiring science in the developing world. Symposia will focus on science related to epidemics; insights into the universe; and science and technology in Rwanda. 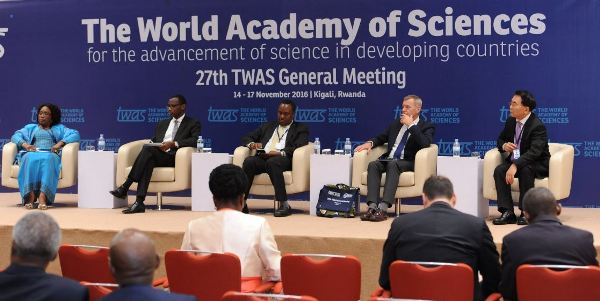