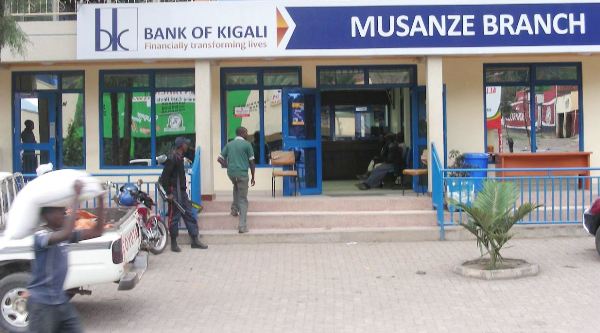 Bank of Kigali is listed on Rwanda Stock Exchange

Bank of Kigali, Rwanda’s largest bank by assets has posted a slight increase of its net profit by 2.9% in the past nine months.

The Bank announced its taxes had also increased from Rwf 4.1 billion to Rwf 8.3 billion in the nine months of 2016.

Nathalie Mpaka, Chief Finance Officer told KT Press, in the same period, the Banks net profit increased to Rwf 487.8 billion compared to an increase of 4.6 billion in its profit before tax.

Bank of Kigali had been exempted from taxes for the past five years when it listed on the Stock Exchange. However, taxes have since increased after the expiry of tax holiday.

“The bank has been enjoying a reduced corporation tax rate of 20% for the previous 5 years due to listing more than 40% in Rwanda Stock exchange. This year, corporate income tax rate returns to its normal 30%,” she told KT Press.

The bank was exempted up to 20% on corporate income tax instead of 30% it is supposed to pay.

Although, this is a positive development to the national treasury as more taxes are coming in, the bank is cutting an extra 20% from its profit before taxes, implying more efforts are needed to keep its profitability in balance.

The sector’s largest lender however still says this will not affect its profit margins going forward, another relief for its customers as well as the country’s financial sector that is shifting from traditional banking to technology led banking.

“We attribute the positive outlook in the nine months to our efforts to further embrace digital and branchless banking,” said Mpaka.

“During the year, we increased our distribution channels by opening 4 new branches and reached 1,240 active agents.”

The bank’s client balances and deposits totalled Rwf 392.7 billion in the nine months of this year which is an increase of 2.1% to date and 9.6% on annual basis.