It was a jubilant evening at Rwanda’s Radisson Blu and Convention Centre in the capital Kagali as 2000 members of Rwanda Private sector federation (PSF) met President Paul Kagame to share their success.

Every PSF member wanted to grab a microphone and tell the president how they will celebrate the end of year festive season, owing to a constant growth in business.

The Champion Investment Corporation (CHIC) shareholders that had met the president in the morning as he launched their Rwf 20 billion commercial building at Muhima, shared their experience on how they feared for their businesses but are now assured.

“We used to leave our shops in evening without expecting to find them safe the following morning. Dilapidated houses made of adobe bricks used to worry us; we feared not only thieves but also fire incidents,”said Mohammed Mazimpaka, one of the shareholders.

In 2003, the president known for regularly surprising the public by walking around streets of Kigali and witnessing trends around the city, invited the traders to his office to discuss how best they can do their business.

“I remember your Excellency challenging us to join hands and do something that would stand a lifetime achievement. We came up with a big dream that will never disappoint you and today, you personally witnessed it,” said Mazimpaka.

Several other local and international investors also shared their success, indicating how they rose from rags to riches.

To cement on their success, the traders said they wanted to give back to the community.

Through their One Cow Per Family committee, they handed over to the president their Rwf 1.1 billion ($1.4 Million) in contribution to the program.

PSF board chairman Benjamin Gasamagera told the President the target is to give 4000 cows.

Do not be belittled

To President Kagame, the PSF members testimonies represent the ‘Trust’ between government and citizens, which, he said, attracts many foreigners.

“The trust among citizens and their leaders are invaluable in transforming this country,” he said.

Such trust was exhibited 2012 when Rwandans stood up and inaugurated Agaciro Development Fund after donors froze aid to Rwanda expecting the country to become a miserable country like 20 years back.

From nothing in its coffers, the fund has grown to Rwf 36 billion as of June this year.

This compelled the president to tell the business community that Rwandan daughters and sons should never listen to statements that belittle them.

“If we had felt sorry for ourselves and believed we are too small to achieve, we would not be seated in this convention center.”

Confidence to make it should convince any Rwandan to always dream to achieve even much more, in this world of competition where quality of the products are a requirement.

“Achieving success begins with our mindset, believing in ourselves and the determination to achieve in the face of all odds,” the president said.

President Kagame summed up the forces behind country progress saying “ it is a result of placing trust in citizens. If you don’t work with and for the people, politics will fail.”

Despite success stories, the private sector officials told President Kagame one of the pressing issues in doing business in Rwanda remains payment delays in public offices after issuing tenders to contractors and this has a link with corruption.

A recent report by Transparency International Rwanda on service delivery through suggestion boxes exposed issues of bribes between some public servants and local contractors.

Respondents pointed fingers at public servants who demand kickbacks from them in order to process payments after winning contracts.

This, according to Transparency International, has resulted into contractors cheating on tarmac roads, important public buildings construction that crack barely after they are handed over or any project that stalls; with Civil servants in the dirt business.

“Almost all contractors said they are demanded to give kickbacks to local employees. Most of them say they end up failing to accomplish projects after realizing the amount of money they are asked for is higher than the expected revenue,” Ingabire Marie Immaculée, the chairperson of Transparency International Rwanda told KT Press earlier.

President Kagame said he is well aware such things exist among public officials who delay processes claiming to be busy and out of office, which should not be regarded as an excuse.

“Office is not a physical place…so there’s no excuse for not performing just because one has stepped out of office,” Kagame said amist applause from the audience

He warned both civil servants and contractors who play around tax payers money that heavy punishments await them.

The Rwanda Private Sector Federation has grown steadily for the past few years. 89 business associations had been created with 16287 members and Rwf155 billion initial capital. 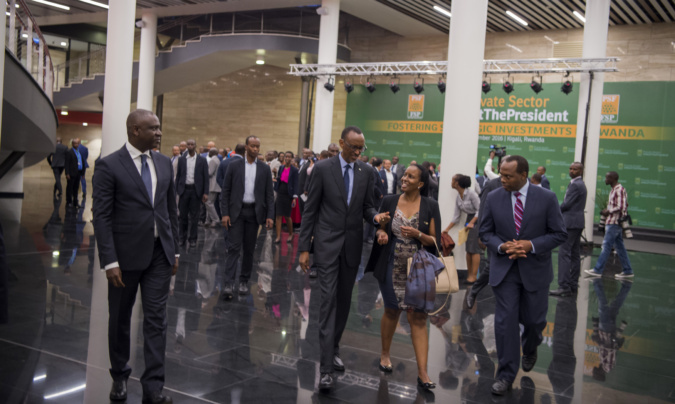 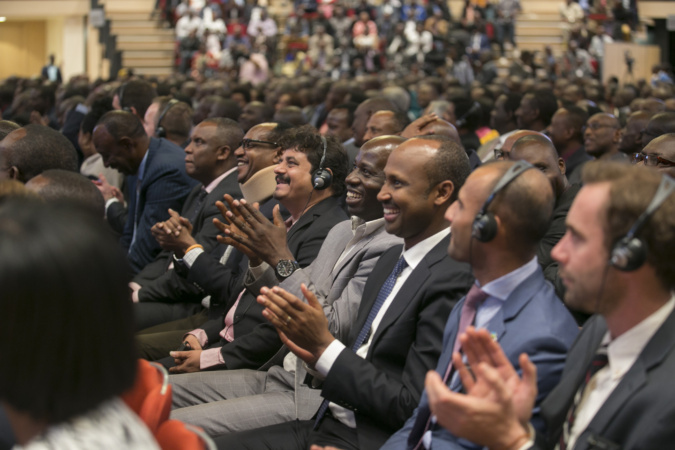