In 2016 the World Flocked to Rwanda to Decide Future 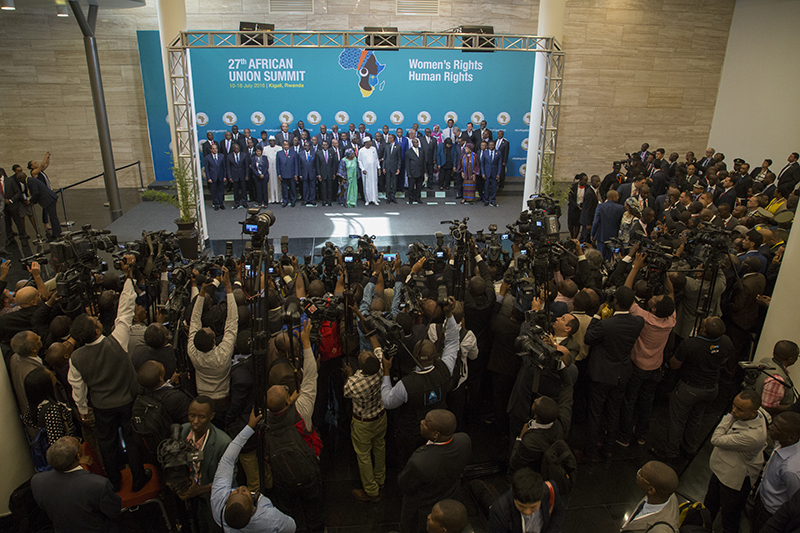 Rwanda has received important meetings, hosting important people like never before. It makes sense because the country was also ready than ever before. The meetings were interchanged with unique entertainments from talented performers. Of course this had to always leave a smile to the hoteliers.

KT Press has documented unique events that will be remembered.

More than 1,500 participants, including ten heads of state; gathered in Kigali for the 26th World Economic Forum on Africa that started on 11th -13th May.

The world economic forum took resolutions that will enable access to internet for 28 million people in the Northern corridor by 2018.

The theme of the Summit was: “2016: African Year of Human Rights with particular focus on the Rights of Women”

35 African Heads of State and 19 representatives with more than 3,500 delegates were in attendance.

Crucial resolutions that were taken include decision to put in place a fund that will end AU commission aid dependency in peace keeping operations – now financed by third party at 98% – and other AU commission’s activities.

Countries will raise a total $ 1.2 million annually that will allow Africa to contribute 25% on peace keeping under the “0.2 % levy” formula. It was proposed by Rwanda’s Dr. Donald Kaberuka.

The General Assembly tasked President Paul Kagame to reform the AU Commission and the Union to make them more efficient.

Moreover, the African Passport was launched and President Kagame and Chadian Idriss Debby Itno the current president of African Union General Assembly were the two first Africans to get the passport.

The president has since formed a committee of 8members made of experts. They have met more than three times in Kigali to do the job whose outcomes will be presented in January 2017 at 28th General Assembly, Addis Ababa, Ethiopia.

In Kigali, the General Assembly also AU took more time to search for Dlamini-Zuma’s successor as chairperson of Au commission after three candidates failed to raise required voices. Since then, more candidates joined the list. 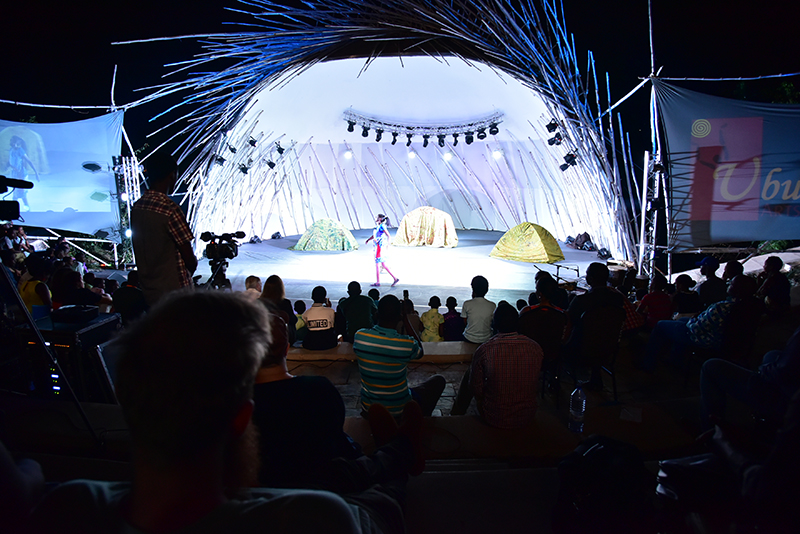 Ubumuntu festival that attracted up 18 countries including the United States

Ubumuntu – humanism, a festival that features life brought its second annual edition, in a country that was devastated by the Genocide 22 years ago. The festival took place from July 14-17 at Kigali Genocide memorial; where 250,000 victims of the genocide against Tutsi are buried.

18 countries performed under the slogan “I am because you are, you are because I am”. A stunning stage dominated by bamboo sticks and exceptional lighting remains unforgettable to many spectators.

The tournament was held in Rwanda between 16 January and 7 February 2016. A total of 16 teams played in the tournament which attracted 200,000 people.

The Country stadiums cannot accommodate this number but during the event, Rwanda removed visa fees, increasing the number of tourists coming for not only the games, but also other attractions of the African ‘thousand hills’ country.

Rwanda Development Board (RDB) estimated that a regular participant spent at least $189 (Rwf141, 089)

Rwanda’s Amavubi Stars lost to DRC in Quarter finals but its players showed a beautiful game that some of them were picked by regional teams including Ernest Sugira now in DRC’s Vita Club. On top of this, CHAN left the country with striking stadiums.

The 28th meeting of Parties to the Montreal Protocol opened in Kigali on the 8th -14th October, with more than 1000 delegates who represented different countries and organizations at the talks for a new global agreement on climate change.

The meeting’s main agenda was the amendment of Montreal Protocol. The move phased down greenhouse gases. It will avoid another 100 to 200 billion tons of CO2 emissions in the near-term to 2050. 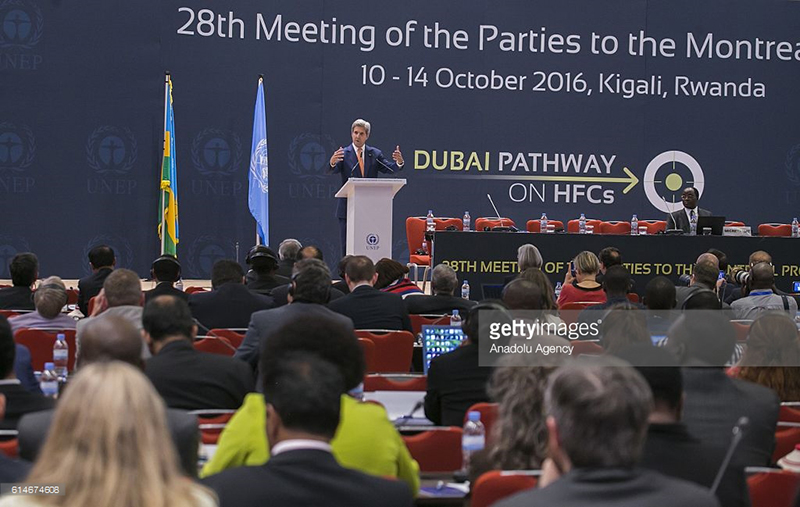 US Secretary of State John Kerry delivers a speech during the 28th meeting of the Parties to the Montreal Protocol in Kigali, Rwanda on October 14, 2016.

The two-day conference was attended by military, police and prison services female officers from 37 African countries.

Under the theme: “Women’s impact in security: rethinking strategy”, the conference was concluded with a proclamation and signing of the Kigali International Conference Declaration (KICD). In the declaration, African Security Organs made firm commitments and considerable  progress  to  support  the  move  to  end  violence  against  women  and  girls.

A stunning stage – made of bamboo sticks – was designed to encourage the public to environment conservation.

During the event, President Paul Kagame proposed to officials in charge of National Park Conservation to move from Gorilla naming event to naming lions, to underline the king of the jungle’s value to the country tourism.

Prior to Kwita Izina, a gala dinner was organized to raise cash for three conservation projects. Nigerian singer WizKid who was recognized for promoting conservation purchased two paintings worth $2,000. 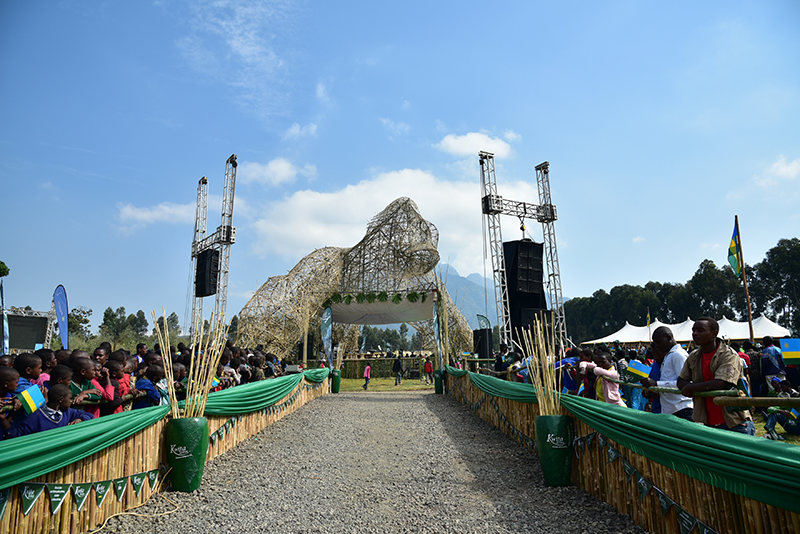 2016 came with plenty of innovation. There was this Gorilla-like stage at the Kwita Izina 2016: Naming Ceremony in Kinigi, northern Rwanda

The Hollywood actress’ visit aimed to better understand United Nations High Commission for Refugees (UNHCR) operations to ensure protection and assistance for over 165,000 refugees in Rwanda.

The princess held high level bilateral consultations with Rwandan Government officials on refugee matters and visited refugee camps. Among outcomes, of the high level meeting, Rwanda made it clear that a decision to peacefully relocate the Burundian refugees from Rwanda to another country remains.

Koffi Olomidé concert: The Congolese Music star landed on Kigali International Airport on December 28 for a concert scheduled on December 31.

This is probably the most expensive concert ever in the history of Rwanda, where tickets for VIP seats are hiked to Rwf500, 000. During the concert of the famous Ekoti te star, Rwandans will enjoy fireworks from the upper side of the Kigali Convention dome.

A total of 85 cyclists from across the world came to compete in the 8th edition of the annual Tour du Rwanda that commenced on 13th November 2016.

Rwanda’s Valens Ndayisenga became the first double winner of the Tour du Rwanda ever since it became a certified UCI cycling event. Like fellow Rwandans, Ndayisenga confirmed that the Head of State President Kagame did not work in vain when he gave team Rwanda the best ever bicycles a year before.

There was a lot to enjoy, a lot to be excited about the tournament but a picture that was taken by Plaisir Muzogeye, Kigali Today Ltd camera person in Karongi District of the country’s Western Province was a Must see. It is still circulating to date.

Rwandans and many Africans were excited about the 7th World Healthcare Students Symposium (WHSS) that was hosted in Kigali on November 2016.

The symposium attracted over 1000 youth from 40 countries across the globe.

In July, the annual International trade fair brought 271 local exhibitors and 148 foreigners from 17 countries of Africa, Europe and Asia at Gikondo Expo ground to exhibit what they do most. At least 270,000 visitors make it to the Kigali International Trade fair annually.

Rwanda is becoming an exhibition hub. Currently, Egypt and Middle East Expo, Kenyan expo, on top of Made in Rwanda expo are among the trade fairs that attract the crowd to one stop shopping center.

Rwanda Advocates Push For Detailed Inquiry into Death of Colleague