This year’s National Heroes Day basketball tournament gets underway on Friday with more men teams taking part in the challenge, as part of commemoration of Rwanda’s Heroes.

The tournament scheduled for January 27 to February 3, according to Rwanda Basketball Federation (FERWABA)  – eleven teams have been selected compared eight last year.

“All the teams have registered and confirmed participation” a statement from FERWABA said.

Defending champions Patriots BBC (men) are expected to put up a big fight . In 2016 they won the challenge in which they made their first appearance in the competition.

New entrants – Integrated Polytechnic Regional Centre (IPRC-Kigali) basketball club have been able to beat Patriots- to end their unbeaten run in the national league this season.

Ubumwe (women) team won last year’s tourney and all eyes will be set on these ladies as they fly hoops over their biggest contestants APR (women) BBC.

Meanwhile, Rwanda’s basketball is expected to have a boost in talent and more teams coming up this year, after government opened the national basketball academy in Musanze district in Northern Province this month.

This year, celebrations to mark Heroes Day will take place at the village level to encourage citizens participation.

Minister Sports and Culture, Julienne Uwacu announced this during a press conference organized yesterday on the preparations of annual National Heroes Day Commemoration, which will take place on 1st February under the theme- ” Heroism is making choice that fit us.” 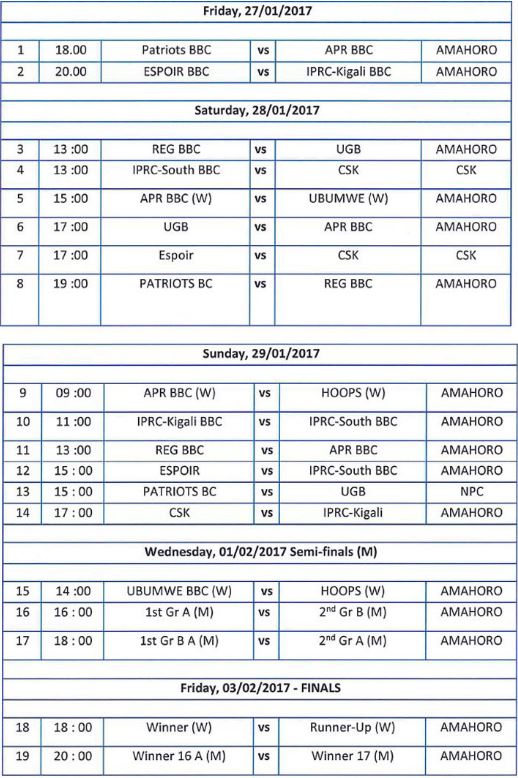