Right after the 1994 Genocide against Tutsi in Rwanda, one pastor Rutabandama Emmanuel walked to Church thinking it was a Sunday like any other where it is about preaching, thanksgiving and offerings.

To his surprise, both Hutu and Tutsi were seated separately but in the same church. At first he got confused, but he quickly recalled the horrible killings inside the same church.

“Tutsi were seated separate from Hutus, both groups avoided looking at each other; part of them felt guilty while the other part had been traumatized/victimized,” said Pastor Rutabandama who is still ministering in the same Anglican church.

The revelations were made on Saturday as thousands of mourners assembled to pay tribute to victims of the 1994 Genocide against Tutsi at Ruhanga, Rusororo Sector in Gasabo District.

The Anglican Church of Rwanda – Rusororo Parish was turned into a resting place for over 36,000 bodies. On Saturday, 52 other bodies of Tutsi were laid to rest at the same area after their recent discovery.

The congregation at Rutabandama service was battling a serious problem and a testimony by one Gad Musabyemungu 35, who talked to KT Press earlier before #Kwibuka23 indicates why they feared each other.

Massacres at Ruhanga were one of the worst during the Genocide.

According to Musabyemungu, currently a staff of Urwego Opportunity Bank in Kigali; all starts on April 7, 1994.

“Our hill was inhabited by many Tutsi and we all gathered at Ruhanga Protestant (Anglican) Church because we had already learnt that massacres had started,” Musabyemungu said.

History has it that church was safe haven in the past for the Tutsi who used to face persecution from agents of the then ruling power.

It was believed that none would afford to pursue someone at the “House of God”. As a matter of fact many Tutsi escaped killings in decades before 1994.

With this mindset, Tutsi from neighboring Kabuga in Gasabo, Muyumbu and Nyagasambu – Rwamagana District joined others in Ruhanga.

Two days later they were in thousands. The interahamwe started attacking them with machetes and traditional weapons, including Ntampongano y’umwanzi (the incorruptible cane), a name that was given to a big and heavy cane that was not supposed to exempt any Tutsi.

“Our parents were good at handling arks. For over ten days they resisted the killers until the Presidential guards were called to reinforce the team. Their first bullet targeted my father Juvénal Ntambika who died immediately,” Musabyemungu said.

This death was a warning to the family. They opted to seek another refuge from a nearby compound, believing that no killer would know their whereabouts, since all eyes were turned to the church. 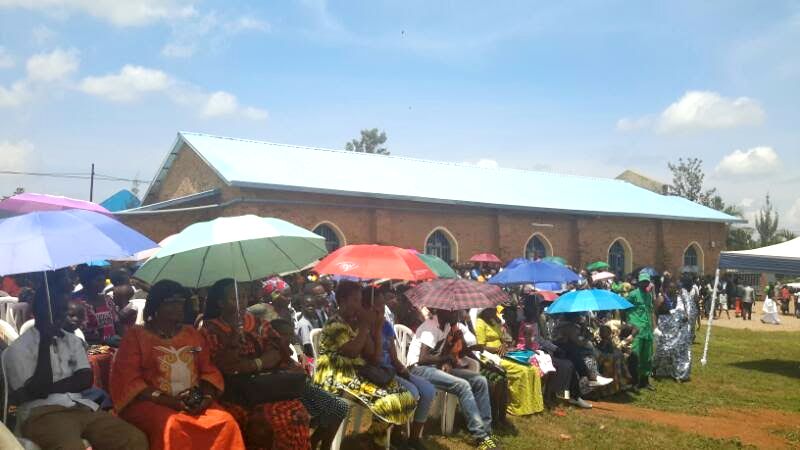 In a few days, the crowd at church was wiped out. Killers then turned to the compound where Musabyemungu’s family had sought refuge and first to be slaughtered was his mother.

Musabyemungu then a little boy understood that he was the next target and he miraculously jumped the fence.

His sister who was 10 years old tried to follow him but killers seized her and killed her with one blow.

From then, Gad hid in shrubs, trying to move some nights to find a fresh cassava to crack from the forsaken farms.

He recalls one day when he was hiding with his other neighbours, and the militia sent dogs to hunt them.

One of the boys showed up and the way he was killed, said Musabyemungu, is the worst memory I have for this tragedy. They ran after him and sliced him from the feet to the head.

In the bush at Rugende, Musabyemungu realized a military tank of government forces that used to target Tutsi at Ruhanga was no longer firing from Kabuga neighbourhood.

In a few days, Rwanda Patriotic Army (RPA) Inkotanyi rescued them and sent them to a transit camp at Nyagasambu in late April where he met his uncle, then a retailer.

In July, 1994, they resettled in Rugende and restarted life together. The following year, Musabyemungu returned to school but he would later stop so that he would go search for money after the death of his uncle. He became a street boy for 6 years.

Unexpectedly, he returned to school and joined university in 2009.

“I was the happiest at university; the monthly allowance, Rwf 5000 that I would save every month was for me, a fortune, and there, I would afford clothes.  For the first time in six years, I smiled.”

He dreams to always influence his neighbourhood to have a positive thinking and become good neighbors.

Meanwhile, Christians have now come together, reconciliation has been successful in Rwanda.

According to Rwanda Reconciliation Barometer 2016, an annual report by National Unity and Reconciliation Commission, up to 92.5% of Rwandans today feel that unity and reconciliation has been achieved and that citizens live in harmony.

During commemoration of the Genocide in Ruhanga, Speaker of Parliament Donatille Mukabarisa said Rwandans should avoid anything that can take them back into the dark past.

“There are laws, not like the other Hutu commandments. There are rather laws protecting all Rwandans, we are supposed to abide by them,” she said.

Mukabarisa requested security organs to take lawful measures against Genocide ideology whether during commemoration or any other time.