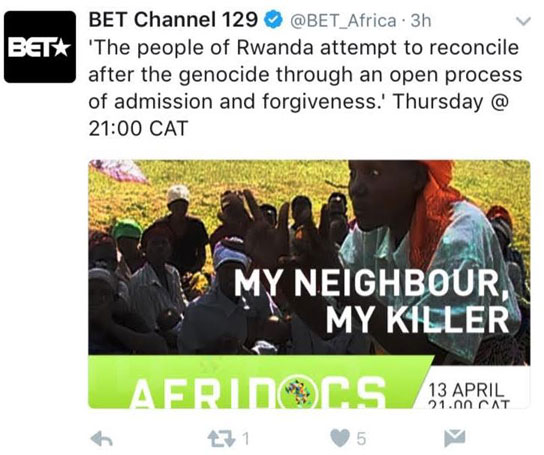 Rwanda will feature on BET – an American satellite television channel.

The highly watched channel will on Thursday screen a documentary film named; “my neighbour, my killer” as part of joining Rwandans in commemoration of the genocide against Tutsi.

The television channel has a wide audience of approximately 88,255,000 (75.8% of households with television) receiving the channel.

BET has taken into consideration the journey of Rwandans from mass killings to reconciliation by showing its audience a film that tells a story.

“The people of Rwanda attempt to reconcile after the genocide through an open process of admission and forgiveness,” BET said on its twitter handle.

The one-hour documentary screening of “my neighbour, my killer” is set on Thursday April 13th, at 21:00 CAT (Central Africa Time).

‘My neighbour, my killer’ captures the emotional journey to co-existence after home-grown justice system – Gacaca established 2003-2009 by the government to deal with crimes of the 1994 genocide against Tutsi.

The documentary will feature the impact Gacaca courts have had both on survivors and perpetrators after long-lasting accusations and anger between them.

The film was first produced in 2009 under the direction of Anne Aghion, an American award-winning documentary filmmaker, producer and director.

Meanwhile, Rwandans are commemorating Genocide against Tutsi #Kwibuka23 which started on April 7. The commemoration week is set to end on April 13.