Rwanda is back on the list of The Big Five nations after restocking 10 black Rhinos in Akagera national park in Eastern province.

The Rhinos were airlifted from South Africa. In total, 20 rhinos will be restocked in Akagera national Park.

In 1970s, Rwanda’s Akagera National Park had more than 50 black rhinos. The number disappeared due to massive poaching and later on during the 1994 Genocide against Tutsi.

African Parks, a conservation agency that manages national parks and protected areas on behalf of governments across the Africa in collaboration with the Rwanda Development Board (RDB) through funding from the Howard G. Buffett Foundation, today started flying in a founder population of up to 20 Eastern black rhinos to Akagera National Park in Eastern Rwanda.

The rhinos join seven lions reintroduced to the same park in 2015 from the same country, whose population has since more than doubled.

Welcoming the new gift to Rwanda, South African High Commissioner George Nkosinati Twala tweeted: “Rwanda is officially a Big Five nation once again. This is a fantastic day for the country.”

For Rwanda Development Board’s Chief Operations Officer, Emmanuel Hategeka, “The return of the Rhinos is also a sign of confidence in Rwanda’s conservation efforts and ability to protect them.”

Akagera National Park, which is a protected savannah habitat in Rwanda, has undergone a remarkable transformation since African Parks assumed management in 2010 in partnership with the Rwanda Development Board.

Claire Akamanzi the CEO of RDB said, the return of the rhinos to Akagera National Park “opens a new chapter in our conservation journey and we are grateful to all our partners that contributed to this achievement.”

Akamanzi added: “We are fully prepared to welcome them and ensure their safety for the benefit of our tourism industry and the community at large. We couldn’t be more excited for their return.”

Aboard airplane, the homecoming of the 20 rhinos from South Africa will last for the first two weeks of this month, according to RDB officials.

The rhino project is also supported by Dutch-based People’s Postcode Lottery and the Dutch Government.

“Rhinos are one of the great symbols of Africa yet they are severely threatened and are on the decline in many places across the continent due to the extremely lucrative and illegal rhino horn trade,” said African Parks CEO Peter Fearnhead in a communiqué released by Rwanda Development Board.

Rwanda however has taken serious measures against poaching.

Security measures have been implemented specifically to ensure the safety and well-being of the rhinos once in the park.

This includes an expertly trained rhino tracking and protection team, a canine anti-poaching unit, and the deployment of a helicopter for critical air surveillance to enhance protection of the park – all funded by the Howard G. Buffett Foundation. 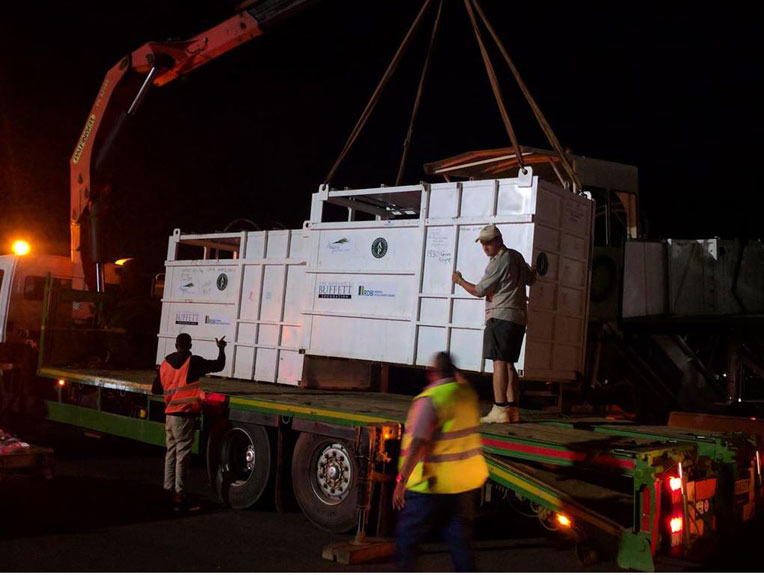 “Several years ago, as we were struggling to have success combating rhino poaching in other parts of Africa, I made a commitment to President Kagame that we would support the reintroduction of rhinos in Rwanda because we knew this country would protect them,” said Howard G. Buffett, Chairman and CEO of the Howard G. Buffett Foundation.

“Today marks another milestone in Rwanda’s emerging leadership on the continent in conservation, eco-tourism and most importantly, good governance,” Howard G. Buffett added in a communique.

With fewer than 5,000 black rhino remaining across their range in the wild, of which approximately 1,000 are the Eastern black rhino subspecies, this reintroduction is an urgent, progressive, and valuable opportunity for their conservation, and serves as a story of hope for the species.

Akagera national park  gazetted in 1934 is an extensive area covering 1,200 km² in eastern Rwanda, protecting animals and vegetation in three eco-regions – Savannah, mountain and swamp, among others.