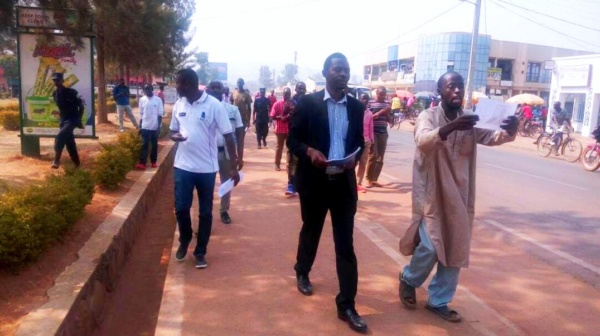 Philippe Mpayimana, the only independent candidate in the presidential race today launched his campaign in Bugesera district walking door to door seeking support from potential voters.

His campaign was supposed to start at 8am but Mpayimana was nowhere to be seen at the first campaign site.

There was no supporter waiting for him neither.

Time check 9.30am, alone and dressed in a black suit, shoes, and blue stripped shirt, Mpayimana arrived at the Nyamata venue in a white Corolla XE 100 saloon car.

An impromptu campaign manager, one Isaac walked around the street asking youths to come and listen to his manifesto. Around 150 people surrounded Mpayimana and took the lead to ask him what he had for them.

“What will you do about high taxes?” one asked.

“I will scrap all general taxes and remain with taxes on profits made on products or services. For example there will be no need to pay land taxes,” he replied.

“We were given cows by the current ruling power. And for you, what are you offering?” another voter asked.

To this one, Mpayimana answered “You will keep those cows, but I will teach you how to make good use of manure.”

At the end of the first trail in Nyamata, Mpayimana had managed to solicit between 100- 150 youthful citizens.

One by one, they came in. Others, mostly dressed in RPF colored T-shirts and caps, stood far but close enough to see the candidate.

If elected president, the independent candidate allegedly promised to hand Isaac a lofty job for managing to gather a group of citizens along the trial.

Even with a slow- lonely start off this morning, Mpayimana didn’t take a break. He immediately proceeded to Gashora trading centre to meet with the business community.

Mpayimana used no microphone but his natural voice as he spoke to the traders and about 100 onlookers. He said he knows to use a few resources on his disposals economically.

“It takes more than courage. No party uniforms, no flags, no loudspeakers, but we will slowly mobilize people along the campaign” Mpayimana said.